Action Figure Review: The Joker from Batman Missions by Mattel 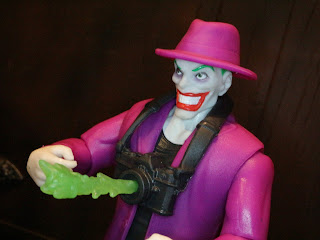 It's been about a month since I reviewed Harley Quinn from Mattel's new evergreen Batman line, Batman Missions, and today I'm going to be reviewing another figure in the line: The Joker! I actually got the Joker around the same time as Harley but somehow he got stuck on the back burner so I'm reviewing him now. Interestingly enough, I just saw these figures on store shelves for the first time this past week. Target had a small peg of these (mine only had two figures) in their new reset of the toy section, so if you're looking for these in stores that's the first place to check. Pretty much every Batman line includes a figure of the Joker but it's still always interesting to see what toy companies do with him. Let's check out Mattel's new version of the Clown Prince of Crime after the break... 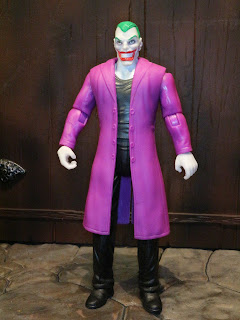 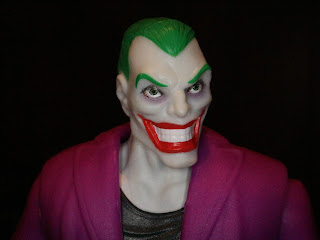 * I really like the headsculpt on this version of the Joker. It's a bit stylized but it captures all of the standard comic inspired Joker beats: Crazy eyebrows, a terrifying gaze, and a wickedly large grin. The paint work is quite strong here and really helps sell the figure. 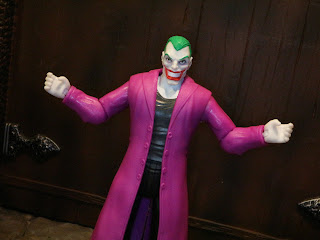 * The articulation scheme for this line seems to be to give the upper body pretty decent articulation while the lower body is pretty basic. The arms feature swivel/hinge joints at the shoulders, elbows, and wrists which allows for some fun posing and play. Again, these are totally designed for kids but I suspect that many collectors will work these in with their other Mattel DC lines, like DCUC and Multiverse. 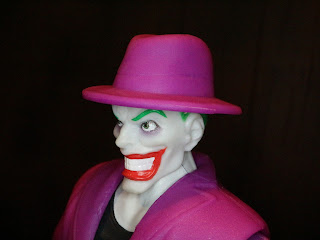 * To match his purple trenchcoat the Joker includes a bright purple fedora. I love Joker figures with removable hats as it reminds me of my original Toy Biz Joker from their 1989 Batman line. It fits well and looks pretty good on the Joker's head. 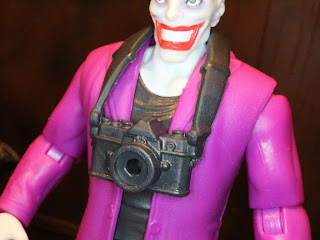 * Perhaps inspired by The Killing Joke, the Joker includes a camera. Whether he's taking disturbing pictures or just sightseeing, it's a pretty cool accessory that easily fits over around his neck. 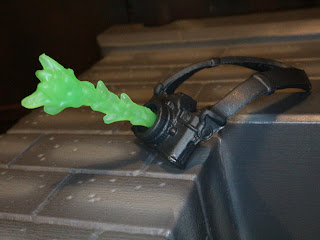 * The coolest part of this figure is the little spurt of translucent green acid that can be plugged into the camera lens. It turns out that this is a trick camera that can spray acid at the Joker's victims. To quote the title of an R.L. Stine book: Say Cheese and Die! 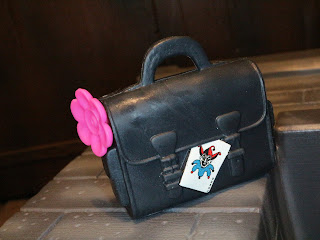 * The Joker's fourth accessory is a briefcase that has a Joker card sticking out of it (very nicely rendered too, I must say) and a pink flower poking out of the side. My guess is that this innocent looking briefcase actually is intended to spray Joker gas out of the side. Wicked, indeed. 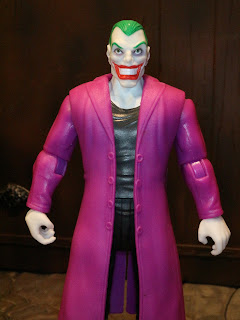 * I gotta admit that while I like the colors and the headsculpt of this figure, I really just do not like the mixture of the purple trenchcoat with the more casual looking black shirt. It's just...odd. Some buttons on the shirt or a collar would have been OK, but they overall appearance just seems really off. 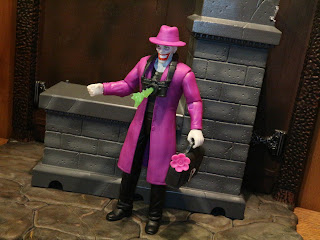 While I don't like the look of this figure overall as much as I like Harley Quinn, the pretty generous number of cool accessories absolutely give the Joker a bit of an edge. I just wish the Joker's shirt looked a bit classier rather than just looking like a t-shirt. Other than that, this is a pretty cool Joker figure that is really quite fun to play with, particularly due to the acid spraying camera. I'm really excited to see if Mattel can keep this line going for a bit and can continue to dive deeper into the Batman roster. If so, they could have a pretty solid line on their hands.

I've reviewed so many action figures of the Joker that he has his own review archive! Check out The Joker's Funhouse for more reviews!

For more reviews from Mattel's Batman Missions, check out the following:
Harley Quinn