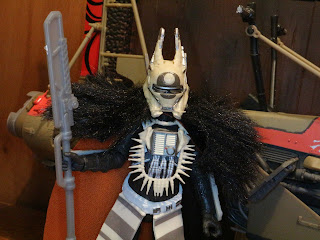 Solo: A Star Wars Story is probably tied with Rogue One as my favorite Star Wars film of the Disney era (I need to give it a few more watches) but I think it is safe to say that the release of Solo, as a whole, was an absolute mess. Where do I begin? The toyline launch was sparse and incredibly confusing (many retailers didn't seem to know of any street dates/ launch dates), the film's marketing seemed to struggle in winning over movie-goers, and the film came out less than six months after another Star Wars film (the ever polarizing The Last Jedi). For whatever reason, this caused the film to bomb at the box office, which really sucks. Of course, we're here to talk more about the toys rather than the film and today I'm checking out one of the most mysterious characters from the film: Enfys Nest. Well, Enfys Nest and her Swoop Bike. Enfys Nest, played by Erin Kellyman, was marketed as a very mysterious character (with her gender hidden until the film was released) but, oddly, Hasbro didn't release her until a couple of months after the film hit. She shipped in July and I've been meaning to get around to check her out. Let's take a look at the fifth release in the Black Series Phase III "vehicle" sets after the break... 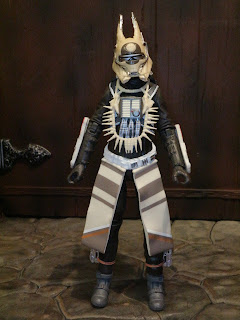 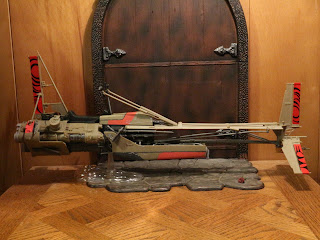 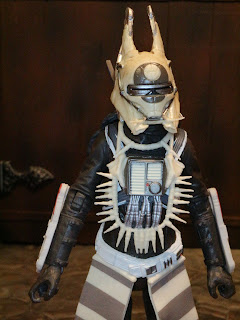 * Enfys Nest is an incredible looking figure. While the release of the Solo line felt botched, the figures have all been winners thus far and Enfys Nest is no exception. This is the only way to get her currently and even if you're not interested in the giant swoop bike, the figure itself is just too tempting. I love that her chest armor and gauntlets are separate pieces fitted over the sculpt; it gives her a much more realistic appearance. 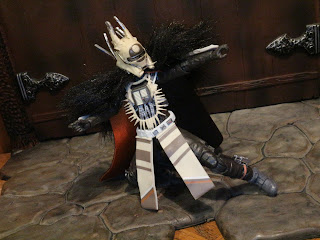 * Enfys Nest is as well articulated as nearly any other Star Wars: The Black Series figure, and possibly even more so thanks to having a balljointed neck and a double balljointed head. All of her joints have an excellent range of motion and she feels solid and sturdy. Whether you zoom her around on her Swoop, pose her in battle, or just have her chilling on your shelf, Enfys Nest is up to the task. 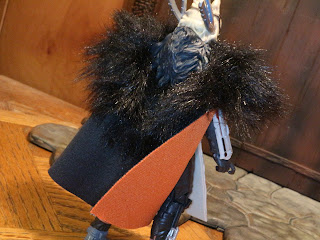 * Enfys Nest includes this soft goods cape that is covered with bantha fur to give her a fiercer, more animalistic appearance. The cape is removable if you pull the head off (it isn't hard) and it looks great. The fur sticks up a bit more than it should but the overall look is quite impressive. 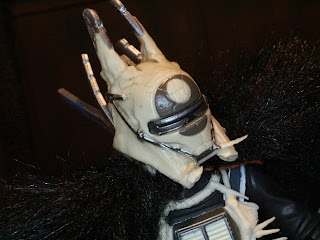 * Enfys Nest's helmet is well sculpted and looks pretty fierce. There are is an array of antennae on the helmet, a breathing tube of some sort, and an identity obscuring visor that is supposed to be Ubese in design. The visual guide for Solo suggests that the white circle against the darker background on the front of the helmet symbolizes a reverse eclipse, thus representing the Cloud-Riders' mission to dispel darkness with light. If you look carefully the poetry on her helmet is carved in, but there isn't a wash to bring the detail out more. 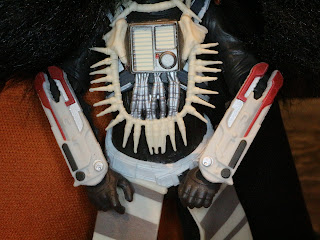 * The armor looks excellent. While the shield gauntlets don't spring open into shields (although the Vintage Collection figure includes this feature via swappable gauntlets) they look nice and feature excellent paintwork. The same goes for the chest decorations which include a vocoder and a tribal like necklace. 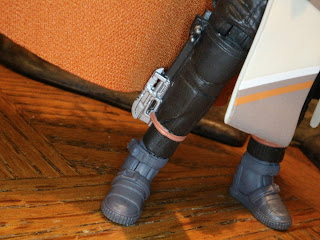 * Above her boots you can clearly see the repulsorlift boosters that Enfy Nest wears to enhance her physical abilities. They're quite nicely rendered. 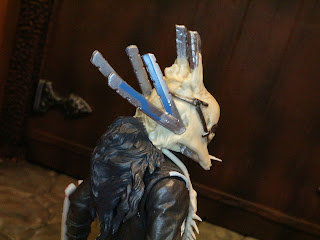 * With the cape off you can see more of the back of the helmet and the cool details here. Also, you can see a long mass of black hair here. I think this is supposed to be part of the helmet or part of the cloak as it doesn't look at all like the character's hair when she finally takes her helmet off. 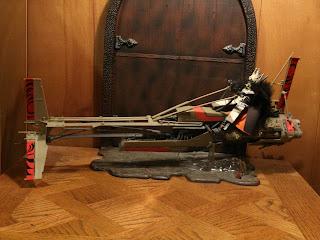 * Now, let's take a look at the Swoop Bike. First off... this thing is huge! It's longer than any of the previous vehicles from the Black Series and is nearly as long as the First Order Special Forces TIE Fighter! I'm still trying to figure out a good spot to display this beast! The vehicle does come unassembled in the package as you will have top put together the handlebars, outriggers, and trihedral steering banes. 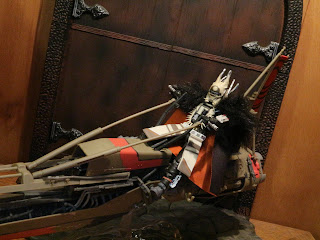 * Enfy Nest looks pretty awesome riding on this! She fits on here well and can easily grasp the handlebars and place her feet on the foot pads. 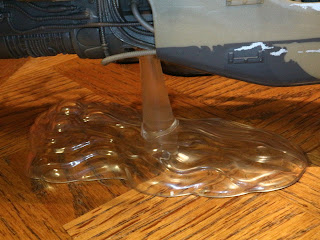 * Like the previous vehicles such as Rey's Speeder and Luke's Landspeeder, Enfy Nest's Swoop Bike comes with a translucent plastic "levitation" effect to keep the vehicle floating off of the ground. It doesn't work as well in severely tilted poses as the others due to the larger size but it typically gets the job done and looks cool doing it. 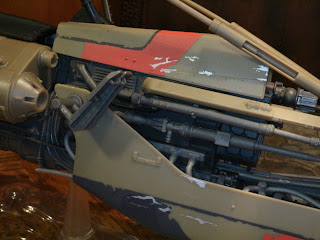 * Hasbro did a nice job off adding realistic look paint scratches and dents onto the Swoop Bike. 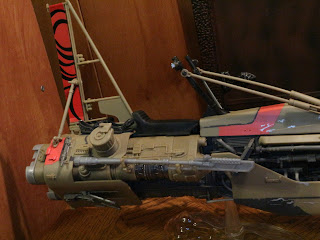 * Another cool feature of the Swoop is that Enfys Nest's electroripper staff can easily fit into storage hooks on either side of the accelerator seat. 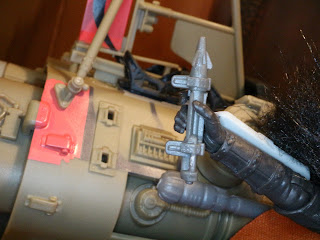 * Both sides of the engine housing have these little harpoon like devices attached. They easily slide out and seem like they might be the tri-barb harpoon rockets that would be used for the K21C portable launchers the Cloud-Riders use. They're removable, so they make for cool little extra accessories. 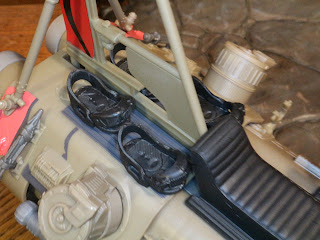 * The top of the engine housing has these little foot stirrups that would be used to hold other Cloud-Riders onboard the Swoop. I'd love to receive a few more of the Cloud-Riders (heck, I want every last flipping one of them) in order to deck the Swoop Bike out. 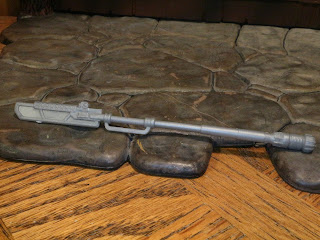 * Enfys Nest's Electroripper staff is just really, really plain. Maybe if it had been molded in a better silver color or given even one paint application it would have been ok. As it is, it looks on par with something from the Power of the Force II era which I love but which I expect improvements on in the Black Series. 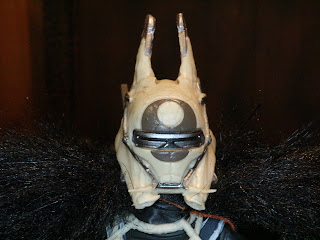 * So... Enfy Nest came out around two months after the release of the film. Can anyone explain why she doesn't have an alternate, unmasked head? I don't know if the fault lies with Hasbro or Disney but this is ridiculous. At this point I do hope for a second release of the figure which includes an improved Electroripper staff, extended shield gauntlets, and an unmasked head. 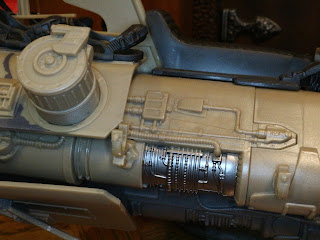 * Unlike the previous vehicles, the paintwork on the Swoop bike overall seems weaker. I'd expect more detail here on the power cells and various engine parts but the paint work is pretty limited. 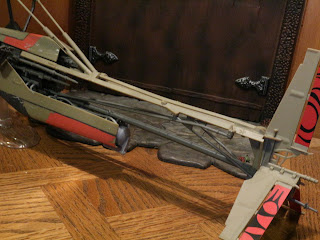 * The overall plastic quality of this vehicle feels inferior to previous releases as well. The main steering vain just feels overly light and cheaper than other releases in the line. It's a bit of a pain to put together, too, as it just doesn't want to stay on quite right. Once you get it, it'll be fine, but it took some finagling. 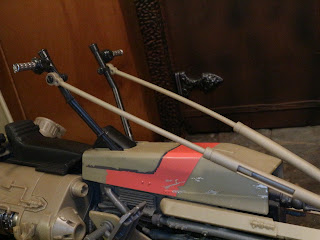 * Another thing about this set that drives me crazy are the handlebar linkages. You put these together and they work kind of like a piston, but moving these up and down causes them to bend. Again, these just feel really inexpensive and more like something you'd find in a $15 or $20 dollars 1/18th scale vehicle than on a $60 collector's piece. 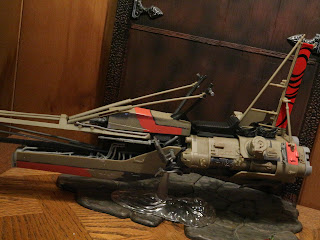 * Overall the plastic quality and paint quality of the Swoop Bike just doesn't feel up to the usual standards of the Black Series. The previous vehicles have all been amazingly well done but Enfys Nest's Swoop Bike feels like a step down. 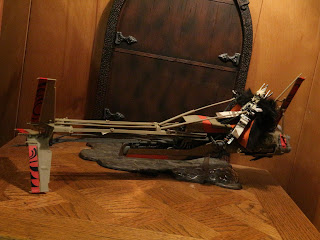 Enfy Nest is not only of the most interesting characters from Solo (I really want to see more of her and the Cloud-Riders in future novels and comics) but she makes for one of the best action figures from the film thus far, too. The Swoop Bike is...just ok. It's not a complete travesty but it definitely feels like it is an inferior product when compared with something like Rey's Speeder or the Dewback set. Considering the price, it's a Good and a 1/2 set. Still nice but not a must have unfortunately. Of course, a little shopping might get you a better deal (I preordered mine through Amazon and only wound up paying around $45 dollars in mid July). While the film's Wookie Weekend toy launch was buggier than a summer night on Dagobah, Hasbro seems to still be committed to offering Solo stuff, so hopefully we'll see another Enfys Nest and more Cloud Riders in the future.