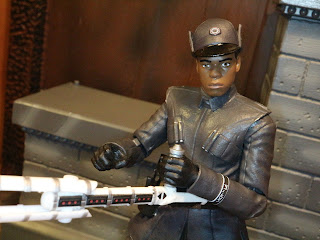 I was fortunate enough to snag some new Star Wars: The Black Series figures off of Ebay last week and I'm looking at the second figure in the quartet I purchased: Finn in First Order Disguise. Apparently at some point in The Last Jedi Finn will go undercover into First Order territory, which makes sense: Being a former Stormtrooper, the guy knows the First Order inside and out. I've always loved disguised versions of "disguised" Star Wars characters (I still want Jyn and Cassian in their Imperial disguises from Scarif) and Finn is another entry in that long and storied tradition. Does he pass muster, however? Read on to find out... 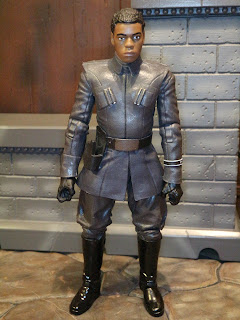 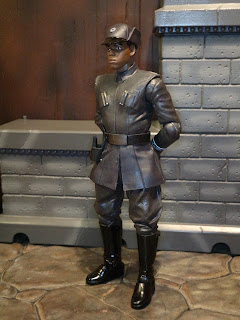 * Finn is as well articulated and durable as any other newer Black Series figure. He can take any number of battle poses or just stand around looking official. It's your choice, really. 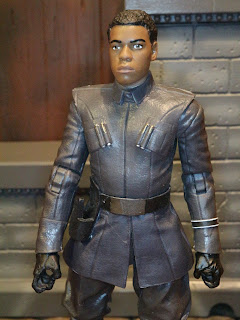 * Here's a shot so you can see Finn's costume. It's a grey First Order officer's uniform. Probably a mid-ranking officer if I had to wager a guess. The sculpt is pretty solid and shows off quite a few details on the body. I also like the holster attached to the belt. It's not removable and doesn't shift around, but it's entirely functional. 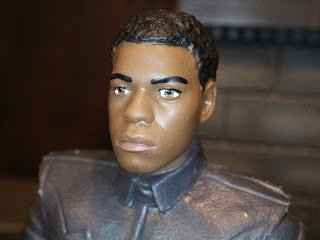 * While Hasbro's efforts to capture Daisy Ridley's and Oscar Isaac's likeness have been so-so, Hasbro has done a pretty decent job with John Boyega. This looks quite a bit like him. 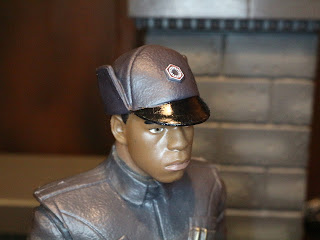 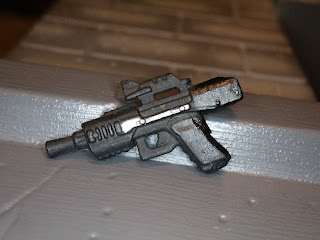 * He also comes with a black and silver SE-44C blaster pistol. This is a slightly modified version of the pistol the First Order Stromtroopers carry. It looks great in both Finn's right hand when blasting space fascists or when stowed away in the holster on his right hip. 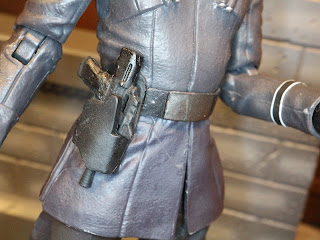 * And here's a quick shot of the blaster in the holster. I love it! 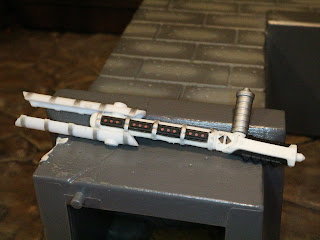 * I love the fact that Finn carries the Z6 riot control baton that FN-2199 (aka TR-8R) wielded against him on Takodana in The Force Awakens. This version of the Z6 is much better than the one that came with the Riot Control Stormtrooper in 2015: Not only is the paint and sculpt better but the front two contact conductor vanes actually swivel out, meaning this accessory can be placed into "active" mode. I just wish it had some energy effects like the Executioner Stormtrooper's weapon. 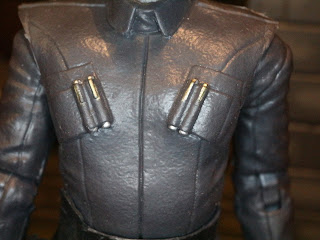 * These code cylinders on Finn's chest look kind of under-detailed. The sculpt is too soft and the paintwork seems a bit sloppy. 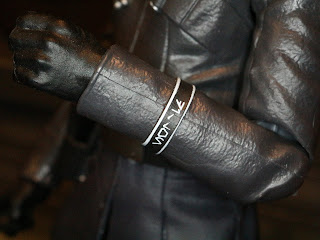 * Here's something that should have been a positive but instead turned into a negative. The First Order officers wear the name of an Imperial hero, Dillon, on their uniforms. Unfortunately, the "leths" on the aurebesh writing on Finn's left sleeve are a bit sloppy and missing some of their features. Love the attempt but the QC on mine is a bit weak. 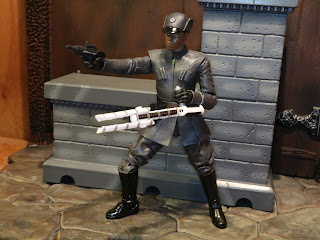 Finn in First Order Disguise is a pretty great figure. The articulation is good, the likeness is on point, and the accessories are quite plentiful (and somewhat functional thanks to the articulated Z6 baton). While I doubt this will be his most prominent outfit from The Last Jedi, I hope the scenes involving Finn infiltrating the First Order turn out to be quite memorable. This is a Great figure with a lot to offer. Check the writing on his sleeve, if you can, but otherwise you should be good!


If you're looking for another Finn review, check out my reviews of the Black Series Finn (FN-2187) and Finn (Jakku), as well as the micro figure of Finn included with the Micro Machines First Order Star Destroyer playset.

If you're looking for more Black Series Phase III figures, check out the following: