Hell in a Cell 2016 Special: Braun Strowman from WWE Elite Series by Mattel 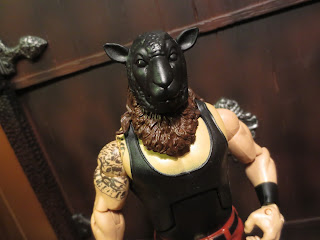 It's Halloween Eve (so All Hallows Eve Eve) and guess what I'm doing? Getting ready to watch some Hell in a Cell, baby! Tonight is the WWE Raw Hell in a Cell 2016 event and to commemorate this, I'm doing a special review of someone who may or may not be in the event: Braun Strowman. I've written a number of these special Halloween reviews a good bit in advance (I think I started in late June or early July this year) and I'm writing this one about 1 week and 1/2 prior to the event, so not everything on the card has been announced yet. Considering the run that Braun Strowman has had lately, I wouldn't be surprised if he does get a match. Strowman is a beast and WWE finally seems to be using him in a way that makes sense lately. This is the first Elite Braun Strowman figure Mattel has released and it's part of series 44. I'm a huge fan of the Wyatts and, while Braun isn't really with them right now, this figure represents the time when he debuted with them as Sister Abigail's black sheep. Let's take a closer look at the Abominable Strowman after the break... 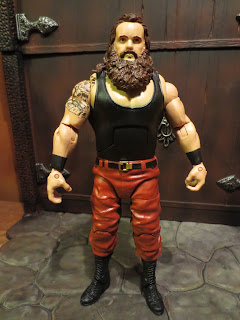 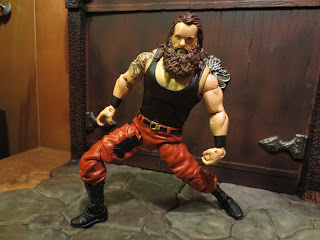 * Strowman is a massive guy (6 ft 8in and 375 lbs) and Mattel made him suitably large as an action figure. I compared him to a few other WWE figures I had standing around on my current champions shelf and he's noticeably taller than Bad News Barret (last King of the Ring), Kevin Owens, Dolph Ziggler, or any member of the New Day. He's got the same solid articulation of any other figure, though. 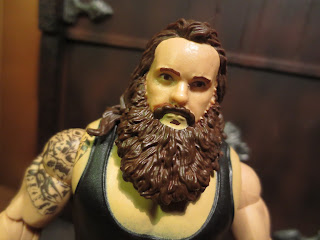 * It took me a while to decide if this headsculpt actually looks like Strowman. After a lot of comparisons between it and pictures of the Superstar, I think it actually does. The sculpting on the hair and beard is pretty good with quite a bit of detail. I do, however, think this is an odd choice for a Strowman likeness. Strowman is a pretty expressive guy and he usually makes faces like this or this. I actually like expressive faces on my wrasslin figures, but I get that everyone doesn't. 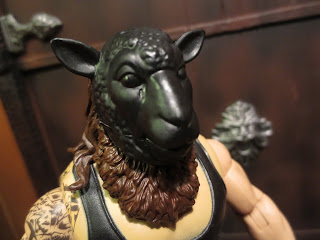 * Sister Abigail's Black Sheep comes with his sheep mask. It's pretty similar to Erick Rowan's mask although it takes a bit more finagling to get it to stay on Strowman's face due to his massive beard. It looks pretty cool on him, though. Whether or not you like wrestling, there's something to be said for an action figure of a big tattooed man wearing an animal mask. It feels like something out of Manhunt. 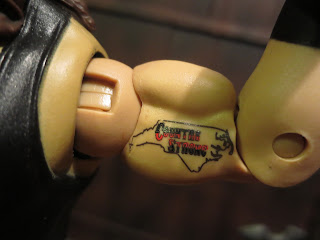 * Strowman is billed as coming from Sherrills Ford, North Carolina, and I'm assuming that's legit because why else would someone have a North Carolina tattoo with the words "Country Strong" if they weren't really from the state. Adam Scherr (Strowman's real name) was a competitive strongman prior to joining WWE, and has won numerous competitions. The "Country Strong" tattoo makes a lot of sense in this context. 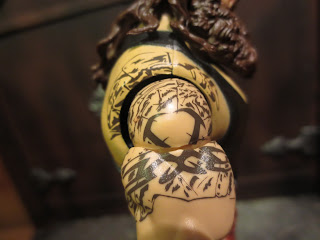 It's missing. Honestly, this has to just be a licensing issue and I really don't imagine Mattel is to blame for this one (a phrase no one else has probably ever said before). Licensing issues can be tricky. Remember how most Sloth figures never had the Superman logo, either? 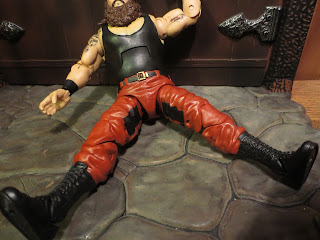 * I really dig Strowman's pants. Mattel did a great job of capturing his distinctive pants here, even painting on the odd black patches on the inner thighs. The colors look good, though, and capture the new look of the former Rosebud quite nicely. 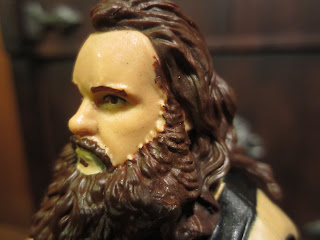 
* There's some kind of messy paintwork on the side of Strowman's face and beard. It's nothing huge, but it's noticeable if he's not wearing the sheep mask. 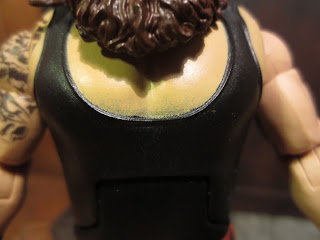 * The paint work on Braun's chest is really, really messy. Look at that line between his tank top and his chest? It's not like that on the back but it's really an eyesore from the front. 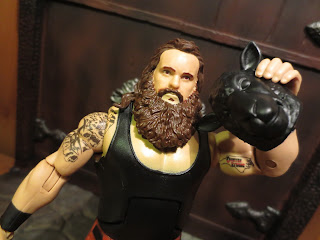 I was really looking forward to the release of the Elite Braun Strowman but, I have to admit, I'm a bit disappointed. I'm glad Mattel went all out here with lots of new parts to capture his massive appearance, but there are just lots of little things that bring this figure down in my eyes. Some sloppy paint apps, a mask that's tough to get to stay on, and a oddly chosen facial expression. Strowman isn't terrible, but he's not as good as the other Wyatt family figures we've seen released in the Elite series. He's a Good and a 1/2 figure still, but I wanted greatness.

Keep checking back here every day in October for more Toy Terror! Also, make sure to check out the Toy Bloggers United contest being hosted here this month! For more 31 Days of Toy Terror, check out my Hokey Halloween Horror page for spooky fun from 2016 and years past!
Posted by Barbecue17 at 10/30/2016