31 Days of Toy Terror Lives: Batula (Midnight Special) from The Worst by Super7 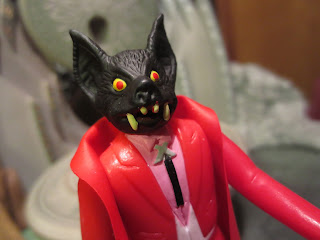 I bet you thought the faux retro-action figure craze was over, didn't you? I know I haven't purchased one in quite some time (maybe not since last year that I can remember off hand). When Funko and Super7 started the trend with their follow through of the Alien line Kenner originally designed and tooled but never released, the faux retro craze hit and spread wide, albeit with mixed results. Now it seems to be more refined and we have an incredibly cool line of faux retro action figures with Super7's The Worst. This is a series of random villains that "kind of but not really" resemble various pop culture monstrosities and which can fit into any retro action figure collection. Currently Super7 is offering an early version of the 6 figure series with unique paint schemes called the Midnight Special Set. I picked this set up as I love this concept of a line of random villains with no context. My favorite retro action figures are on display as just a bunch of random villains hanging around, so The Worst already have a home in my collection. Ready for a closer look? Then join me after the break as we check out Batula as part of 31 Days of Toy Terror Lives! 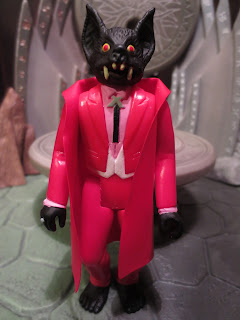 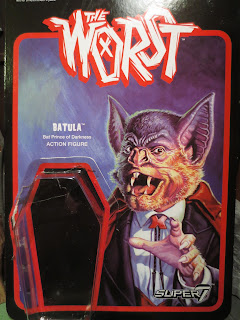 
* If you read this site regularly, you know that packaging has to be pretty special for me to bother mentioning it. The Worst has some incredible card art and is absolutely worth mentioning. Featuring illustrations of the characters by Ed Repka, a prominent illustrator of album covers, these cards really bring these characters to life. Without this art and a glimpse into the "idealized" versions of The Worst, I don't think these figures would have half the appeal they do. 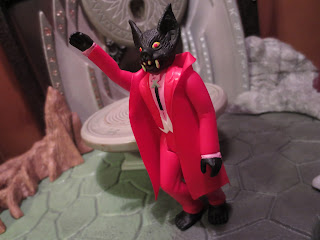 * If you've ever picked up a retro figure like this, you know what to expect: 5 points of articulation and all swivel joints. He feels quite well made, though, and he is standing in a bit of a crouch. It gives Batula just a but of a pose, as if he's getting ready to burst into flight, and makes him feel a bit more unique. 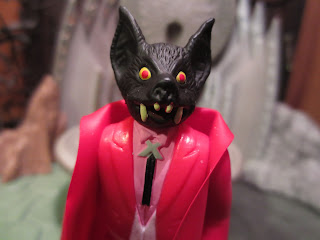 * Essentially Batula is a bat in a Dracula-esque suit. Check out that face, though: He's just really crazy looking. Heck, given a different cloak he would fit perfectly into the vintage Kenner Creature Cantina. He's a good horror character and his role as the "Bat Prince of Darkness" cannot be understated. Maybe he's Dracula's brother-in-law or something? Or they're rivals. Can't you see this guy starring on film watched on an episode of MST3K? 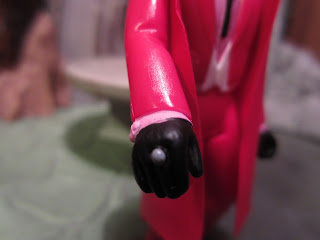 * While these are very basic sculpts, cool little details like this ring on Batula's right hand definitely stand out. Little things like this are just interesting and you know that if these were true vintage figures, you would have made up some cool story about what that ring was capable of and how Batula got it. 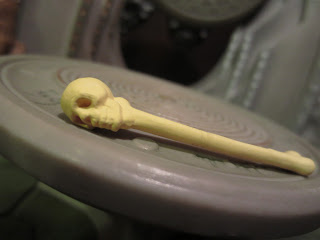 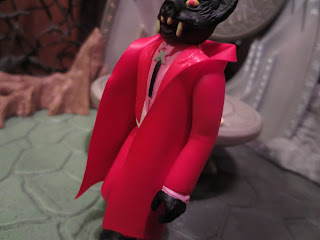 * I know that plastic capes are a trope of vintage 1/18th scale toylines but I'm always concerned about how they're going to hold up. This one feels pretty sturdy, but I wouldn't try moving it as it seems permanently attached.  I do wish it were black, though. The standard Batula is supposed to have a black suit with a reddish orange cape, so a black cape would have looked really cool here. There's way too much red here. 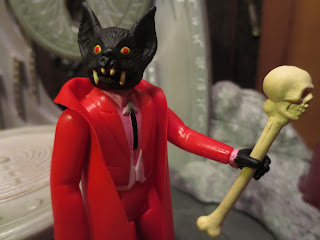 If you're not into the whole retro figure trend, I doubt you'll care much for these guys. They're just not for you. If you are into that style, though, The Worst really has a lot to offer. It's interesting seeing some unlicensed characters mixed in with your various other toylines. Batula can hang out with the Universal Monsters, keep Cthulhu company, or challenge Chewbacca to a game of Dejarik in the cantina. They're like a mixture between retro figures you owned and the high end artsy mashup figures you probably don't. Batula's a Good and a 1/2 figure if you're craving a Dracula who is now more bat than man. Hey, wait a minute; this is just another Batman variant, isn't it...

Keep checking back here every day in October for more Toy Terror! Also, make sure to check out the Toy Bloggers United contest being hosted here this month! For more 31 Days of Toy Terror, check out my Hokey Halloween Horror page for spooky fun from 2016 and years past!
Posted by Barbecue17 at 10/20/2016