Action Figure Review: Night Stalker from Masters of the Universe Classics by Mattel 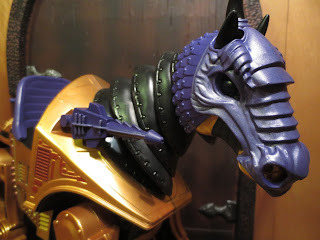 While we're less than three months away from Mattel and MattyCollector abandoning Masters of the Universe Classics (although Super7 will be picking up their slack) it's refreshing to see that one more steed has made it into the line: Night Stalker, the Evil Armored Battle Steed. Night Stalker was available in the vintage line and he, along with his heroic counterpart Stridor (who is exactly the same as Night Stalker with a different color scheme), seemed to be toys that everyone owned. While I don't have my vintage Night Stalker any longer, I do have a vintage Stridor. Of course, that doesn't mean much since it's Night Stalker who is getting an overview today. The Evil Warriors have definitely been light on vehicles and support so it's good to add this mechanical steed to that faction. More vintage inspired fun after the break... 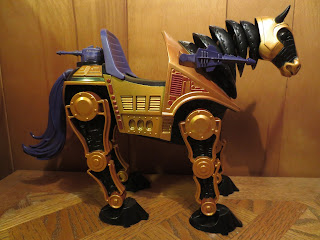 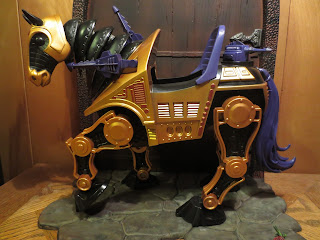 * While the vintage Night Stalker just stood around and looked cool, this guy is fully mobile. Not only does he have joints on each leg (ankle, knee, and hip) but they actually look to have metal centers to help improve their durability. While he can't rear up on two legs without support of some sort, Night Stalker is pretty well articulated and can definitely stand in a number of poses with at least one foot off the ground. 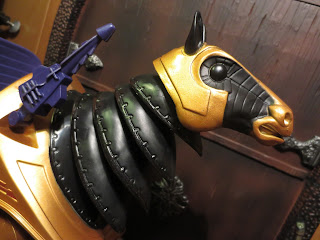 * One of the coolest new articulation features on Night Stalker is his neck. It's actually a segmented, armored neck with five separate balljoints. It looks great and it highly functional. Again, while the vintage Night Stalker toy was largely immobile, this guy is a fully articulated figure. This is a great design element! 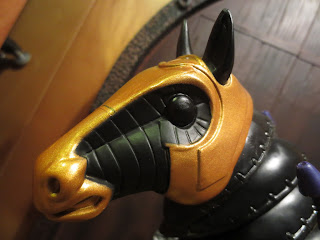 * Night Stalker looks exactly like what you'd expect him to look like: An upsized and somewhat more detailed version of the vintage toy. The round black eyes and ears definitely make this head look like a regular organic horse but the metal bans running up and down his face betray that there's a lot more going on here. 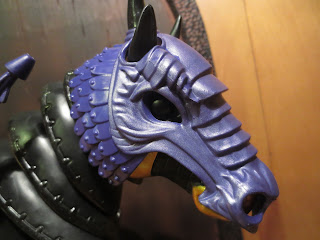 * Similar to how Panthor received some new headgear, the Classics version of Night Stalker has been given a new helmet which the vintage figure didn't have. This is a really cool piece and it easily fits over Night Stalker's head to give him a more warlike appearance. The plate metal armor on it definitely has a bit of a medieval flare, something that stands out against the concept of a metal warhorse. It's those juxtapositions that make Masters of the Universe so much fun, isn't it? 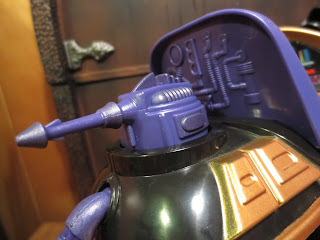 * Night Stalker literally has a tail gun; you know, as in a turret mounted above his tail. I love this gun for some reason (I loved these on the vintage figure, too) and it looks great here. It rotates freely and even has a few metallic pant applications to add some further depth to the sculpt. While it would have been cool to see this moved onto a balljoint, I still love this feature. 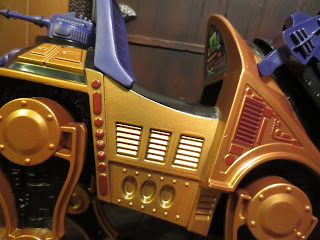 * The exterior of Night Stalker is really nicely sculpted. He feels quite durable and looks like a formidable piece of equipment. I love the bronze color of his body and the various metallic paint application covering him. This is a really nice looking vehicle/ mount and it makes a great first impression. 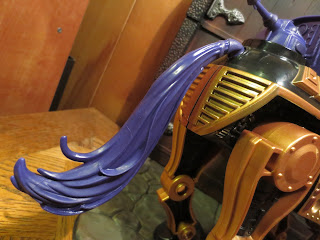 * Night Stalker not only has a long, flowing purple tail, but it's also on a balljoint. 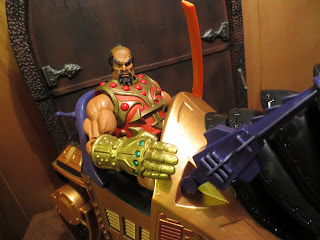 * Night Stalker has a pretty big cockpit to fit most MOTUC figures in. Obviously I had to test him with Jitsu, since the two were sold together in the 80s, ans I'm glad to sat that they look great together. Night Stalker doesn't have a real cockpit or seat for riders; it's more of hollowed out space for the figures to fit into in kind of a half crouch. It looks good from the outside, though, and that's what counts. Just a thought: Isn't interesting how Night Stalker's purple matches with Fisto's highlights and sword while Stridor wears the same orangish color as Jitsu? 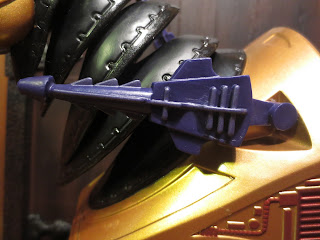 * I love the idea of the two laser cannons on the front of Night Stalker but the execution here is lacking. They do swivel but they feel a bit cheap. I don't know; there's just something about them. Maybe it's that the plastic feels to soft and they tend to look bent. One of mine looks like it would constantly be shooting Night Stalker in the head, which is definitely not an effective offensive technique. 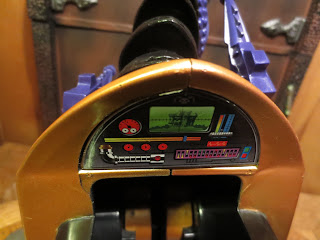 * I like the details on the view screen, but I really wish we had received some sculpted controls and details instead of this sticker. It's just a bit plain and kind of tacky for a figure like this. 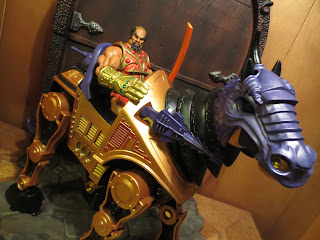 I really like Night Stalker. While we're definitely reaching the end of characters I can name offhand that I'm interested in seeing in Masters of the Universe Classics, I've been wanting the robotic horse for quite some time. While we can almost rest assured that Super7 will deliver a Stridor at some point (he'd literally just need to be a repaint), having Night Stalker in hand is still a pretty good experience. The articulation is well thought out, the paint and sculpt is as good as any other vehicles in the line, and the new armored helmet is a neat extra. Night Stalker is a Great and a 1/2 figure and a worthy addition to the MOTUC shelves.

If you're looking for more Masters of the Universe Classics reviews, check out the following: