31 Days of Toy Terror Lives: Mad Scientist from Monster in My Pocket by Matchbox 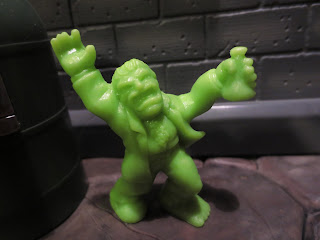 Today I'm looking at another Monster in My Pocket figure from Matchbox: The Mad Scientist! Look carefully (or dig up the character's old bio) and you'll learn that this isn't just any old mad scientist: It's actually Dr. Jekyll turning into Mr. Hyde! The Mad Scientist was part of series 1 and was worth 10 points in the little game that was tied in with the figures (does anyone remember how you played it?). He's a simple minifigure but a fun one. While I had the trading card set back in the day, I somehow only ever owned one pack of the figures (a four pack). What a shame! Fortunately, every now and then I snag a few more to add to my slowly growing collection. I picked this guy up in a small lot over the summer and now my gain is your gain too! Add to the spookiness of the Halloween season with this cool review of the Mad Scientist... 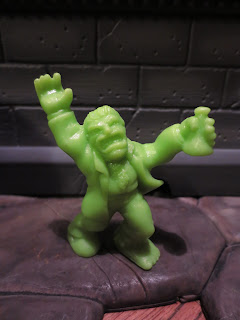 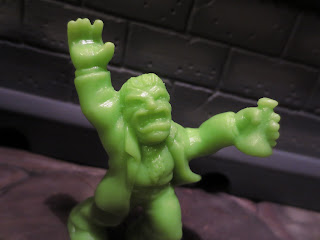 * This guy just works. Honestly, he's probably one of my favorite MIMP figures: He has a great pose, an easily recognizable monster archetype, and an expressive face. Dr. Jekyll's face is contorted in a terrifying grimace while his arms are reaching out to the heavens. He's also holding an erlenmeyer flask filled with the potion that turns the mild mannered Dr. Jekyll into the ruthless, reckless, Mr. Hyde. 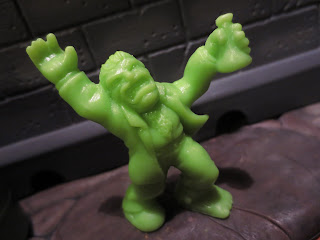 *Besides just the grimacing face, if you look at Dr. Jekyll's body you can see the hair sprouting from his chest, one show missing as his left foot has already taken on a beast-like form, and some shredding on the bottom of his pants. He also smells vaguely like green apples, although that's probably just an aftereffect of the now 25+ year old plastic. 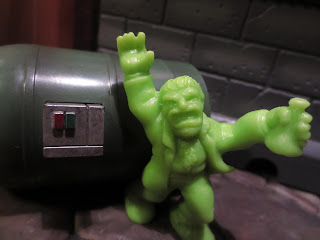 This guy is awesome. I really dig him and he just perfectly epitomizes the beauty of Monster in My Pocket for me! He's fun and is just a neat little guy to have around. You know, with rising costs on traditional action figures I'd love to see a line like Monster in My Pocket make a resurgence. I loved S.L.U.G. Zombies and had high hopes it would last much longer than it did (sadly it just kind of faded away) but hopefully someone else will bring us the joys of a pocketful of little monsters. But not Pokemon. I Like Pokemon, but they're not quite the monsters I had in mind.

Keep checking back here every day in October for more Toy Terror! Also, make sure to check out the Toy Bloggers United contest being hosted here this month! For more 31 Days of Toy Terror, check out my Hokey Halloween Horror page for spooky fun from 2016 and years past!
Posted by Barbecue17 at 10/14/2016