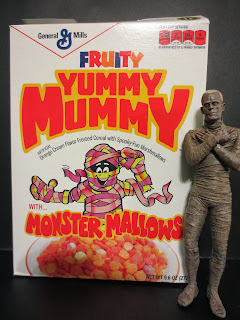 This review is from 2013. And we still haven't seen a rerelease of this cereal yet. That makes me sad.

So, Fruity Yummy Mummy was apparently released in 1987 and discontinued in 1993. I don't remember it at all. What bothers me here is that I could have spent an additional 6 years of my life consuming Fruity Yummy Mummy, which I'm going to come out and declare as my favorite breakfast cereal of all time. Ever. Period. It's an orange cream flavored cereal (one of my favorite flavor combinations) and after just one bite I was hooked. I have never, ever, ever tasted a cereal as robust and vivid as Fruity Yummy Mummy. Seriously, if General Mills will agree to put this out year round from now on, I will happily offer to dress up as the Fruity Yummy Mummy and serve as the mascot for any commercials they might want to put out. This cereal is righteous. More details, gushing, and marshmallows after the break.... 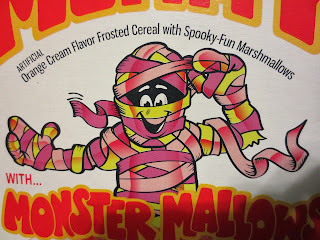 I love the cereal, I love the flavor and the colors, but I'm not 100% sold on the Fruity Yummy Mummy himself. Don't get me wrong, I don't wish him any ill will but he just needs a little extra something to distinguish him from a generic character appearing on a greeting card. You're a breakfast cereal mascot for the love of Karloff, dress the part! Maybe a pharaoh's headdress with a cereal spoon on the top or something. 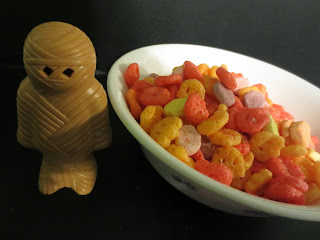 Here's the cereal. I'm actually planning my next trip to Target right now to buy more of this stuff. The package says it's "Better if used by July 2014" so I'm thinking I can stock up on this stuff through July, survive a few staler bowls in early August, and have new cereal when this cereal gets inevitable rereleased next year. The flavor is amazing. If you've ever enjoyed a Dreamsicle, Imagine that in your cereal bowl. Yup, easily the most confirmed Epic cereal I've ever eaten. You did good, General Mills. You did real good.
Posted by Barbecue17 at 10/17/2016