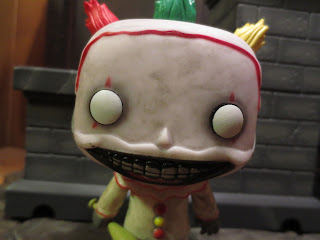 I've really enjoyed American Horror Story. Just last month I finally was able to watch the fourth season of the horror anthology TV show which takes place in the early 1950s and centers around one of the last freak shows in existence. During the early episodes of the season part of the plot revolved around a murderous clown named Twisty. Played by John Carroll Lynch, Twisty manages to elicit both terror and pity from viewers. I really like season four and Twisty is one of the highlights. I picked this guy up to review as part of 31 Days of Toy Terror Lives and I think he is without a dobut one of the scariest toys I've ever seen. Read more after the break, if you dare! 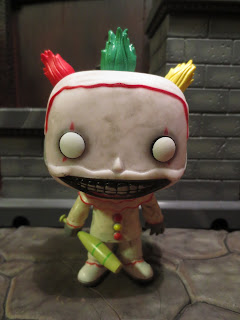 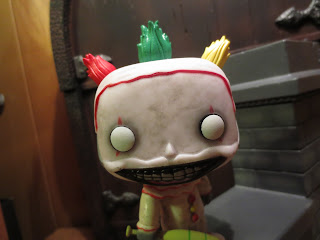 * Oh my gosh. Twisty is not just the scariest POP! I've ever seen but possibly one of the scariest toys I've ever seen. Twisty was pretty freaky on the show but this figure is absolutely nightmare fuel. It's the eyes. Usually Pop! figures have those cute little black eyes but Twisty has large white eyes. Large, milky white, soulless eyes. Yikes! This figure honestly and truly creeps me out. I'm glad I bought him! 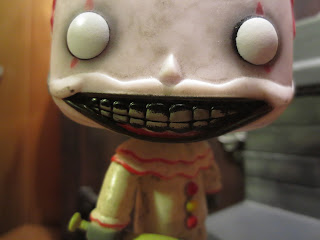 * Here's a close up look at Twisty's hideous mask. Yeah, the teeth and mouth are actually a mask he wears to cover up something even more disturbing. Just watch the show already, will ya? 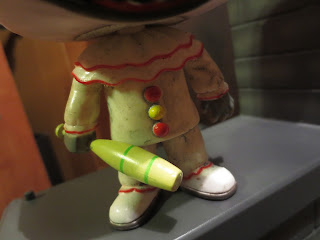 * Twisty's clown costume is nicely rendered here in the simple Pop! style. He's also carrying a juggling pin. What's he going to use it for? You don't want to know. Believe me. 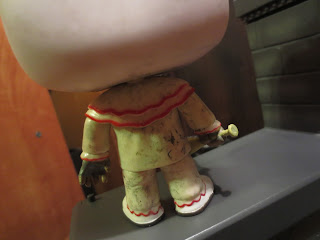 * Perhaps the thing that helps Twisty stand out from other POP! figures from Funko is that he actually looks really dirty and grimy. If Todd McFarlane wee to handle the paintwork on a Pop! figure, this is kind of how you'd expect it to turn out. Usually Funko uses a very clean paint design on the line but Twisty's grime and filth really help him to stand out. This is awesome work on Funko's part. 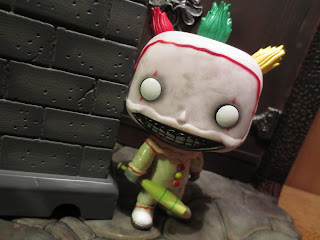 I have to admit that this figure really and truly creeps me out. Because of that, I'm pretty sure Funko did an awesome job at crafting this guy to capture the terrifying character from the excellent fourth season of American Horror Story. I'm not sure I ever imagined a Pop! could be this creepy, but Twisty definitely is. He's getting an Epic rating from me for sure, because I'd be afraid to not give the guy an Epic rating.


Keep checking back here every day in October for more Toy Terror! Also, make sure to check out the Toy Bloggers United contest being hosted here this month! For more 31 Days of Toy Terror, check out my Hokey Halloween Horror page for spooky fun from 2016 and years past!
Posted by Barbecue17 at 10/12/2016