31 Days of Toy Terror Lives: Skeleton from Monster in My Pocket by Matchbox 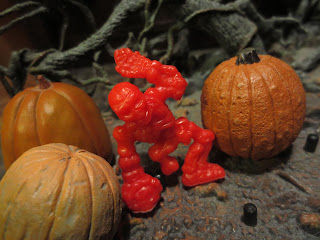 Today on 31 Days of Toy Terror Lives I'm looking at one of the most basic monsters there is: A plain old Skeleton! Seriously, does it get any simpler than this? He's just a pile of bones? The Skeleton may very well be an army builder in the Monster in My Pocket universe. He's fairly nondescript and has a low point value (only 5 points- these guys all had different values attached to them as part of a game) meaning he's basically cannon fodder. If the good guys come looking for the Phantom of the Opera or the Beast, they're probably going to plow their way through plenty of skeletons first. I had the chance to pick up the Skeleton in a few different colors but I opted for red. It just seemed to fit the idea that these are some old, bloody bones. Ready for a closer look at the Skeleton? Then join me after the break... 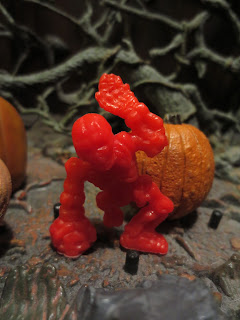 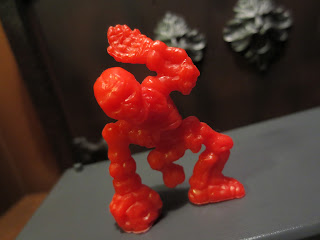 * I'm kind of conflicted on the Skeleton. While I appreciate the fact that he's doing something unique (missing a leg and balancing himself) I dislike that such an abnormal pose keeps him from being useful in a skeleton army. Having one or two skeletons acting bizarre and slightly wounded is one thing, but a whole army? That stretches believability! 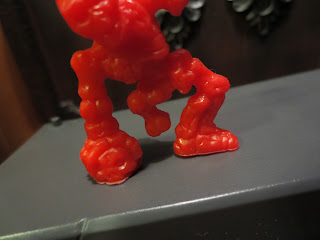 * If you look more closely you can see that there is a nice amount of detail on the skeleton's bones. Matchbox used a slightly rubbery plastic on these figures (they're definitely much more rubbery than G.U.T.S. or M.U.S.C.L.E.) so the detail typically looks a bit soft, but it's there. The Skeleton is also using a skull to help balance himself. That's a gruesome little detail and it sounds like something a Dungeon Master might come up with to keep the players on their toes. 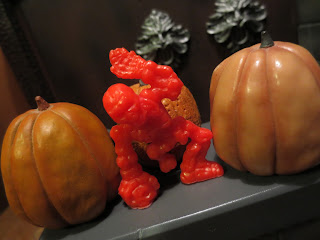 I definitely never want to pass up a good skeleton minfigure but I almost Matchbox had went with something a bit more generic here. I could totally see wanting to army build these skeletons if they were in a more standard, neutral pose. As it is, though, this guy is more of a one off anomaly. He's a curiosity, if you will, and perhaps rather than being one of the nameless, faceless legions of the undead he is some famed local specter out for revenge. This guy gets a Good and a 1/2 rating from me.


Keep checking back here every day in October for more Toy Terror! Also, make sure to check out the Toy Bloggers United contest being hosted here this month! For more 31 Days of Toy Terror, check out my Hokey Halloween Horror page for spooky fun from 2016 and years past!
Posted by Barbecue17 at 10/17/2016