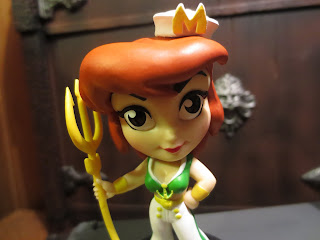 Today I'm looking at the Lil Bombshells version of one of the most powerful and underappreciated DC characters: Mera. I'm really excited that Mera is going to be appearing in Justice League (played by Amber Heard) because I like the character and feel like she just doesn't get the recognition she deserves. I love the Bombshells statue of Mera (it's one of my favorites, actually) but I also appreciate that Cryptozoic did something different with this version of Mera. Rather than a pinup beauty at the beach, Mera is now wearing sailor's garb and carrying a trident. Pretty cool, right? Let's take a brief look at this neat minifigure after the break... 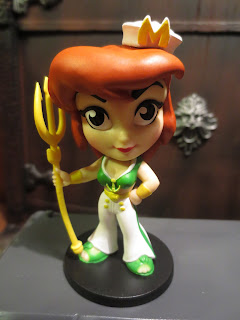 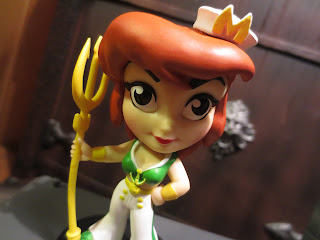 * I love Mera and I love how Cryptozoic depicted her here. Her face is quite lovely and expressive. I'm still impressed by how clean the paint applications are on these tiny 3-inch tall figures. I'm also digging the fact that she's wielding a trident. It works for her and nicely pays homage to her comic roots. 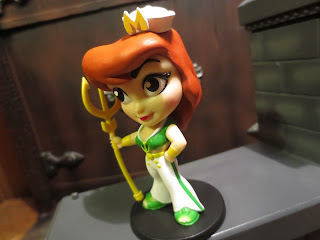 * As I mentioned in the intro, Cryptozic seems to have given Mera a really different outfit from the Bobmshells statue she's based on. Rather than the bathing suit and giant sun hat, this version of Mera is wearing a green and white sailor's suit. I love the different look, although not as much as I like the original concept art. 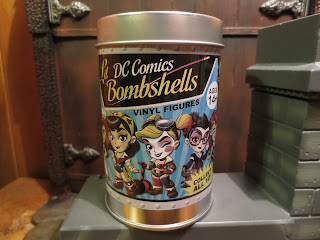 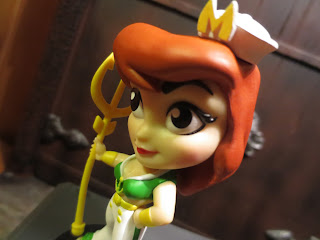 While she's in a different outfit, I really like Mera. She's bright, colorful, and looks fantastic! She's definitely not one of the top tier figures in this series but I'd definitely put her in the second tier. She's a Great minifigure and makes a great addition to the series. I like the diverse number of looks in this line and I'm interested to see what figure get added to a series 2. Personally, I'd like to see Batgirl, Supergirl, Cheetah, Killer Frost, Zatanna, Lois Lane, Bumblebee, and Raven in this series.


I haven't reviewed any other figures of Mera yet, although I'm always hoping that Kotobukiya will announce her in their Bishoujo series. She's one of my most wanted characters in that line!
Posted by Barbecue17 at 10/18/2016