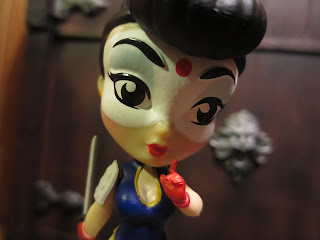 2016 has been a pretty good year for Katana. Not only did she appear in Suicide Squad (played by Karen Fukuhara) but she's also been featured in the very popular DC Comics Superheroes property. Seriously, you can go to McDonald's right now and get a Katana toy in your Happy Meal. That's a pretty huge step for a character who has been around since 1983 with little mainstream exposure up to now. Katana is also getting what looks to be an amazing DC Bombshells statue later this year. It's interesting that Cryptozoic put her in the Lil Bombshells line already and it makes her, along with Flash, one of the only two figures in the series based on as yet unreleased statues. That's kind of cool, really. Let's take a closer look at Katana after the break... 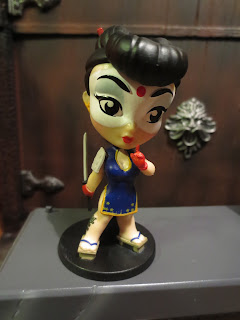 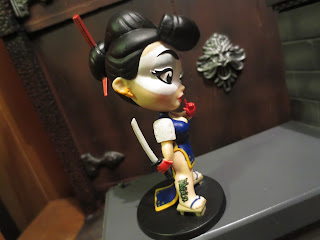 * Visually Katana is one of the most interesting figures in the line. Her dress is extremely colorful, her hair is held up in a bun with hairsticks, she's wielding a sword, and she has a sweet dragon tattoo on her right leg. Katana has some excellent paint applications that help bring out all of these details. For a 3-inch tall figure, she's pretty nicely painted. 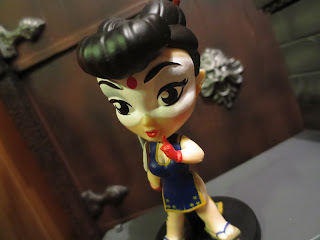 * I love how Katana's mask has been translated on this figure. The paint work is excellent and really makes this a very lively looking piece. I'm also digging the whispering finger gesture Tatsu's giving. It's just a cool little extra that gives a lot of personality to the figure. 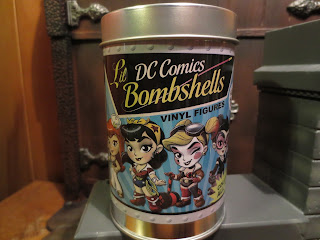 *   I don't usually talk much about price when it comes to toys. I do want to mention here, though, that these seem to be around $10 which seems a couple of dollars too high, especially for a blind-bagged series. Well, blind canned. Yeah, these actually come in little tins with removable lids. It's a cool gimmick although I imagine it's what is adding the extra few bucks to the line. The tin is quite nice, though, and looks good on display with the figure. There's even a checklist on the back. 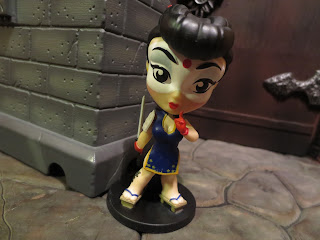 Katana is really pretty awesome. I'd honestly put her pretty close with Hawkgirl and Batwoman as one of the best figures in this series. She has a very vivid paintjob and some excellent visual cues that make this interpretation instantly recognizable as Katana. She's a Great minifigure and a definite recommend for fans of the line. These minifigures are frustrating to collect due to they are truly blind bagged (unless you open the lid) and they're a bit pricey, but they're well done.


The only Katana figure I've reviewed so far is from the New 52 Wonder Woman versus Katana two pack by DC Collectibles. I'm still looking for the Suicide Squad version as of this writing! If you have one, help me out please!
Posted by Barbecue17 at 10/20/2016