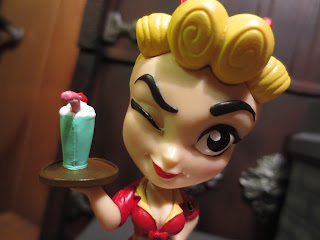 Today's minifigure review is another figure in the incredible Lil Bombshells series by Cryptozoic: The Flash! Yes, the Flash is now in Bombshells. It's not Barry Allen or Wally West. Or Jay Garrick, either. It's actually Jesse Chambers, AKA Jesse Quick. I think it's a pretty cool concept to have Jesse Quick take up the mantle of the Flash in a project like this. I've only finished the second volume of the actual Bombshells comic series and, so far, Jesse hasn't shown up. DC seems to really have big plans for the Bombshells, though, so I imagine we'll see her eventually. Let's take a closer look at this minifigure after the break... 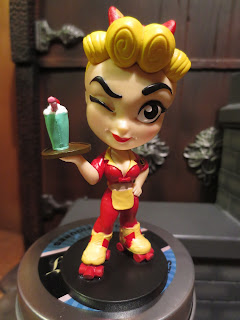 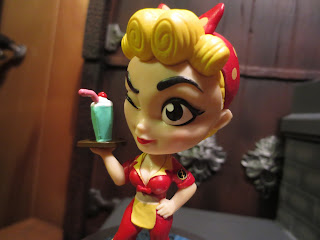 * So how is the Flash/ Jesse Quick depicted as a Bombshell in the alternate universe World War 2 era? As a carhop! She has an awesome hairstyle, a flash red uniform, and a little lightning bolt symbol on her shoulder. She's also carrying a tray with a tasty looking milkshake, complete with a cherry on top. 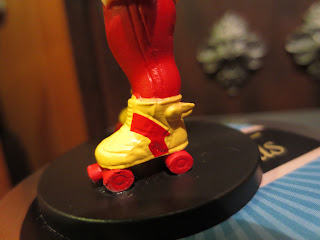 * I'm absolutely digging Jesse's roller skates. Not only do they have a cool paintjob but they're also sporting little wings, just like on the Flash's helmet. Seriously, turning the Flash into a carhop was just a really funny and clever idea. 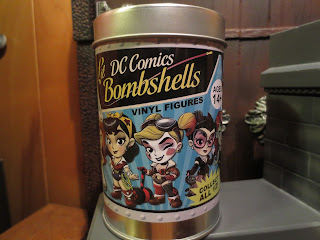 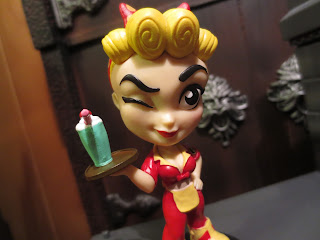 Sporting a killer design and sculpt, beautiful paintwork, and a tasty looking milkshake, the Flash is another incredible figure in this series. I really love these ladies and I feel that Jesse is another Great entry. While there seems to be a series 1.5 coming out with a couple simple repaints, I'm really waiting for a true series 2 to get some new sculpts and some new significant characters (I'm amazed that Supergirl and Stargirl aren't in here yet; they have huge roles in the comic!). These minis look awesome as a set and I'm glad to add Flash to the group. Only one more to go!

I think the only other toy of the Flash I've reviewed is the Barry Allen Lego minifigure from the Lego set The Riddler Chase. I have reviewed a couple of other Lil Bombshells so far, too, including: