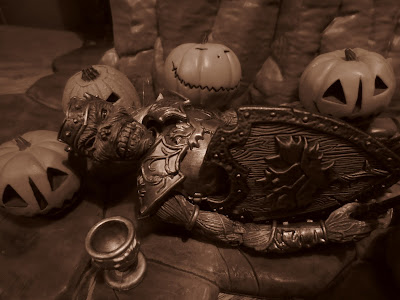 Today on "31 Days of Toy Terror Lives" we'll be visiting the haunted lands east of the shire known as the Barrow-Downs or Tyrn Gorthad, haunted by the Draugr-like creatures known as the Barrow-wights. Hailing from one of the creepiest segments of The Lord of the Rings, the barrow-wights are evil spirits that have reawakened ancient bones resting in the cairns and harass the Hobbits as the make their way towards Bree. This figure was released in September of 2000 as part of the last series of figures from Middle-Earth Toys and is inspired by the books by J.R.R. Tolkien (and not the Peter Jackson films). There were a few variants of this figure and this version, the Nocturnal Barrow-wight, was a Diamond Comics exclusive. This was a really cool line of action figures that sadly didn't last very long (only nine separate releases, not including variants) and I'd love to see another company take a stab at the property. These was a lot of thought put into each release and you can tell there was a lot of love, too. It's very cool to see that the packaging for these included not only quotes from the books but also credits for the creators of the toys. I love Toy Biz's movie based The Lord of the Rings line but it's pretty cool to have a unique take on characters from the books, too. Let's delve into some spookiness with the Nocturnal Barrow-Wight, shall we? More horror after the break... 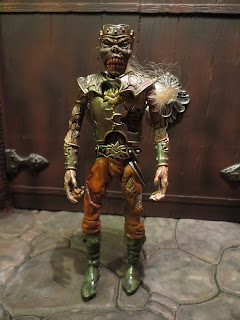 Accessories: Shield, dagger, and a goblet. 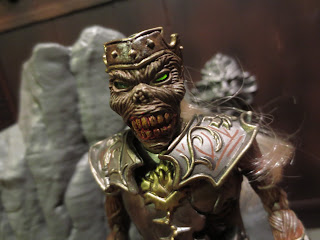 * This is an incredible headsculpt! Look how hideous this thing is! The teeth and translucent green eyes are incredible (they glow through the use of light-piping)! If you've ever played The Elder Scrolls V: Skyrim, you'll notice that the Draugr in the game bear a great resemblance to the barrow-wights. That's because Tolkien, Skyrim, and Toy Vault all were inspired by Norse mythology for these creatures. 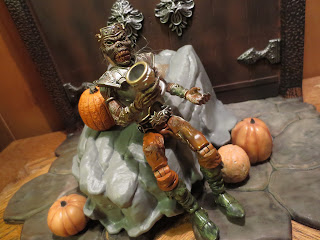 * While the articulation is rather antiquated compared to most modern lines, at the time these were far more poseable than most of what you could find on store shelves. While there are no ball-joints or swivel/hinge joints present, these presence of hinged knees and elbows should let you do a few cool things with this creepy corpse. 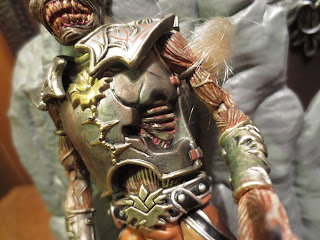 * Not only is the barrow-wights armor amazing with some skillful dry-brushing to represent rust but there are even some places where the armor has broken away to show off the body's rib cage. Hmm... maybe this is the blow that killed the original warrior who inhabited this body? 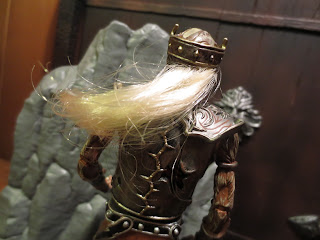 * The body now inhabited by the barrow-wight also has another pierced segment of armor on his back right. Maybe this guy got into a really tight spot! What's really worth noting here is the realistic hair. It's really odd looking at first but I think it works here. It's a pale, blondish color (befitting of Nordic inspiration) and it flows down over the wight's shoulders. 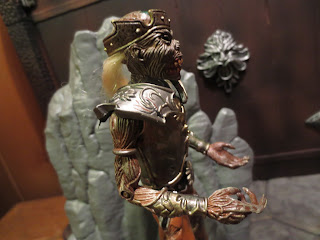 * Check out the sculpting and paint on the skin! It has that creepy, dried out look that you'd expect from some bizarre form of natural mummification. There are also a few different paint highlights on the skin that just bring out all of the creepy details. 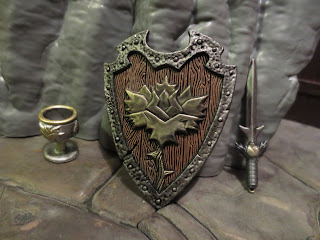 * Each of the three accessories included here is absolutely insane in terms of detail and paint. These are amazing, particularly the shield. I love the crest on it (it matches the belt buckle) and the dry brushing and work on the wood is amazing. This is some real quality stuff right here. 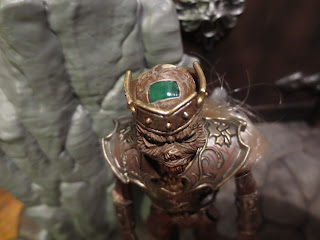 * On the top of the barrow-wights head is a translucent green panel which is used to help his eerie green eyes glow. I like the concept but I'm never that big of a fan of the translucent panels needed to make light-piping work. The idea is that if light shines down through the top of the figure's head it will light up a part lower on the body. It can look cool but it also is an unsightly element on an otherwise amazing sculpt. 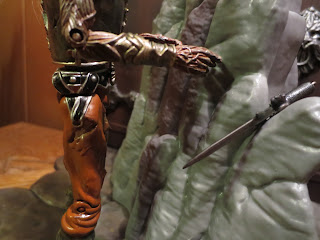 * A sheathe would have been a nice inclusion. Heck, even a loop on the hip to slide the dagger into would have been welcome, too. Since the barrow-wight has a goblet, it'd have been cool to let him have a place to store his blade when he's quaffing his favorite ancient beverage. 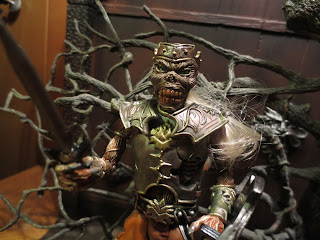 The late 1990s and early 2000s were a pretty amazing time to be a toy collector as no property seemed unattainable (or unable to sustain a toyline) and nearly every figure had a unique sculpt. While today's figures do look...more accurate and proportioned might be the best way to put it, so many of the toylines from the late 90s and early 00s just had so much attention to paint and detail that they're still amazing to examine and explore. With today's toys having much more of a focus on interchangeable parts, we don't see that level of detail as much anymore. Considering that I'm still gushing about this toy today, 16 years later, I think that at the time it would have easily warranted a Great and a 1/2 rating. It might not be the most well articulated toy but that creepy face and amazing shield just continues to impress me. Check out this figure if you get the chance and, if you've never read Lord of the Rings, give the series a try. There's some excellent stuff in the pages of Tolkien's masterpiece that never made it into the films (such as the scenes with the barrow-wights) including some of the most horror-related scenes. Definitely not a bad choice for an October read! 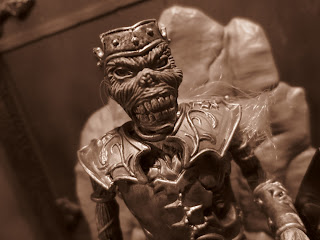 I've also reviewed The Shadow Balrog
from Middle-Earth Toys, so check that review out too!