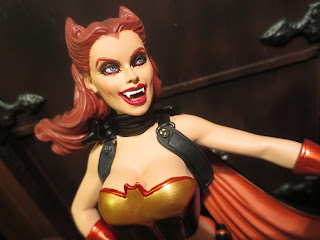 Happy Halloween! Today as part of the final day of 31 Days of Toy Terror for Halloween 2016 I've got something really special for you: Halloween Batgirl from DC Collectibles' DC Bombshells. I love the Bombshells property; I've collected the Lil Bombshells, read the comics, and I reviewed the Batgirl Bombshells statue back when it was released in 2014. I have to admit that I didn't think very highly of it that piece. I've started collecting some of my favorites of the Bombshells statues and still I just don't like that Batgirl very much. Fortunately, DC Collectibles has kind of given Babs a second chance in the form of this new, updated Halloweem Batgirl statue. Not only has Batgirl been given a new orange and black paint scheme but she's received a new backpack and a new headsculpt that captures the look of a piece of vintage Halloween pinup art quite nicely. Mix together Halloween and Batgirl and you probably new I'd be picking this up, eh? If she had a pumpkin standing on her base, I'm not sure this could have been any better. Ever since this piece was announced I knew it would be the crowning jewel of this Halloween 2016 countdown. Let's take a closer look at her after the break... 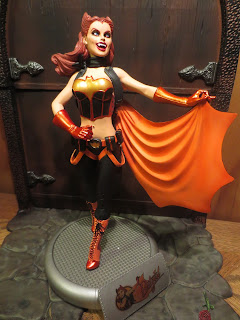 Height: 11 inches with base 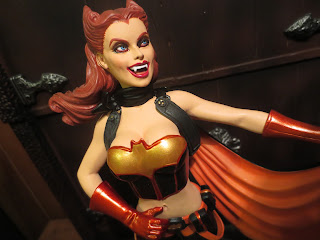 * There's going to be some comparisons between this statue and the original since this is a reworking of that piece. The original statue was credited to Tim Miller while this one is credited to Miller and Karen Palinko, who I'm assuming handled the new elements. She did an excellent job here as the changes make this feel like a completely new piece. The position of the head here is so much better than on the earlier statue. It just looks better, especially with those striking oranges and blacks. 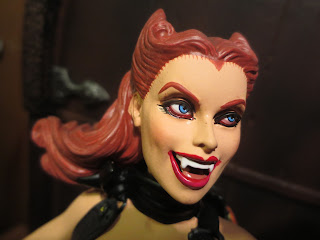 * Oh my gosh do I love this headsculpt! My least favorite element of the original Bombshells Batgirl statue was the headsculpt. I just really disliked how strange it looked, especially compared to how beautiful every other statue in this series is. This is absolutely amazing, though. I love the hair style, the hair color, and the vampire fangs. This is just gorgeous and really captures the look of vintage Halloween themed pin-up art. The paint on the eyes is incredible and really brings the piece to life. 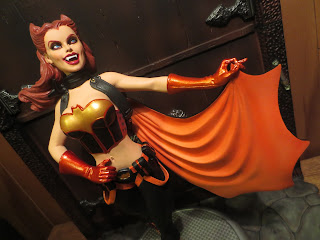 * The pose isn't any different than the previous statue (well, other than the angle of the head) but the way vampire Batgirl is holding out her cape just works so much better on this statue than it did with the oriignal. I have no idea what the original statue was going for, but here it definitely seems like a very seductive and haunting motion. There's something very classically Dracula about it and it works better here than on the original. Plus, the orange cape? Just pure win. 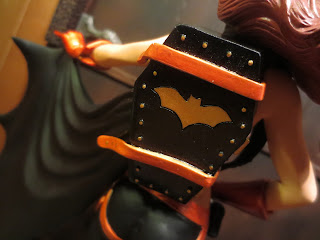 * The previous figure portrayed Batgirl as an aviatrix, so it made sense for her to be wearing a parachute pack which kind of functioned as an anchoring point for her cape. Rather than a parachute pack, this version actually has a miniature coffin on her back which the cape is flowing out of. I don't care if it makes sense or not, but I love this design. It's just so cool and really helps to solidify this as a genuine Halloween themed variant piece rather than just a simple repaint. 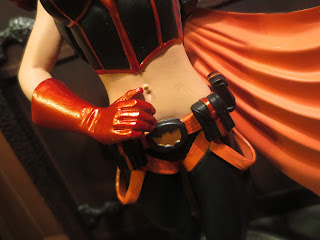 * The sculpt of Batgirl's waist isn't any different than the standard statue but the colors just jump out more, particularly the metallic orange gloves and ribbing on her corset. Again, the orange and black color scheme just really helps to make this statue so much more appealing than the standard version! 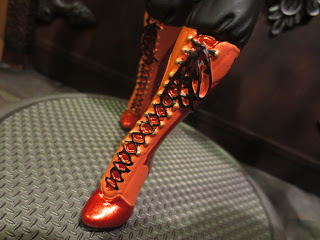 * The boots are nicely painted with the same great color scheme: Flat orange with metallic orange highlights and black laces. They look great and everything is really neat and clean. 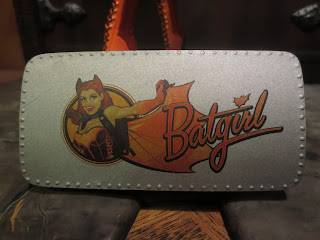 * Halloween Batgirl has the same "metal panel" nameplate design as every other figure in the series, but I like that consistency. The stylized Batgirl name and the little image of Ant Lucia's artwork looks perfect. 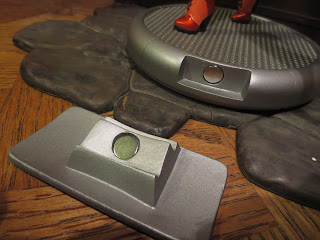 * Something I really like that's just a good design feature is that the nameplate is easily removable via a magnet. This helps to make this element much less likely to be damaged in shipping. Of the three other bombshells statues I own (the standard Batgirl, Zatanna, and Mera) only Mera has this feature, so it had to have been added in 2015. Again, it seems like more of a safety feature for better quality control, but I like it. 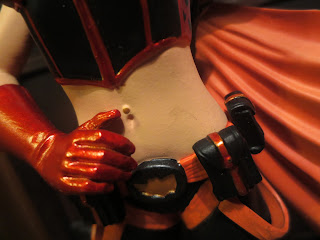 * It's really tough to see in this picture, but there seems to be some odd issues with the paint on Batgirl's stomach. There are some random darker spots, perhaps where the paint didn't dry properly or where something didn't mix quite right. It's not the worst thing in the world, but it's definitely there. 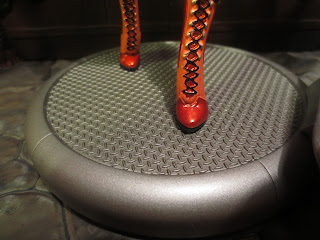 * Considering that so many of the other statues have started including design elements on their bases, I really think a pumpkin or two would have absolutely improved the overall presence of the statue when on display. 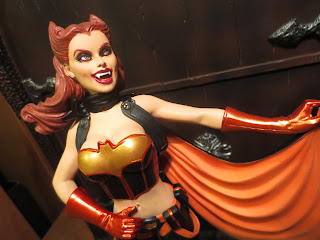 Wow! I'm amazed by how much better this Halloween variant is compared to the original. I believe I rated that one an Eh and 1/2, but this one? A Great and a 1/2. There's some minor paint improvements that could have been made, but overall this is just such a cool statue. I love the portrait, the paint color choices, and the pose. It's just amazing how much better it works here than on the original piece! This is a perfect way to wrap up 31 Days of Toy Terror and to keep the Halloween Spirit on display all year round! Happy Halloween! 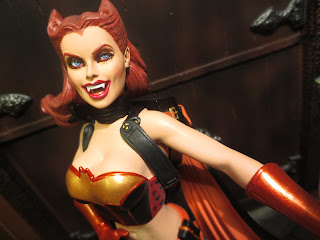 Hopefully this doesn't end the review on too big of a bummer, but I did want to make a bit of an announcement regarding my Batgirl collecting. There are a few readers here who also collect Batgirl stuff and I've enjoyed connecting with you. When I started collecting Batgirl stuff back in 2007, items featuring Barbara Gordon were far and few between and I could fairly easily pick up nearly everything. Fortunately for the character, things have changed and she has become more popular than ever. There is so much Batgirl stuff being released now, though, that there's no way I can keep up with it all while still collecting anything else. Heck, Prime 1 Studios has a Batgirl statue coming out next year that's nearly $1000 dollars. Mattel is also licensing the heck out of the DC Superhero Girls line and Batgirl is on pretty much everything imaginable. That's why I'm making the call to limit my Batgirl collecting to stuff that really impresses me or that presents something really unique (this Halloween Vampire Batgirl totally counts). If you notice that I'm posting fewer Batgirl reviews, it isn't that I'm any less a fan of the character; it's more that I've just reached a point where I'm having to be more selective. As you can tell, my primary love is action figures and to collect everything Batgirl right now, I'd have to cut back on those. If you're ever interested in reviewing some new Batgirl product you've picked up, let me know! I'd still like to keep growing the Virtual Batgirl Museum on here even if it becomes a community effort rather than just being my personal collection!


Keep checking back here next week for some Re-Halloween craziness! Also, make sure to check out the Toy Bloggers United contest being hosted here this month! For more 31 Days of Toy Terror, check out my Hokey Halloween Horror page for spooky fun from 2016 and years past!
Posted by Barbecue17 at 10/31/2016