Road to Rogue One: Grand Moff Tarkin #159 from Pop! Star Wars by Funko 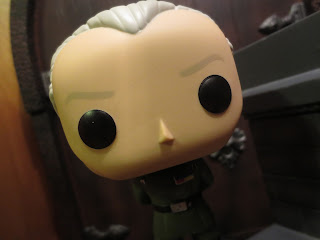 Today I'm looking at the second exclusive Pop! figure from the September 2016 Smuggler's Bounty crate and it's Grand Moff Tarkin. Tarkin has long been one of my favorite Star Wars characters and manages to still be one of the most sinister villains in the saga. That's really saying something. All credit goes to master thespian Sir Peter Cushing who crafted one of the most genuinely evil characters to ever appear on a film screen. I mean, Tarkin is the kind of guy who doesn't flinch when it comes to blowing up an entire planet. Pure evil right there. When Funko announced that this crate's theme was going to be the Death Star, I kept hoping that Tarkin would be one of the included Pop! vinyls. I was right! Let's take a closer look at Grand Moff Wilhuff Tarkin after the break... 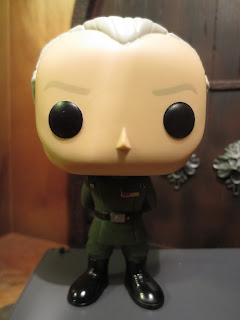 Non-Scalper Price: $25 as part of a set which also includes a Darth Vader Pop!, a t-shirt, a Death Star luggage tag, a Stormtrooper pin, and a Darth Vader patch. 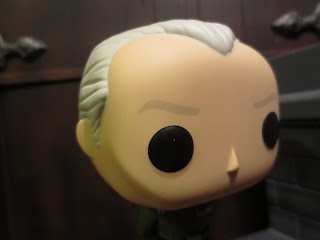 * Sir Peter Cushing absolutely had one of the most distinctive faces and yet, depending on how he portrayed himself in a role, he could appear both utterly terrifying or extremely cultured and charming. Tarkin is one of his terrifying roles and Cushing just oozed evil in every frame of A New Hope. While a Pop! doesn't usually capture an actor's likeness, the widows peak, pointy nose, and slightly sunk in cheeks really do a great job of capturing the visage of Tarkin. 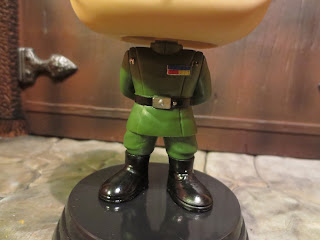 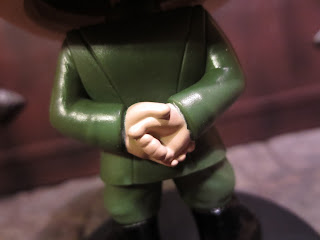 * Turn the figure around and you can see Tarkin's hands resting behind his back. This just seems like a really cool and unique detail to me. 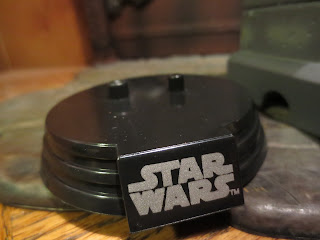 * All of the Star Wars Pop! figures come with a nice display stand. The figures fit on them rather easily and they give the line an appealing, uniform look. They also keep them from tipping over, something I really appreciate. 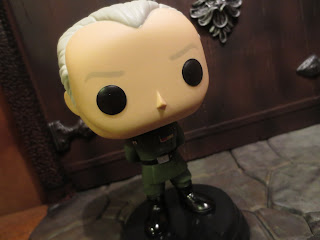 As I mentioned, Tarkin isn't one of the most creative Pop! figures but if you're a fan of the character you should be pretty satisfied. I like how Funko deviated from the norm a bit and gave Tarkin some unique features to help him have a more Cushing-like appearance. He's a pretty cool exclusive of a great character. A Great Pop! and another fun addition to the collection of Pop! vinyls that my wife, daughter, and I seem to be amassing.

I haven't reviewed any other toys of Grand Moff Tarkin on Action Figure Barbecue, but I have reviewed a few other Star Wars Pop! figures, including: