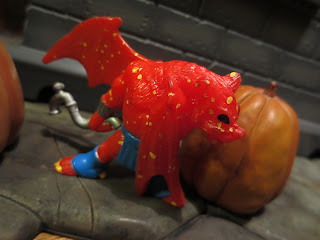 Parts are absolutely a staple of Halloween decorations and tradition so today I'm looking at a bat of some sort: The Sewerbat from Trash Bag Bunch! He's a muscular, red and yellow bat armed with a faucet and pipe combination. Pretty slick right? Well, to be honest, this guy is kind of a mixed bag. He honestly doesn't even look like he belongs in this series of figures. Catch more discussion about Sewerbat than you ever thought was possible after the break... 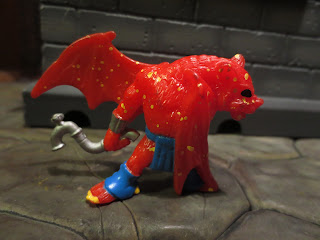 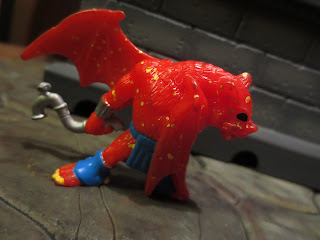 * So...Sewerbat. The first question I had when really looking at this guy is "What exactly is he supposed to be doing?" He's standing in a sideways stance with his head looking to the left. What's going on with the wings, though? He seems to be holding his left wing over the front of his body, kind of like what Batman or Dracula often do with their capes. Due to the bright plastic used it's really difficult to pick out the details, though, and this looks kind of unusual. 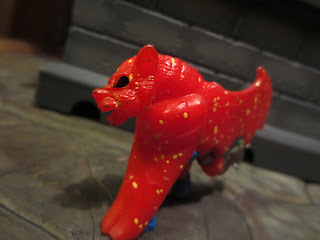 * Here's a look from the back. The headsculpt is terrific but, again, the brightly colored plastic he's molded in just doesn't show a lot of detail. This guy seriously needed some darker paint like black or grey on his wings to help differentiate things. I like the yellow spots but they don't really bring out detail. 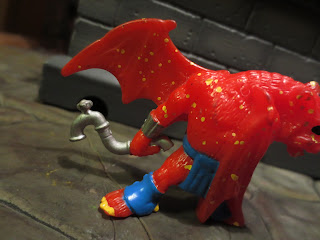 * The coolest thing about the figure is the pipe he's carrying as a weapon. It's an old faucet and it definitely looks like something this guy found lying around in the sewers. I'm digging it and it seems like a pretty effective weapon. 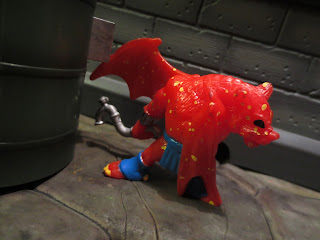 There's a lot of cool detail on this figure but it's all hidden by the bright red plastic he's molded in. It all kind of mixes together and you can't make out what's going on with the sculpt. It's sad, really: I would have loved to have seen this guy with some different colors. In the end this guy gets an Eh and a 1/2 from me. He had potential but he just didn't live up to it.

Keep checking back here every day in October for more Toy Terror! Also, make sure to check out the Toy Bloggers United contest being hosted here this month! For more 31 Days of Toy Terror, check out my Hokey Halloween Horror page for spooky fun from 2016 and years past!
Posted by Barbecue17 at 10/26/2016