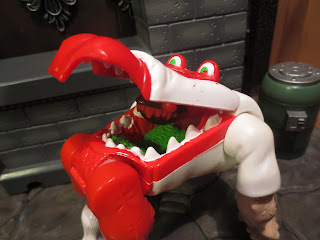 While I haven't seen the 2016 film yet (a mixture of not getting a chance to go to the theater and not finding anyone to go with when I could go, so I'm waiting for the Blu-Ray), I have successfully introduced my little one to the original films and the Real Ghostbusters cartoons series this year, so that's already a win in my book. My little one is nuts about the Ghostbusters and we've been having fun playing with this group of figures I picked up in a small lot on Ebay. Today I'm looking at one of the 1988 Haunted Humans figures: Tombstone Tackle! Tombstone Tackle looks like a big, burly football player (an Ohio State player, according to people more aware of football than I am) but turns into a four legged creature with a giant mouth. The ghosts in the Real Ghostbusters cartoon rarely could just be qualified as ghosts and this monstrous mega mouthed monstrosity feels like something that could have shown up on the show. Let's take a look at Tombstone Tackle after the break... 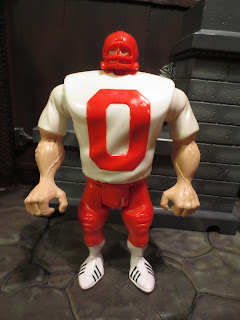 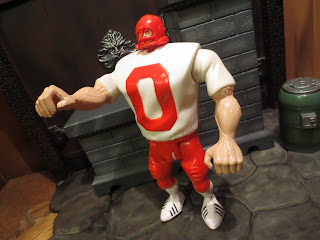 
* Not only is Tombstone Tackle rather large and intimidating looking but he has articulated arms and legs. You can actually play with this guy like a normal action figure and, even years later, this guy feels quite sturdy. 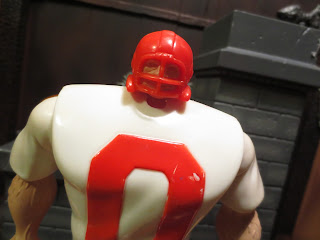 * Here's Tombstone Tackle. He's number #0 and is just a massive, beefy guy. If you look closely at the face behind his facemask, you can see that he doesn't look like a friendly dude. His crazy build seems more like a Masters of the Universe figure than your average Ghostbusters figure. 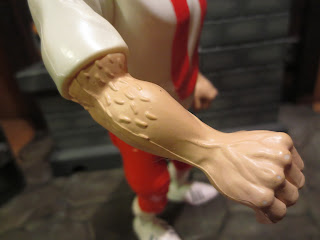 * There are a few cool details on this guy such as his thick arm hair, veiny forearms and hands, and striped socks. It's a simple sculpt but it works well for the era this toy was released in. 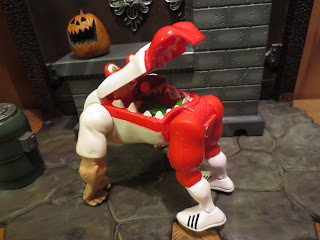 * Here is Tombstone Tackle transformed! This guy is really quite strange as it requires bending the football player over and pressing down on his head, opening up the back. This has always been one of the strangest figures in this series. He almost seems like something out of Hellraiser, particularly due to the fact that the mouth seems to open around his anus. Plus, the little football shaped dude inside? Let's just say that H.R. Geiger would probably have a field day with that. 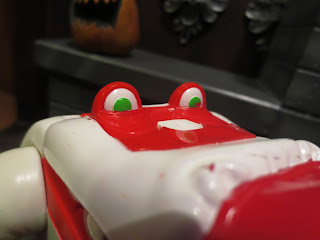 * I like these flip up eyes. They're simple but they're kind of odd. You can almost imagine watching a cartoon episode where a giant football player has these eyes pop out of his back right before someone attempts to tackle him. Of course, this would lead to the giant mouth opening up and swallowing the other player. 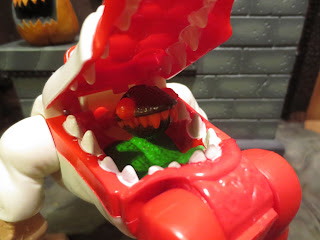 * Here's the odd little guy inside Tombstone Tackle's mouth! The little football like creature can move up and down when you tilt the human body's head. It's not the tongue, though, as that's the bumpy, neon green slap of nastiness resting as the bottom of the giant mouth. 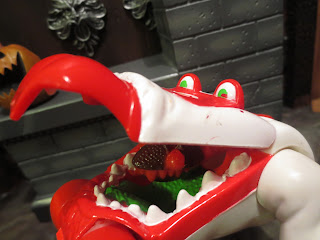 Having never been a sport fan, as a kid Tombstone Tackle wasn't that exciting to me. Looking back on him, though, I think he's a bit cooler. He's just so incredibly odd! He's a decent action figure and has a really fun gimmick that is rather quite disturbing. Thinking about all this figure has to offer, I'd easily give him a Great rating. There was a lot of creativity in these toys and Tombstone Tackle definitely brought something uniquely disturbing to the table.

Keep checking back here every day in October for more Toy Terror! Also, make sure to check out the Toy Bloggers United contest being hosted here this month! For more 31 Days of Toy Terror, check out my Hokey Halloween Horror page for spooky fun from 2016 and years past!
Posted by Barbecue17 at 10/15/2016