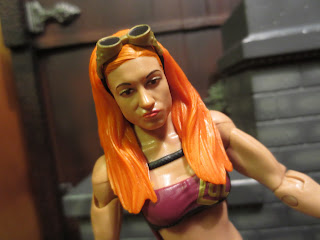 Becky Lynch is currently my favorite member of the WWE Women's Division and I'm pretty happy to have finally found her figure. Becky is the first ever Smackdown Women's Champion and overall just a fantastic performer. While I'm sure she'll get an Elite series figure soon, right now this is the best we have to add the Irish Lass Kicker to our roster. How's she do? Join me after the break to find out... 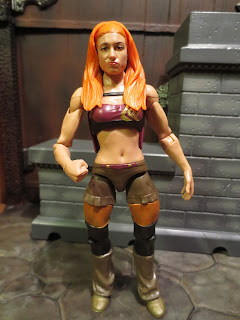 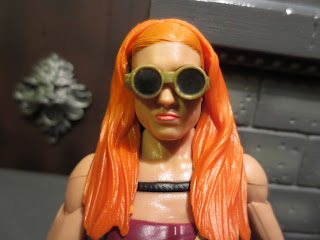 *I love Becky Lynch's goggles. I actually own a pair of these (I bought them at a taping of Smackdown and you can see me in the fourth or fifth row wearing them on the May 19th, 2016 episode) and these look pretty similar to mine. They are removable and simply plug into some spaces between her head and her hair. They can fit over her forehead or slide down on Becky's eyes for maximum coolness. 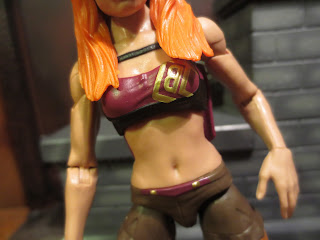 * This is a great outfit and Mattel really has went all out on it. I love the colorful attire and the neat paintwork on the logo on her top. 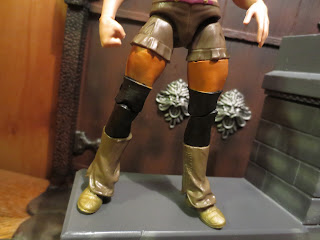 * Continuing with Becky Lynch's unique outfit, check out her pants and boots. She wearing boots, some really unique coverings over her boots, leggins of some sort, hose, and some really cool shorts. That has to be the most complex outfit of any person ever to simply cover the lower part of their body. It looks darn cool, though. 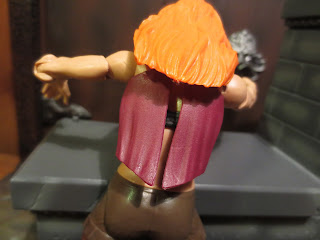 * Becky started wearing this outfit around mid 2015, shortly before the Divas Revolution, and I like the fact that Mattel used a lot of new tooling here to make Becky's look very faithful. I love the purple cape like pieces draped down behind her. They look cool and add a lot of flair spice to her look. 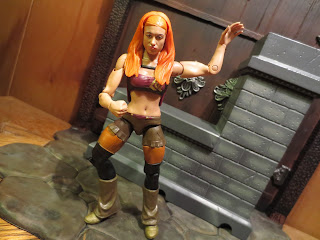 * Like the other female WWE figures, Becky is much closer to an Elite figure than the standard male "basic" body. Unfortunately, there are a lot of articulation problems. Her left ankle seems bent at an odd angle so she cannot stand flat, her hips barely move at all, the hinges on her shoulders barely want to move, and her biceps feel really, really weak. 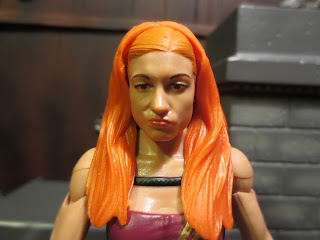 * OK, so here's my biggest problem with this figure: There's a decent Beck Lynch likeness in here but it's covered up by a very questionable facial expression. I like expressive figures, but this looks less like " Angry Becky" or "Determined Becky" or "I'm about to go Becky Balboa on you Becky" and more "I just ate some questionable sushi and I'm not sure whether to spit it our or not" Becky. It's just an odd looking headsculpt and I hope Mattel never uses it again. 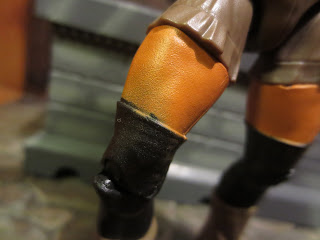 * Two problems here: First, what appears to be orange here is actually supposed to be hose of some sort. It looks really strange, doesn't it? Secondly, the paint work is very messy on the line between Becky's hose and her...leggings, I guess? The other side is just as messy, by the way. 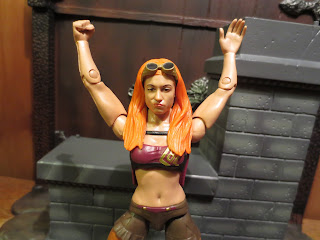 I really appreciate that Mattel did work to create a very unique figure for Becky Lynch as no one else is wearing anything close to her attire. Unfortunately, the bizarre articulation problems and very disappointing headsculpt bring things down quite a bit. Considering that Becky is currently (as of my writing this it's 10/8, so she defends the title tomorrow at No Mercy) the Smackdown Women's Champion, we're hopefully guaranteed an Elite figure down the line. I'm hoping for much better from Maiden Ireland as this figure really is an Eh and a 1/2 effort.

This is the first Becky Lynch figure Mattel has made so I haven't reviewed any others. I have reviewed plenty of other WWE figures, though, including: