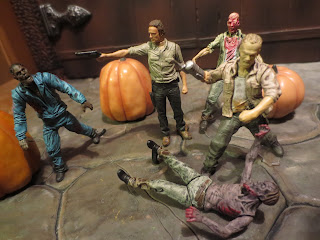 It seems that McFarlane's venture into building sets just isn't going that well. As far as I can tell both the Walking Dead series and the Game of Thrones series of building sets have been canceled (the Five Nights at Freddy's sets are pretty recent and seem to still be doing pretty well) and this might just signify the end of another experiment on McFarlane's behalf. While I've never went out and bought one of these sets at full price, whenever I've been faced with one deeply discounted I've usually picked them up. The sets themselves, when built, remind me more of model kits than traditional Lego styled building sets. I've never picked up any of the sets including just figures, though, but this one was cheap an it came with three zombies plus Rick Grimes and Merle Dixon. Just buying a box of these I'm kind of reminded of Toy Biz's Armies of Middle Earth line from the Lord of the Rings trilogy. Remember those? Anyways, let's look at some little plastic zombies after the break... 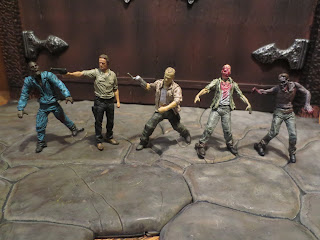 Non-Scalper Price: $11 dollars (but look around and you'll find this much, much cheaper. I did.) 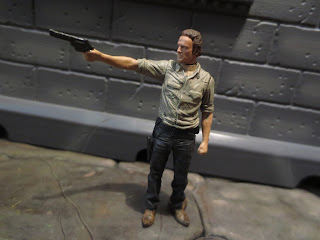 *First up is Rick Grimes, the main protagonist of The Walking Dead. These little guys actually have some decent sculpting and paintwork and they absolutely remind me of tiny versions of old school McFarlane figures like Movie Maniacs. While they are slightly articulated buildable figures where you just plug in the limbs and head to the body, they pretty much only look good in one or two poses. Rick's lower body is completely immobile but you can rotate his head and shoulders a bit. 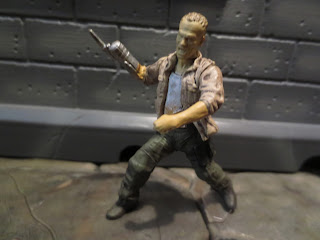 * Next up is Merle Dixon with his modified blade hand. Again, for a small figure Merle is pretty nice looking. The paintwork is above average for the scale and the level of sculpted detail is quite impressive. One of the things I find sort of frustrating about these figure packs, though, is that you get two characters and three walkers. If you're trying to buy these packs to army build zombies (which I'd expect from a "figure pack" that advertises "Build Your Apocalypse") you're going to also end up with a small squad of Ricks and Merles. Do companies just not understand stuff like that? 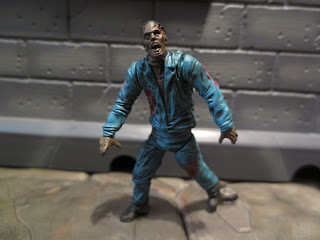 * Hey, doesn't thus guy kind of remind you of Big Daddy from Land of the Dead? This guy is a standard walker in a blue jumpsuit. He looks pretty cool but is still generic enough that you could have a few of him standing around n a display and it would look OK. Unfortunately, his legs are really awkwardly positioned. He's a real pain to stand upright. 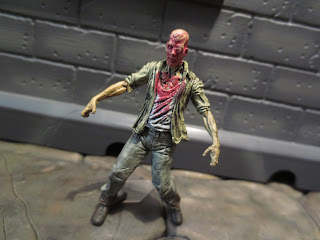 * This guy's a bit better. He's actually my favorite zombie in the set due to the very gruesome blood splatter on the head and chest. He has a great dark wash as well; it really brings out the detail. 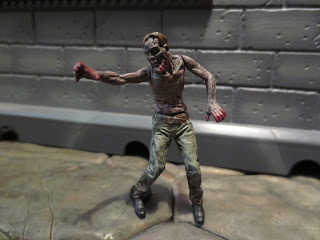 * Here's scrawny, sundried, shirtless guy! This guy is pretty cool, too. While I've picked up a few of the sets due to their diorama like qualities, I've always wondered exactly who McFarlane had in mind as an audience for these. Toy bloggers looking for Halloween content, perhaps? They're impressive but the way they're sold just doesn't really seem to mesh with how they're designed. They feel more like something you'd buy at a hobby shop to build a large diorama, but they're sold in oddly packaged sets with interior room designs and blind bagged packages. 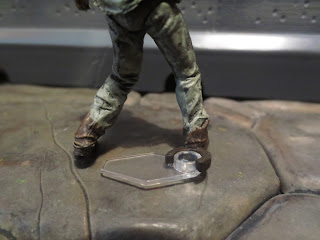 *While The Walking Dead building sets use a system of studs similar to Lego to attach the bricks, the figures themselves don't have foot begs to attach to the studs. Actually, most sets have smooth surfaces so that wouldn't even work. Instead, each figure has a plastic clip on one of their ankles that can attach to a raised stud or to one of the included stands. I have to say that I really hate this idea. It's really cumbersome. Why not just include small clear stands with holes in the feet or something? It's really tough to keep some of these figures standing up. 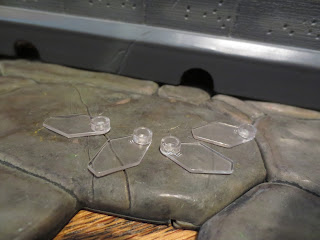 * Here are the clear plastic stands used to keep these guys up. Let me say that, unless you have a figure standing straight up or with a perfect center of balance, they're practically useless. Also, I only received four. Their are five figures in the set, though, so either one got left out or McFarlane assumed I was only going to display 4/5ths of my purchase. With some of the odd choices McFarlane has been making lately, I'm not sure which is the correct answer. 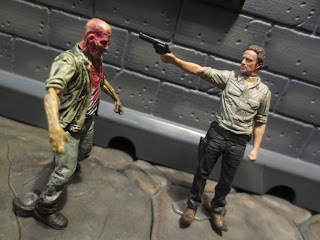 These figures do look pretty impressive, I'm just not sure what most toy collectors would do with them. I like the diorama like quality of these but I can't see wanting to army build these. That seems to be what McFarlane is implying with these, but what would you do? They look good and definitely have fairly high production values, although they fall over rather easily. It's a Good set, but I'm just not sure what to do with it.

Keep checking back here every day in October for more Toy Terror! Also, make sure to check out the Toy Bloggers United contest being hosted here this month! For more 31 Days of Toy Terror, check out my Hokey Halloween Horror page for spooky fun from 2016 and years past!
Posted by Barbecue17 at 10/13/2016