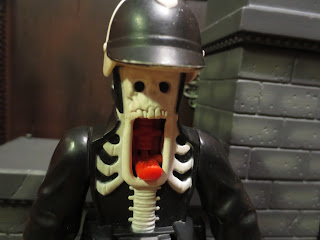 Today's installment of 31 Days of Toy Terror Lives features yet another figure from Kenner's The Real Ghostbusters line: X-Cop from the Haunted Humans subset. X-Cop is a crazed skeleton disguised as a motorcycle cop. You know, looking back I had quite a few motorcycle cop action figures as a kid: The T-1000 from Terminator 2: Judgment Day, Eugene Tackleberry from Police Academy, Highway from C.O.P.S., and X-Cop here. And all made by Kenner, right? Interesting coincidence! Maybe there was a former motorcycle cop working for Kenner during that time who kept submitting motorcycle cop themed action figures? Anyways, let's get to the spooky and take a closer look at this vintage action figure after the break... 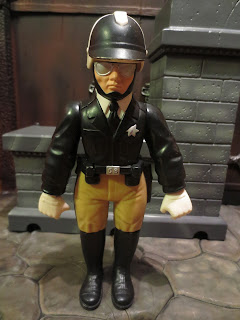 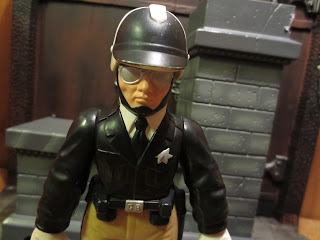 * Again, when you realize that these aren't supposed to be actual humans but merely human-like shells that hide the devious ghosts dwelling inside, the slightly odd appearances become more disturbing. Something about this guy reminds me of the cop from Psycho that pulls Marion Crane over. I think they both have the same stare. 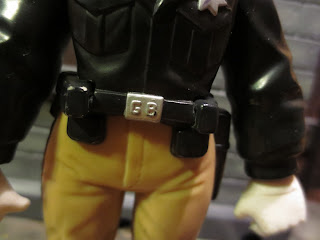 * X-Cop has a patrol belt with a few little pouches that hide the hinges for his action feature and a non-removable pistol holstered on his left hip. There's also a belt buckle with the initials "GB." Is that for Ghostbusters? Why would a ghost be wearing a belt with a Ghostbusters reference? Odd, huh? 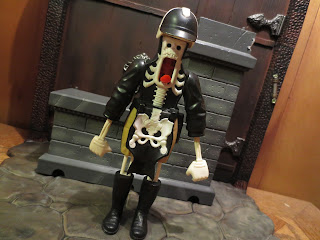 * This guy is crazy! Push a small button on the back of his belt and his helmet raises up, his chest drops down, and a creepy red tongue pops out of his mouth, transforming X-Cop into a terrifying skeleton. Yikes! While I think X-Cop is quite possibly the goofiest looking transformed monster in this series, there is something coop about the fact that he transforms so drastically at the push of a button. 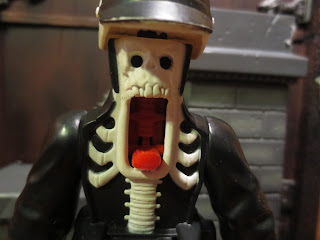 * Here's a close up of his face. I do just love the tongue. Is that a spine in his throat, though? Does that make anatomical sense? Maybe. I do like his hollow eyes, too. Not sure what's going on with his ribs, though. 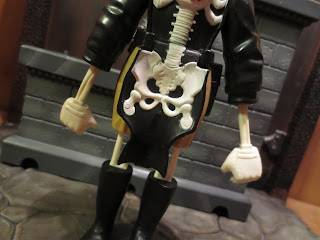 * Here's a close up picture of X-Cop's crotch. It's really bony, just like the rest of him. Again, it's a really cheesy effect but there's something I can respect about the creativity. It's funny to me how the Real Ghostbusters toyline really went in the direction of using Fright Features to have the ghosts scare the heroes, particularly considering that the Ghostbusters motto is "I ain't afraid of no ghosts." It did give Kenner a chance to create some school transformation effects that took effect with the push of a button. 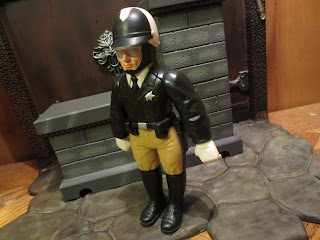 
* One negative about X-Cop is that he's a really stiff figure. His legs are solid and his arms only swivel. You're really stuck with this guy just standing around in a single pose. 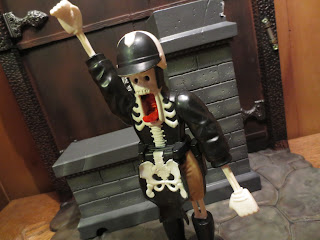 * X-Cop's shoulders are also really, really loose. Kind of like your mom. I seem to recall that my original childhood X-Cop was this loose as well (he was also like your mom) and thus this may not be due to age. Unless you out his arm directly above his head, they're not going to do anything but hand at his side. 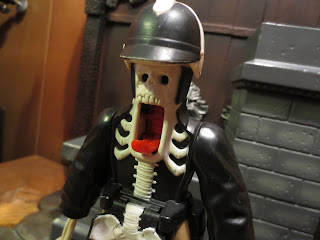 X-Cop isn't the best figure in this series but he's still fun. Kenner created some clever toys that, while overly dependent on an action feature, are still really fun today. X-Cop is kind of unique and Kenner's work here is definitely a spiritual precursor to many later lines like Toy Biz's X-Men, Tyco's Crash Dummies, and Kenner's own Beetlejuice and Mummies Alive. He gets a Good and a 1/2 from me. Like the skeleton from The House on Haunted Hill, he's not scary but he does have a certain undeniable supernatural charm.

Keep checking back here every day in October for more Toy Terror! Also, make sure to check out the Toy Bloggers United contest being hosted here this month! For more 31 Days of Toy Terror, check out my Hokey Halloween Horror page for spooky fun from 2016 and years past!
Posted by Barbecue17 at 10/21/2016