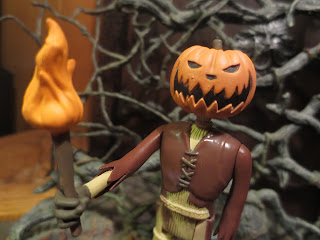 Trick 'r Treat is both one of my favorite horror and Halloween films, and I absolutely love Sam, but I'm not sure I really want to see him become the unofficial symbol of Halloween when we already have guy who has been around for 20+ years as the Pumpkin King: Jack Skellington! Yeah, he dabbled in Christmas a bit, but I really think that Jack Skellington should be the mascot of Halloween. I honestly cannot even begin to describe the mixture of utter fascination mixed with a bit of dread that I experienced when I saw The Nightmare Before Christmas as a child. The first 10 minutes of the movie is quite possibly one of the greatest things ever put to film and is just absolutely wonderful. It's amazing that I can watch that scene 20+ years later and still be as in awe of it now as I was as a kid. A huge part of that has to do with the amazing first appearance of Jack in his guise of the Pumpkin King. I am absolutely in love with this character design! Series 2 of Funko's Nightmare Before Christmas ReAction line has started hitting stores this past month and Pumpkin Jack is the first figure I'll be looking at. Ready for a closer look? Then join me after the break... 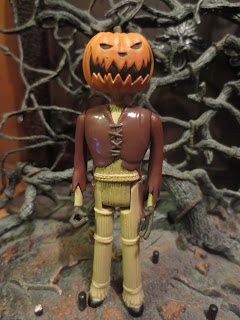 Non-Scalper Price: $10 (although I picked all of these up at Toys 'R Us over two different sales for $7.50 each) 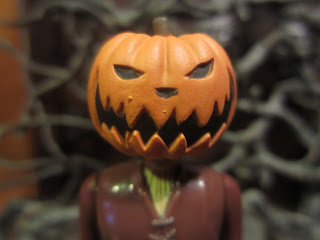 * As you can guess, I've always had an affinity for characters with pumpkins for heads (just look at my picture on the side) so the Pumpkin King is right up my alley. I've loved this character design since I was a child and Funko just nailed it here. He's incredible! I love how gorgeous the paint is on this one. It looks like Funko took the tiniest pumpkin they could find and actually stuck it on a 1/18th scale action figure. 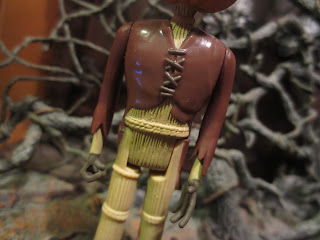 * Pumpkin King Jack's outfit looks amazing! It's simple: Just a covering of straw that adds to the scarecrow effect but looks like clothing and a simple raggedy jacket tied together at the chest with some old cord. Simple works well sometimes, though, and Funko perfectly captured the essence of this outfit. 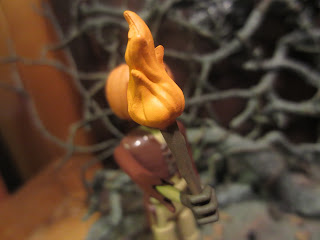 * Pumpkin King Jack comes with the torch he uses as part of the Halloween celebration! It's a pretty nicely sculpted 1/18th scale torch with handle that looks like a simple tree limb (there are even little knots on it) and an orange painted flame. It fits perfectly in Jack's right hand. 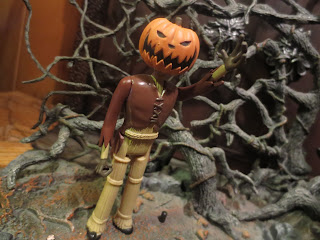 * There's something about Jack's construction that feels a bit off. I know Jack is a spindly character, but this figure feels a bit flimsy. Heck, the joints even feel a bit loose. He stands fine and retains poses, but he seems to feel all wibbly-wobbly when you pick him up. He's not the most solid feeling ReAction figure, for sure. Due to being a bit wobbly, Pumpkin King Jack isn't perfect. He's pretty awesome looking, though, and I do love how well Funko captured some of his details such as the Jack O' Lantern head, the spindly twig hands, and the straw body. A sign with the "Halloween Town" name would have been very welcome, but the torch provides something for the figure to hold. Jack is a Good and a 1/2 figure that might not be the best ReAction figure out there but that certainly captures the spirit of the character. I've been seeing these at Toys 'R Us (I know mine has restocked the series at least once now) so maybe that's a place you'll want to go Trick 'r Treat today.

I'm going to be covering all of series 2 of this line over the next few weeks, but for now you can check out one of the other series 1 figures I reviewed, Behemoth
Posted by Barbecue17 at 10/31/2016