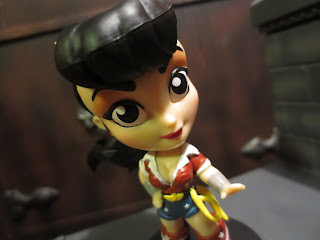 Today I'm looking at the Lil Bombshells version of the original DC Comics Bombshell: Wonder Woman. Wonder Woman was the first character released in the Bombshells statue line (in September of 2013) and she has continued to be the face of the line. That makes perfect sense, though, as not only is Wonder Woman pretty much the First Lady of DC Comic but she's 1/3rd of DC's top tier trinity of superheroes. Let's take a look at this stylized version of this powerful hero after the break... 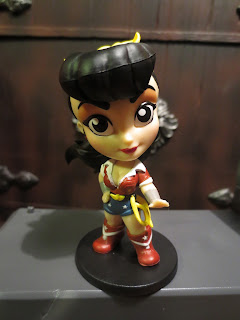 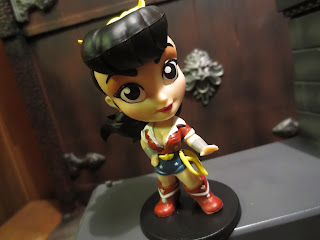 * This version of Wonder Woman is wearing pretty much the same outfit as the actual statue and that's perfectly fine: This is an incredible look for Wonder Woman! It's interesting to see this costume as Wonder Woman was created in 1941, the same time period as the Bombshells represent. It looks great, though, and is quite possibly the perfect blend between the superhero look and the 1940's bombshell aesthetic. I'm digging the presence of Princess Diana's lasso of truth, too. This design is just incredible all the way around. 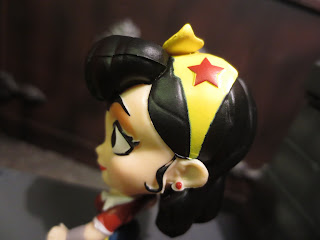 * I love the bandanna over her head that Wonder Woman wears. Not only does it nicely pay homage to Wonder Woman's classic tiara but it also pays tribute to the iconic Rosie the Riveter who clearly inspires this line in some ways. 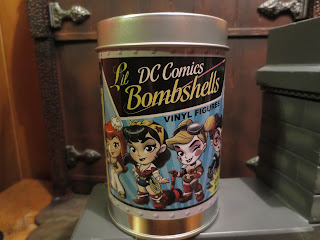 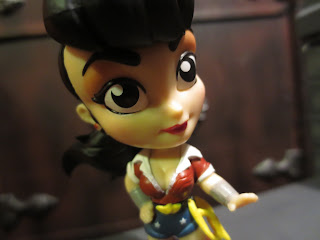 Wonder Woman is really the flagship character of this line and I can't imagine anyone wanting to collect these but not wanting her. Again, Cryptozoic has taken the artwork of Ant Lucia and changed it just a bit to make something smaller and a bit more caricatured. Wonder Woman has an excellent paintjob, a solid design, and some nice sculpting for such a small figure. She's easily worth picking up and is a Great minifigure! There's a black and white variant of her out there, too, if you're intrigued by that sort of thing.

I have reviewed a few other Wonder Woman products including the Kotobukiya Boshoujo Armored Wonder Woman, the New 52 Wonder Woman versus Katana 2-pack, the Gal Gadot inspired Wonder Woman from Mattel's DC Comics Multiverse: BvS line, and a set of Batgirl and Wonder Woman Magnetic Salt & Pepper Shakers.
Posted by Barbecue17 at 10/14/2016