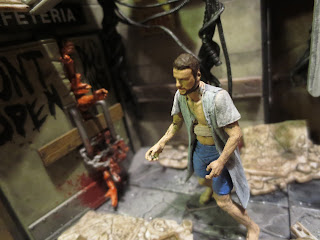 Who did Negan Kill on the Walking Dead season premiere? I don't know: I'm about 4 season behind! Ready for another spooky building set review instead? Today I'm kind of transporting you back to Halloween night 2010 when AMC's The Walking Dead first premiered. It might be a bit of a horror trope at this point but it's still a really effective beginning to have a character wake up in a medical setting and learn, by themselves, that the world has fallen apart. McFarlane Toys has chosen to capture this moment from the first episode quite nicely in this small building set that was released in 2015. While the fate of future sets seems rather uncertain, let's give this one a closer look, shall we? 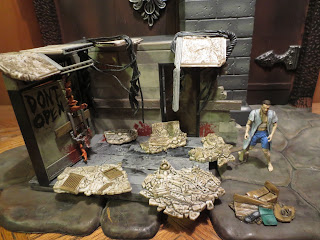 Non-Scalper Price: $10 to $14 dollars (but shop around and you'll find it even cheaper!) 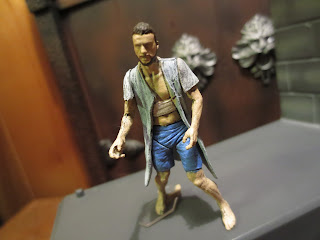 * The set only comes with one figure, but it's a decent one: Rick Grimes in his hospital gown. It's a pretty nice figure, especially considering it's only around 2 1/4 inches tall. The arms, head, and waist can be moved to change up Rick's pose a bit (the legs are technically articulated, too, but you can really do anything with them) and he comes with a clear plastic base to help him stand. 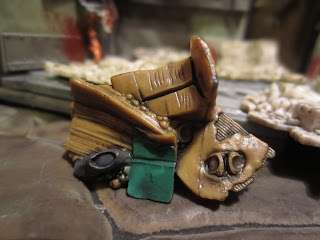 * These sets are really more like snap together models than Lego building sets and that really shows in the details. There is a ton of sculpted detail here and it's rather fun to look around and see what all you can spot. This little piece is just an extra pile of debris that can be moved around to different parts of the set as needed to convey that the hospital was at one time a more chaotic environment. 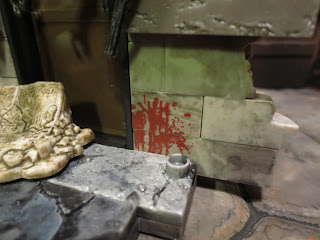 * To add to the atmosphere even the various bricks that makeup the walls are detailed. Whether it's just a grimy spatter or a full on blood splatter, the individual bricks look like they each tell a story. You have to really think about where you want to put them so they look best, but I do appreciate the detail on the bricks. Each one feels truly unique. 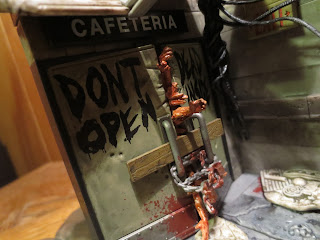 * The main attraction of this set is the barred door to the cafeteria. Not only is there a wood plank in the handles but there are blood soaked chains wrapped around them, too. The words "DONT OPEN DEAD INSIDE" are hastily scrawled on the doors, which look suitable beaten and battered. Oh, and the arms of a small herd of the undead are poking through. This setup consists of multiple non Lego-like pieces and is tricky to build but looks great. I really like this set and it's this detail that makes it far more interesting than most others. 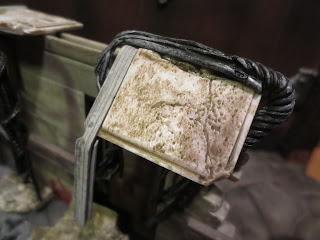 * Along the top of the playset are some various pieces of bent rafters and the ceiling tiles they were holding up. The weathering and wear on these look incredible; they definitely give the set a very unhinged, nontraditional "building set" look to it. I love the effect here. If there's one thing that McFarlane consistently does well it's paint applications and washes on their product. 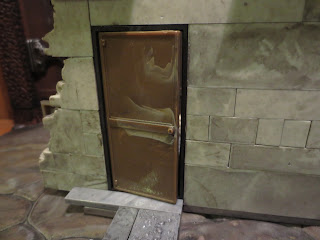 * Perhaps the only "play feature" on this set is that the lone non-barred door opens. It's a cool feature because you can pose Rick coming through the door or have the door ajar. You could also put some lighting (such as a battery operated tealight) behind the set and have it stream through the door. 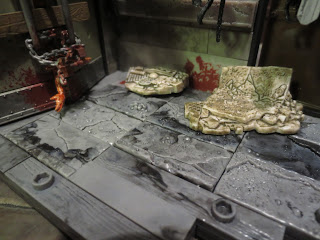 * The floor itself is even rather impressive. Not only is each tile uniquely sculpted with various cracks and bits of debris but the paint work is rather unique. This just seems like a really grimy, nasty place, doesn't it? 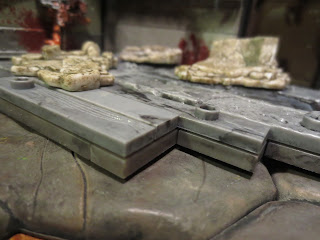 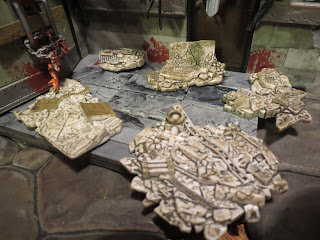 * These large stacks of debris are all over the base of the playset. While they're easily moved (they have holes on the bottom that can attach to a number of exposed studs) the way they're shown in the instructions definitely takes up a ton of real estate on the playsets base. Some of them are quite large, as well, which kind of kills the random debris effect a bit. They're also kind of rubbery and it's rather tricky to get them to stay securely on the playset base. 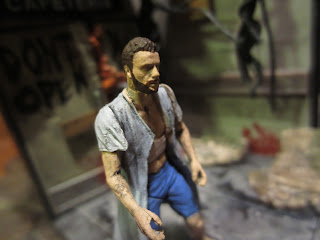 You know what? I really, really like this set. It may not be the kind of toy you actually play with like a Lego set but it does make a really impressive diorama considering you can pick this up for around $10 dollars. I'm giving it a Great and a 1/2 as I think it's probably the best The Walking Dead set I've reviewed in this line. It's a fairly iconic scene handled almost flawlessly by McFarlane. What's not to like? If you're at all curious as to what these sets are, give this one a look and determine if they're something you're interested in. I think zombie fans and horror fans in general will appreciate it.

Keep checking back here every day in October for more Toy Terror! Also, make sure to check out the Toy Bloggers United contest being hosted here this month! For more 31 Days of Toy Terror, check out my Hokey Halloween Horror page for spooky fun from 2016 and years past!
Posted by Barbecue17 at 10/24/2016