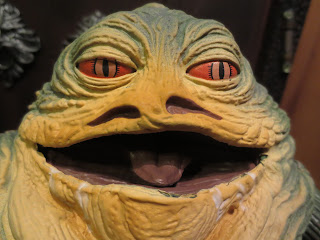 For today's installment of 31 Days of toy terror I'm looking at something a bit different: Jabba the Hutt from Hasbro's Star Wars: The Black Series! Originally released as an SDCC exclusive in 2014 Jabba also made his way to regular retail shelves later on. Jabba the Hutt has always been one of my favorite Star Wars characters as even though he largely just sits around doing nothing, he still comes across as a menacing being. I love the creature effects in Return of the Jedi and Jabba's Palace has always been one of my favorite scenes. Jabba is an amazing movie monster that still holds up well (much better than the computer generated versions from thee various special editions of A New Hope) and I decided to give him a spot on 31 Days of Toy Terror. Enjoy! 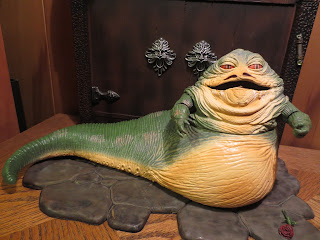 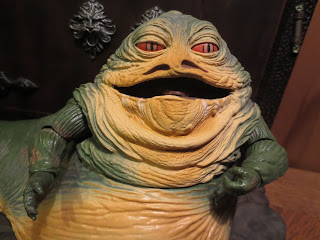 * Jabba looks like Jabba, and that's always a good thing. This guy is hideous and I couldn't be happier. I own a number of Jabba the Hutt action figures and this guy is definitely the largest one I own and possibly the most film accurate. Jabba has such a distinctive look but it's very easy to get him wrong. Hasbro didn't do that here; he's dead on. 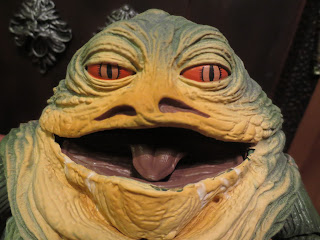 * It's interesting that Hasbro chose to give Jabba an honest to goodness action feature as I can't think of any figure in the line that had one (well, maybe R2-D2's retractable leg might count) at this point. When you pull down either of Jabba's arms his mouth opens up revealing his gaping maw and his slimy tongue. It's honestly kind of cool, although I do wish something else moved the mouth. Being able to keep it open by itself would have been neat, too. 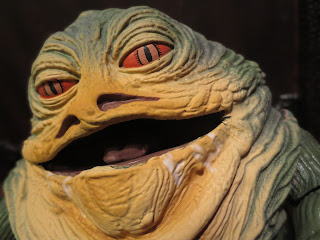 * I'm a big fan of the paintwork on this figure. Again, considering this guy was a mass market release, I'm really impressed by the very lifelike eyes (well, you know, lifelike so far as Hutts go) and the drool coming out of his mouth. Bo shuda! 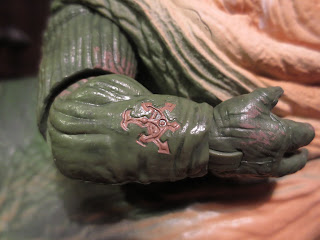 * Check out the cool little tattoo on Jabba's arm. Again, there really are a lot of nice details on the figure. Jabba's skin is quite detailed and features a number of paint effects to show that this guy's got a lot of mileage on him despite the fact that he doesn't look like he moves all that much. 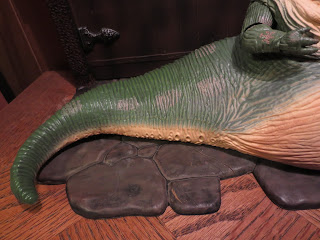 * Probably as an effort to reduce costs since he's a pretty large figure, Hasbro did cast Jabba's lower body as a rotocast plastic piece. That means he's hollow and somewhat flexible. It wasn't a terrible choice as they still managed to capture a nice amount of detail in the sculpt. I like the details on Jabba's body and the seamless look of his tail. Also, the suckers popping out underneath his body are really cool. This guy has some pretty nice paintwork for the price. 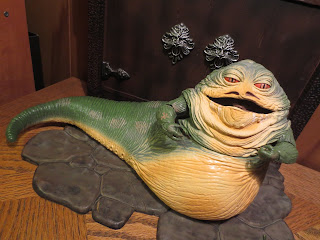 * I think it's just going to be the nature of the beast when creating a figure of Jabba the Hutt, but this guy really doesn't have that much articulation. His arms are nice but that's about all he has other than a swivel at his waist. A balljointed waist would have been so much better! I'm not sure if I would sacrifice the appearance of the figure for a segmented tail, but something a bit more mobile would have been welcome. 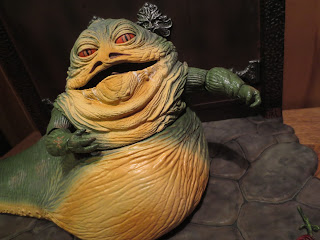 *  The reason I put off buying Jabba for so long is that he comes with no accessories whatsoever. The SDCC exclusive came with Salacious Crumb and Jabba's pipe and bowl but the regular release excluded these things. Hasbro did something similar with 2013's Boba Fett but it just seems egregious for Jabba to not come with anything. I mean, he's just sitting around? Salacious Crumb is a huge loss as he's effectively a character we probably just won't see again. Fortunately, for $12 bucks, I was able to overlook it. At the original $40 though I wasn't going to. 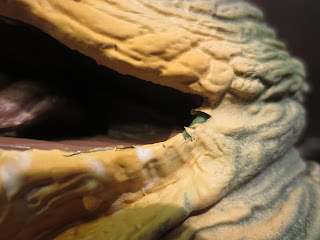 * The other concerning thing about Jabba is that his head and upper torso are molded in a soft, rubbery plastic that gives the allusion of actual flesh. It's a cool feature and allows the opening mouth to function but it's already starting to crack a bit. Whether this is just the paint chipping away or the plastic beginning to deteriorate remains to be seen, but it's pretty frustrating. A lot of toys using this type of material (the Lord of the Rings Cave Troll comes to mind) have similar problems. 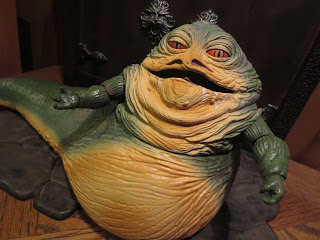 Overall, while Hasbro tried some cool things here, Jabba just feels really average. While I'm concerned about the damage already starting to show around his mouth, the thing that irritates me the most is the lack of accessories. I'm really getting sick of Hasbro's Black Series SDCC blunders. Fortunately this year I managed to snag both SDCC exclusives that contained extras, but this has been the only year I could do so. Without his dais, pipe, and Salacious Crumb, Jabba just seems a bit less grandiose. For the $12 I got this guy for at Hasbro Toy Shop, he's a steal. Otherwise, he's simply Good.

I own quite a few Jabba the Hutt figures but I haven't reviewed any of them on here before. I have, however, reviewed plenty of figures from Star Wars: The Black Series:

Keep checking back here every day in October for more Toy Terror! Also, make sure to check out the Toy Bloggers United contest being hosted here this month! For more 31 Days of Toy Terror, check out my Hokey Halloween Horror page for spooky fun from 2016 and years past!
Posted by Barbecue17 at 10/25/2016