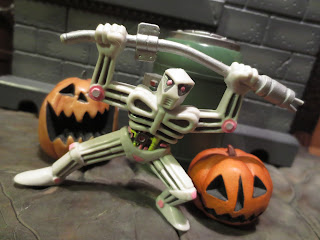 Today as part of 31 Days of Toy Terror I have a spooky skeleton for you! He's not your average skeleton, though: This guy seems to be made of various mechanical parts! He's called Fuminoid and he's from Galoob's Trash Bag Bunch minifigure toyline. I just picked him up in August and, as soon as I opened him, I knew he was a perfect addition to the sheer since of dread and horror that is 31 Days of Toy Terror Lives! Plus, I photographed him in front of some pumpkins and a toxic waste barrel. Ooohh!!! If you've got the guts join me after the break as we take a closer look at Fuminoid! 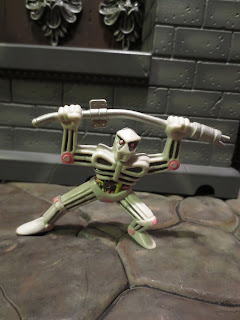 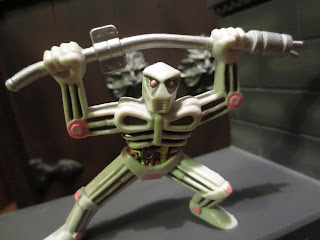 * Does this guy not look awesome? Fuminoid is a robotic skeleton who doesn't care about anyone or anything. He has a really impressive sculpt and some cool neon inner-workings that you can see hanging out below his rib cage. They're neon because A. Fuminoid's man enough to like what ever color he likes and B. It was the early 1990s. Just saying. 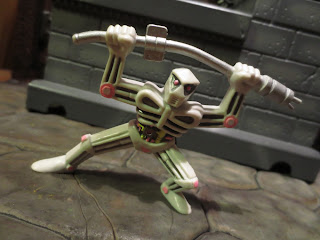 * I love Fuminoid's pose, too. He looks like a ninja of some sort. A robotic, skeletal ninja made from the spare parts of a super cool Japanese motorcycle and a Ford Fiesta. Having his right leg extended and his hands raised above him wielding a tailpipe, you know this guy is just up to no good. How did this guy never get his own licensed merchandise? He's incredible! 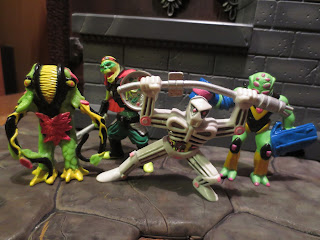 Fuminoid is terrifying, ninja-esque, non-biodegradable, angry, and a Scorpio. He's also a really, really cool minifigure that is hands down one of the best in the line. While I've never had a strong feeling as to who the leader of the Trashors was (I've always used Muck Master just because), Fuminoid definitely seems like the team's resident professional. He's kind of like the Storm Shadow of the Trashors, although I don't think he has any desire to up and join the Disposers. While some Trashors I use as army builders, Fuminoid is definitely a unique character in my mind. The universe couldn't begin to fathom two Fuminoids! This guy is pure, 100% Epic.

Keep checking back here every day in October for more Toy Terror! Also, make sure to check out the Toy Bloggers United contest being hosted here this month! For more 31 Days of Toy Terror, check out my Hokey Halloween Horror page for spooky fun from 2016 and years past!
Posted by Barbecue17 at 10/28/2016