Road to Rogue One: Darth Vader [Bespin] #158 from Pop! Star Wars by Funko 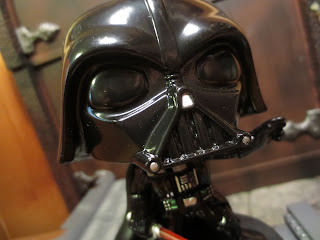 Today as part of the Road to Rogue One I'm looking at the first of two exclusive Funko Pop! figures included with the September crate. The latest crate's theme is "The Death Star" and you get a nice assortment of items adorned with various Imperial characters and symbols. Being a hardcore Star Wars fan that likes Funko Pop! figures with a child who loves Star Wars, this crate is always a good value for me. This time, for $25 bucks, I got two new exclusive Pop! vinyls (the second is Tarkin!), a Star Wars t-shirt, a patch and pin, and a Death Star luggage tag (I'm contemplating putting the luggage tag on my little one's backpack so if she loses it it will have an easily recognizable ID on it). There's really some cool stuff in these and I think the value is definitely there. Want to check out this new, exclusive Darth Vader Pop!? Then join me after the break... 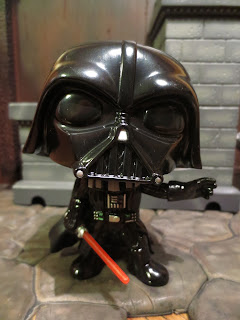 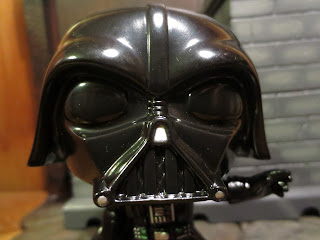 * I love the stylized look of Vader's helmet. It just looks really cool in this somewhat deformed style. It's clearly Vader and the grill and eyes are spot on. The helmet looks much more normal in person than it does in my picture (trick of the glare coming off of it, I believe) and it's fun to see one of the most recognizable villains of all time in this style. 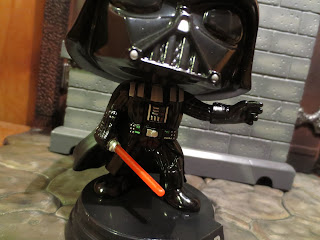 * Vader's costume is impressive. Most impressive. While the proportions are somewhat exaggerated, I'd argue that it's as accurate as any 1/18th scale Vader Hasbro has released in their more kid friendly Star Wars lines. The paint apps on all of the little buttons are very neat and clean. The ignited lightsaber looks really cool, too. I love the translucent blade on it. 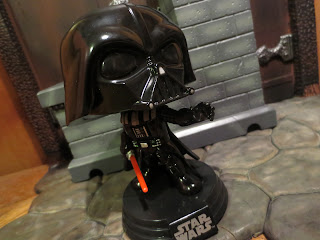 * One thing that's really cool, and a bit unique, about this Pop! is that it is posed sideways. Since this is capturing Vader as he extends his hand out to Luke on Bespin, tempting him to join the Dark Side, Vader is standing looking off to the side. If Funko ever makes an injured Luke (my guess is that they will) then this would look awesome paired with him. 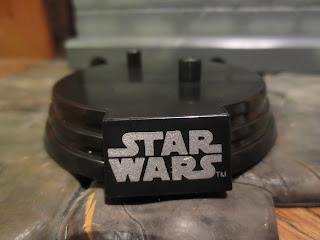 * The Star Wars Pop! figures all come with a nice, simple display stand. I like the uniformity of these and the way they help the figures stand securely on the shelf. We display a number of Pop! figures in the living room, which is dog territory, so I'm way more confident that these ones will be less likely to take a tumble and get snacked on. 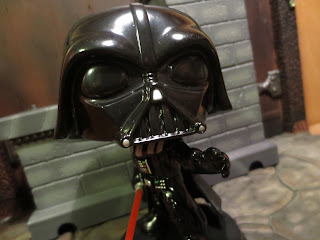 * This isn't a negative of this figure, but a negative of the marketing: Why is Bespin Vader coming with this installment of the Smuggler's Bounty crate that's marketed as the Death Star crate? Wouldn't a "Choking Someone" Vader have made more sense? It would have, but Gamestop has that as their current exclusive. To preserve the idea of a theme (which I like) maybe a Vader with Obi-Wan's cloak on the ground at his feet would have been a more appropriate option? 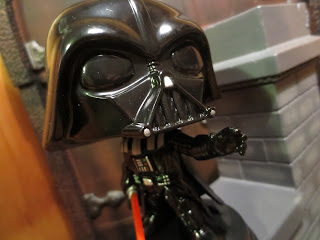 Darth Vader in this pose from the famous Bespin duel (my second favorite lightsaber duel in the saga) is really cool. Yeah, he doesn't quite fit into the Death Star theme of this set, but that's not a huge deal with a cool figure like this. It's nice that these Smuggler's Bounty crates are giving us a good mix of A-list characters alongside of more minor characters. This is a Great Pop! and, if you don't own a Vader, it's tough to argue that this isn't the way to go. If you sign up for the service Funko does let you order older crates that they still have in stock for a discounted price, so you might want to check this one out.

I've reviewed quite a few other Pop! Star Wars figures, including: