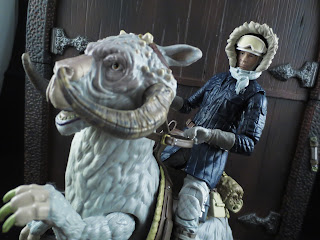 It's time for another Star Wars: The Black Series review! As I'm working to get caught up on this line, today I'm checking out another of the Phase II two-packs, this one featuring Captain Han Solo with the Tauntaun he rides on Hoth. Since the scenes on Hoth tend to be some of the best loved in the entire Star Wars saga, it was probably a good idea that Hasbro released them to try and gain a bit more traction for the deluxe sets. I'm not sure that I ever saw these sit on shelves the way I did the Jabba the Hutt set, although they haven't set the secondary market on fire yet. Recently I've reclaimed my POTF2 12 inch Tauntaun from my parent's house and my little two-year old plays with both that Tauntaun and a big stuffed Tauntaun I bought her sometime last year. This one, though? This one is all mine. Ready for a closer look at these two? Then join me after the break... 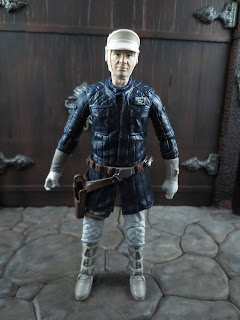 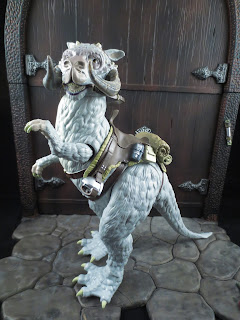 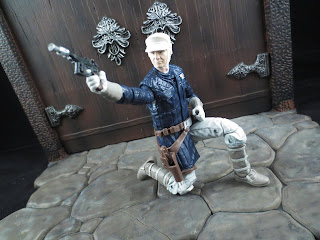 
* Han's articulation is pretty good. These are definitely durable, well constructed action figures and Han's no exception. I really love the fact that he can take a kneeling post. I'm not sure why that is always such a big deal to me, but it just looks really cool. 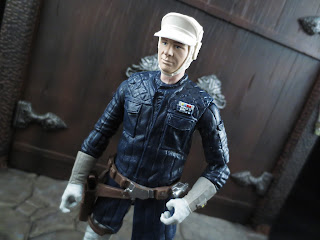 * Han's sculpt is comparable with most other figures in the line: It's not amazingly life-like or anything but it's solid work. I don't think there could really be much doubt as to who it is under that cold weather cap. What's interesting is that Hasbro went with a blue jacket here. While there has been much controversy over whether the jacket was blue or brown (the reality is that the prop was brown but the tinting of the film made it blue, kind of like the Xenomorphs in Aliens) Hasbro went with blue. While not "screen accurate" it's the color of the figure I've owned since childhood, so I'm happy with that. 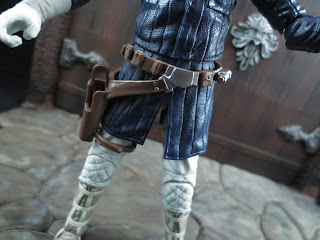 * Of course, Han is rocking his holster. It's a separate piece that rests over his coat and it's perfect for storing his blaster when it's not in use. The belt unsnaps in the back and can be slid down over his right leg if you want to remove it. 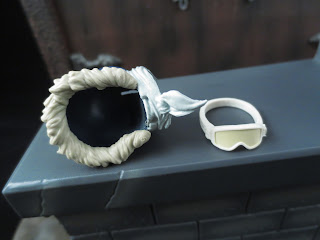 * I'm going to have a few complaints about these items in a second, so bear with me, but I do want to say that I appreciate that Hasbro tried to do something unique by including Han's hood and goggles as separate pieces. The hood is made from a softer rubber and fits over Han head while the goggles can be worn over his eyes or on the brim of his hat. 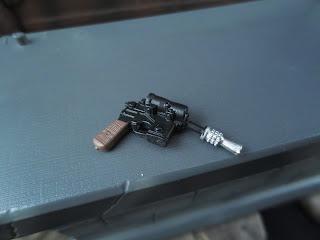 * Han comes with a DL-44 Heavy Blaster pistol. Interestingly, Han's blaster TESB isn't unique like in ANH, so it's pretty much the same as Luke's. This version is accurate, then, and it's a nice little accessory that is more than capable of destroying any Probe Droids you might encounter. 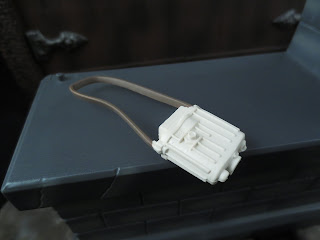 * I'm glad that Han came packaged with a little something extra: His macrobinoculars. They're a bit plain but the sculpt is nice and they can be worn around his neck or over his shoulder. Extra prop items like this are always a plus. 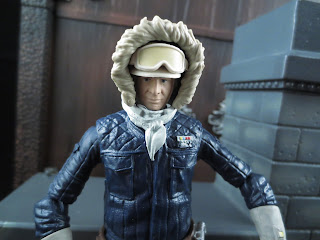 * One nice thing about the hood and goggles being extra accessories is that they do help to give Han's outfit a large, oversized layered look. That's usually not a desirable thing but I think it works with the Hoth gear. You can also have a bit of freedom to decide how to display him and that's something that is always welcome. 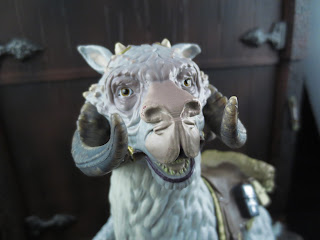 * I really like the headsculpt on the Tauntaun. It's set on a fairly decent balljoint and it just looks really cool. I love Tauntauns and this one just rocks. The paintwork and sculpted details really capture the essence of these gentle snow lizards. 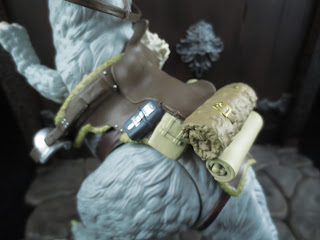 * The Tauntaun's saddle is also a pretty nice piece. It's not removable or anything, but it is incredibly functional. It also features some great sculpting and plenty of solid paint applications. 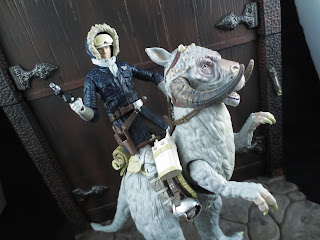 * Han easily fits on the Tauntaun's back! He looks really great on there, too. The scale seems just right to me. He can easily grasp the reins and slide his feet into the stirrups. The Tauntaun also balances quite well and looks great on display. 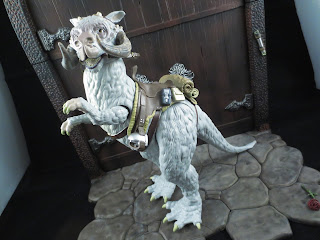 * While the Tauntaun looks pretty sharp, the functionality isn't that great. Not only are the Tauntaun's legs and arms just simple swivel joints but the figure doesn't even feel that impressive. It's weird and hollow feeling. Not rotocast, though; more of a cheap plastic feeling. Honestly, it doesn't feel that different than the vintage Tauntaun. The Wampa was really well done, but the Tauntaun just feels rather lacking. 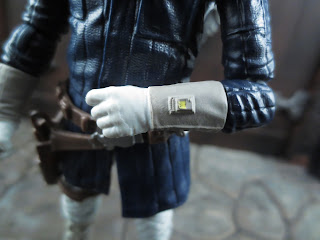 * Like the Luke Skywalker figure adorned in his cold weather gear, Han also only has swivel forearms rather than swivel/hinge wrists. Missing this joint isn't the end of the world but it was an odd choice for Hasbro to make, particularly considering that I'm had pressed to think of another standard figure in this line lacking that joint. 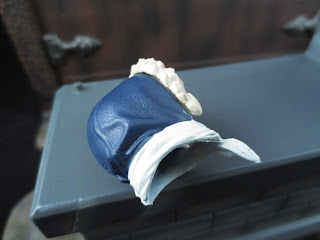 * I don't mind that the hood is made from a rubbery material but what does seem rather odd is that the fur lining is a separate piece that's already starting to fall off. I think it could be easily glued, but that's disappointing for an accessory to be falling apart that's designed to be flexible and removable. Perhaps having the option of an alternate head would have been a better idea. 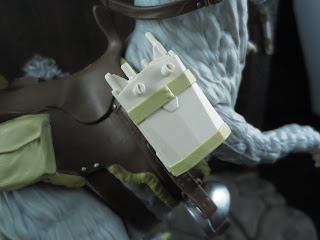 * It's cool that the portable scanner that Han uses to find Luke is present here but why not just make it an additional accessory that could be attached to the Tauntaun's saddle? Having this as a permanent part of the sculpt just seems like an odd decision. 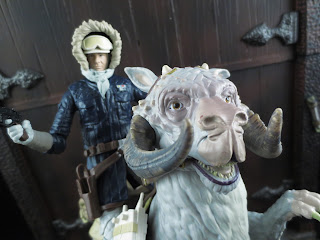 While the Luke Skywalker and Wampa set was pretty impressive, this set is less so. Han is OK by himself (although the hood is a bit frustrating since it's coming apart already) but the Tauntaun just feels much cheaper than the Wampa. I like the look of it, but the fact that the Tauntaun is minimally articulated and feels hollow just doesn't work for me. Overall, this is a pretty average set, which nets a Good rating (which is really an average rating, FYI). I doubt collectors of this line are going to want to skip out on Han in his Hoth gear, but make sure to look around and get a deal on this set if you can.


I've reviewed other versions of Han Solo, including the Black Series A New Hope Han Solo, Han Solo in Stormtrooper Disguise, and the fairly recent The Force Awakens Han Solo. I've also reviewed the Hero Mashers Han Solo Vs. Boba Fett and talked about one of my first ever Star Wars toys, the vintage Han Solo in Hoth Gear and a Tauntaun! Of course, I've reviewed plenty of other figures from the Black Series, including: