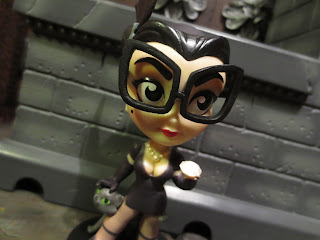 While these reviews may get mixed up a bit due to Halloween, Catwoman is the final figure I needed from this series to end up with all 10 of the individual Bombshells. Known as Selina Digatti in the Bobmshells, this figure perfectly represents the feline femme fatale. She's a fairly elaborate minifigure with lots of unique design elements that make her really appealing. Let's take a closer look at this black cat, shall we? Join me after the break... 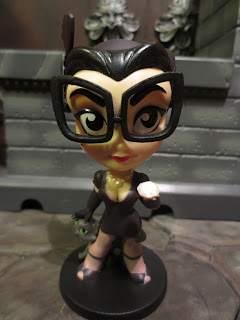 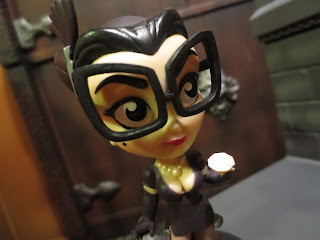 * I really like how the design of the figure captures Catwoman's aesthetic in a classic style. The thick, fasionable glasses really suggest the idea of Catwoman's distinctive goggles in her modern designs or her domino mask in some older depictions. The pearl necklace and large diamond she's holding also add some intrigue to the figure. I love that she has some cool props like these! Selina has a fairly significant role thus far in the Bombshells comic, and these elements tie right in with that. 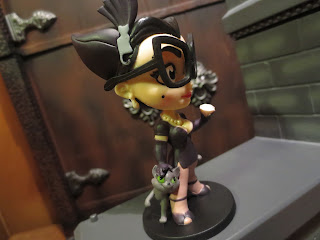 * Catwoman has some other cool details, particularly the cat hanging around by her feet. I really like this element. It's kind of cute and it fits in with the somewhat more "cutesy" look of this line. I'm also digging the hat she wearing (with cat ear like flaps on the sides) and the grey cat pin on the side. 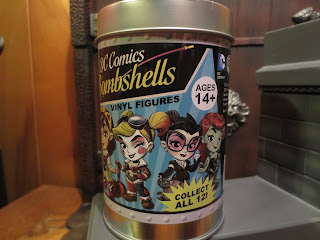 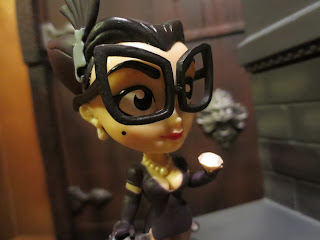 Catwoman turned out to be a really nice minifigure with some incredible detail. I really like the amount of extra elements too, such as her glasses and the cat hanging around at her feet. She's not one of the most creative interpretations in the line but she fits in will with the rest of the figures. She's a Great minifigure with a solid sculpt and really nice paintwork. Again, while these are a bit pricey, Cryptozoic definitely went all out on releasing a quality product. They have a series 1.5 coming out with repaints of these same sculpts, but I'm now really looking forward to the inevitable series 2!