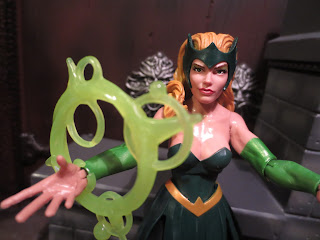 Marvel collectors have wanted Enchantress to be releases in the Marvel Legends line for quite some time. Alas, Hasbro has answered their cries and we now have a 6 inch scaled version of one of Thor's main foes: The sorceress Amora, also know as the Enchantress! (Unfortunately, nobody has yet announced a DC Comics Enchantress, and thus our Suicide Squad movie roster is incomplete!) Actually, Hasbro has released two version of the Enchantress this year: This version from the Doctor Strange themed series and a version that came with the SDCC 2016 "The Raft" exclusive set. If you didn't pick up that six figure set and just wanted one Enchantress you're in luck, as I believe the only real differences in this set are some very minor paint differences. Considering that you can pick this figure up for as low as $16 bucks (that's how much my Amazon preorder was) she should make a lot of people happy. Yeah, she's one of those weird Hasbro "non-variant variants" that feel like they really serve no purpose. Both Enchantress and Nico Mindru are sold as "Mystic Rivals" while a modern comic Doctor Strange and Brother Voodoo are sold as "Masters of Magic." Why not just call them by their actual names and save everyone the confusion? Let's just look at the toy before my sanity flies out the window! 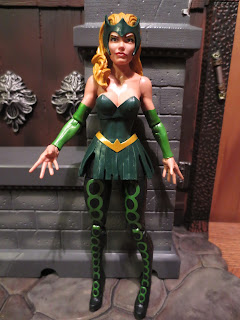 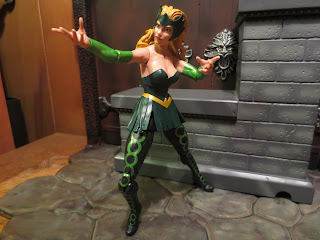 * Other than her new headsculpt and skirt piece, Enchantress is a repaint of 2014's Scarlet Witch. That's not really a bad thing, though, as Enchantress has the same solid articulation and build that Wanda Maximoff had. She's a solid, durable figure that looks nice on display but that you can play around with mindlessly and not worry about any breakage. 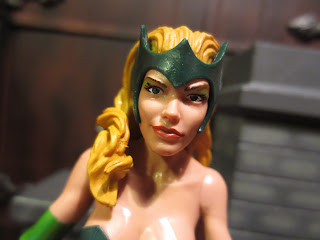 * I really like Enchantress' headsculpt. It's equal parts enchanting and devious. She kind of reminds me of Rebecca Romijn-Stamos, not that I'm implying that Ms. Romijn-Stamos is devious in any way. Although she did play the devious Mystique in the earlier X-Men films. Of course, so did Jennifer Lawrence, but I don't think she's devious either. Of course this headsculpt doesn't look like Jennifer Lawrence, but it's not supposed to. It's not supposed to look like Rebecca Romign-Stamos, either, but that's OK. Good work, Hasbro! 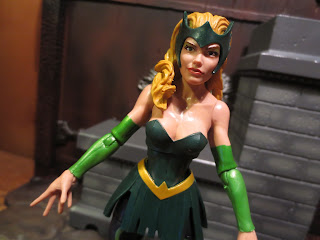 * The body used for Scarlet Witch works really well for Enchantress. The bodice mixes perfectly with the new skirt piece and the painted on arm wraps to really replicate her classic comic look. The paint work is nice and clean and I love the shades of green chosen here. Enchantress, while being a fairly simple figure, really does impress. 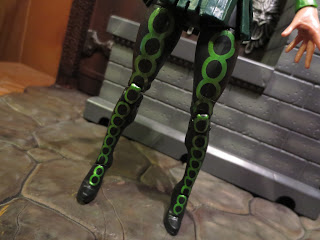 * These are some really cool leggings! I love the paintwork and design of these. It really gives Enchantress an element to her costume that visually "pops" and adds a pattern rather than all basic, flat colors. 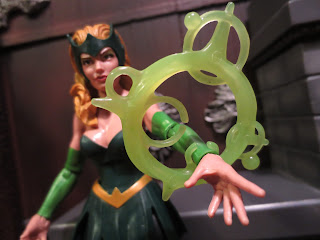 * Enchantress comes with the same magical effect pieces that Scarlet Witch and Doctor Strange came with, and I still like them. I love energy or magic effect pieces included with action features. There are two separate clasps on these that can fit on the character's wrist, hand, or upper arms. They're a much brighter greenish-yellow in person (like a melted green freeze pop) and go well with the figure's color scheme. 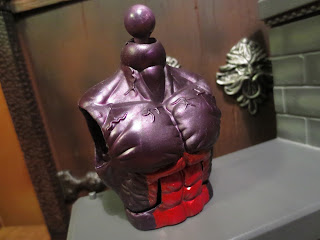 * This Doctor Strange inspired series features a build-a-figure of Dormammu, a character who apparently has a long and storied history but that I had never heard of before learning about this series. I'm always a fan of build-a-figures, even if I'm not planning on building them (which I'm not with Dormammu). I'll happily trade this to anyone who is planning to, though! Any takers? 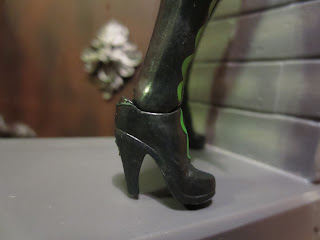 * While Enchantress has great articulation, she really has a difficult time standing thanks to the high heeled boots she's wearing. The base of the heel is pretty thin and unless you find the absolute perfect center of balance, Enchantress will be tipping over. 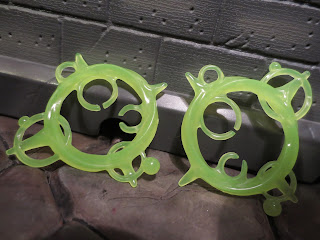 * Back to these things. I like them, but I do wish they were molded in a slightly more flexible plastic. The smaller clasps that fit on Enchantress' wrists are already starting to show stress marks in the plastic. There's no other way to get these on the figure other than by bending those little tabs. That's breakage waiting to happen, folks. By the way, wouldn't these things make a cool set of earrings? 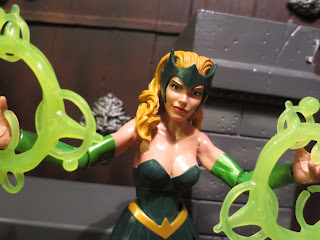 I really like this figure. I am a bit annoyed by the difficulty she has with standing but, all things considered, that's easily rectified by using a Kaiser stand or the equivalent. The paintwork and colors are excellent on this figure and I love the headsculpt! Enchantress has been long requested and it's great to see fans finally get the chance to add her to their shelves. She's a Great figure and well worth picking up if you can find her.

I haven't reviewed any other Enchantress figures but I have reviewed plenty of Marvel Legends figures from the past few years, including: