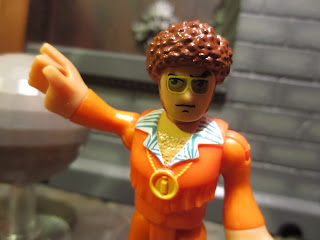 Let's face it. Even those of us born after the disco era usually go through a "disco phase" in our lives. Mine was between mid 1997 and late 1998. For some reason, possibly the release of "Pure Disco" and the constant barrage of advertisements for said album on Nick at Night, I gravitated towards this upbeat style of music and dress when I was in 7th grade and hung on to it for a few years. While I never went through the "disco sucks" phase, I can tell you that I don't listen to disco that much these days. Of course, if the Bee Gees come on the radio all bets are off. To pay tribute to this, it's really funny that Fisher-Price added the Disco Guy to the Imaginext line of Collectible Figures. Series 7 has a great variety of concepts (although sadly no female figures) and this is definitely one of the more unusual ones. Let's head out to the floor and shake our groove things with the Disco Guy, shall we? 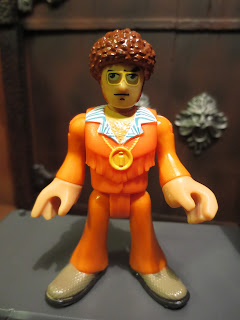 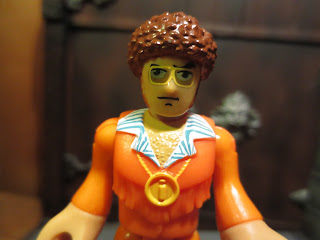 * Check out this disco stud. He's just glorious, isn't he? That hair. Those sideburns! The glasses! The expression! The collar! The little Imaginext "i" logo as his disco daddy medallion (I'm not sure what those things are really called)! This guy is just the ultimate disco dancing dude. Whether you're wanting him to give Disco Stu a run for his money or have him pal around with the KVWN Channel 4 news team, the Disco Man helps you to make that happen. 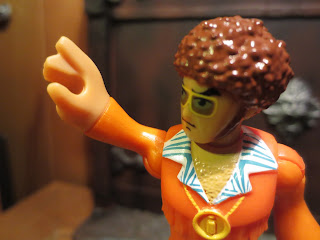 * The Disco Guy has a more prominent pointer finger than many other Imaginext figures. Is this because he's doing the Point Move, AKA the Travolta? I like to think so. 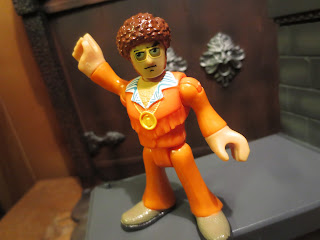 * As always, I'm with the quality and the articulation on these little guys. While they're only about 2 7/8ths inches, they remind me a lot of some of the various toylines of the 1980s and 1990s due to the random character selection, the durability, and the accessories. 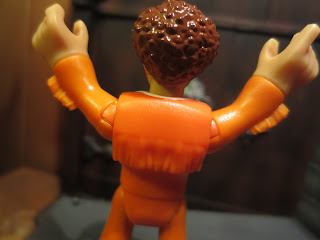 * Check out the bag of the Disco Guy's jacket! Who doesn't love tassels? While they're typically only worn by midnight cowboys and professional wrestlers, they look awesome on this bright orange disco suit. Imagine if Lloyd Christmas' bright orange suit became even more gaudy and flamboyant. This is what you'd end up with. And it's glorious! 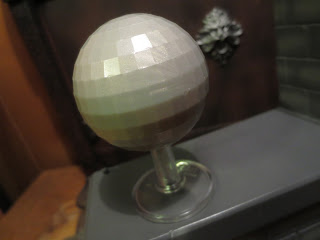 * The Disco Guy includes a huge accessory that not only fits the character but helps to easily identify him in the blind bagged packaging: An enormous disco ball. The disco ball has a great sculpt that makes it look like it's actually paneled. It also includes a stand so it can float above the dance floor. Set up Imaginext dance parties or pretend this is one of the orbs from Phantasm! The choice is yours! 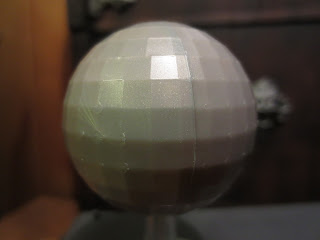 
* You know what would have been incredible? If the disco ball had been cast in a glittery or pearlescent plastic. As it is, it kind of looks like the Death Star. 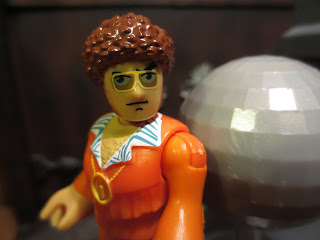 While it's a smaller series with only 6 figures in it, series 7 has turned out to be one of my favorites. It'll be a few weeks before I review all of the figures (because some are now scheduled into the 31 Days of Toy Terror countdown) but trust me when I saw that, other than the Alien, all of these guys have really impressed me. The Disco Guy might be the best straight up figure without any kind of overlay or extra outfit in the set. He's really cool, as you'd expect him to be, and he's a Great Imaginext guy. He's also easy to distinguish in the package thanks to the massive disco ball. While this figure might not change the world, he does help keep the love of disco alive so long as he grooves on your shelf.


I've reviewed quite a few Imaginext figures on here, including: