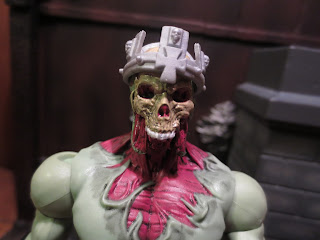 If you ask me, one of the clear winners of Halloween 2016 is Mattel's WWE Zombies toyline. Who would have imagined that the combination of WWE Superstars and zombies would have worked so well? It's not that often that we get 6-7 inch zombie action figures at general retail and I've went wild on this line. I haven't bought everyone yet but I've certainly picked up over half of them. Today I'm looking at the undead version of the Game himself, Triple H! Rather than just create a zombie version of Triple H, Mattel really went all out and embraced the fantasy and skull influenced looks Triple H has sported on a number of occasions. Pretty cool to have a brain eating version of the Cerebral Assassin, don't you think? Join me after the break as we check this guy our for today's installment of 31 Days of Toy Terror Lives! 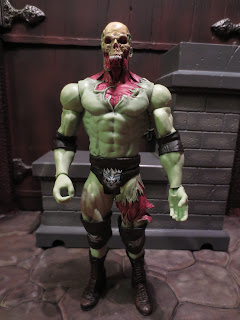 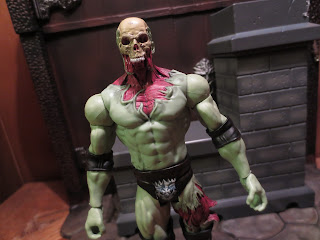 * I absolutely just love the design of these figures. I'm really glad that Mattel went with making these zombies actually kind of scary rather than silly or overly caricatured. I also love the skin tones. The greenish skin tone on Hunter is excellent and just works for a zombie. It makes these figures stand out without feeling overly toy-like or kid friendly. 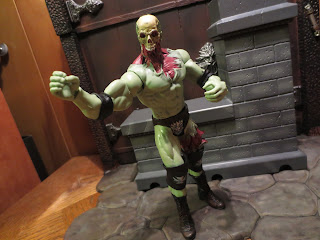 * Most of the WWE Zombies are built just like the basic series figures which isn't a bad thing. For the price you're getting a pretty decent action figure. These guys are durable and really fun to play with, even if they are missing the more articulated legs of the Elite figures. For a zombie figure, I doubt you'll miss things much. 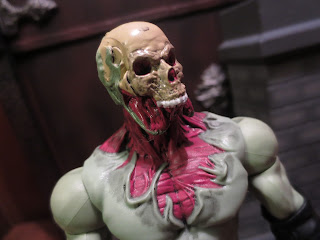 * This headsculpt is... it's amazing! Oh my gosh! The skull! That skill is incredible! And the bits of loose flesh and broken jaw pieces? And the flesh ripped from his neck revealing his muscles? This guy is incredible. Frigging incredible! What's funny is that while Triple H has a very prominent nose, zombie Triple H has no nose at all. 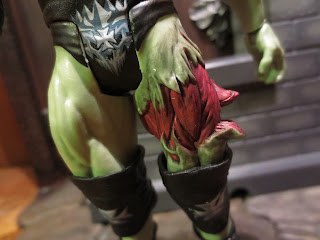 * Check out the tear on the flesh on Triple H's leg! Yikes! I love how gruesome these figures can be. Mattel really didn't pull to many punched with these, did they? That paint work is excellent with a variety of colors used to help the grotesque detailing stand out! 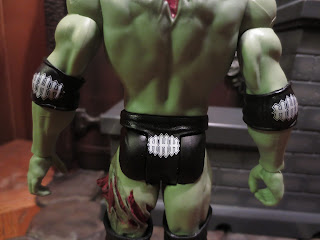 * Turn Hunter HEARSE Helmsley (wouldn't it be cool if the packaging called him that?) around and you can not only see the HHHs on his elbow pads and trunks but but also more of the rips and tears on the back of his right thigh. The printing is really neat and clean and looks awesome. 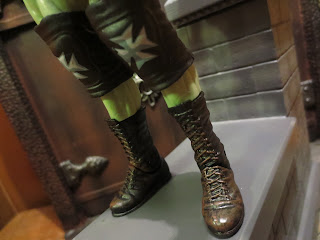 * First, check out the cool kneepads. They're separate pieces that "float" over the figure's knees. Second, check out the mud stains on the boots. Mattel has really put some nice paint applications on these figures. We don't usually see too many paint applications of this sort on WWE figures so these zombies give the Mattel team responsible for the line a better chance to show off their skills. 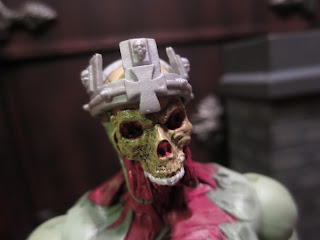 * I'm really impressed that these figures have accessories and Triple H's is one of the coolest: His skull adorned crown with an iron cross on the front. It's a cool accessory and really gives the figure a different look. I'm not sure whether I like the figure better with or without it but I'm glad it's included nonetheless. 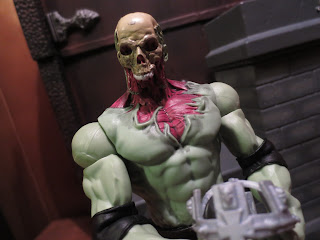 As the end of the year is quickly approaching I think I can say with certainty that WWE Zombies will be on my list as one of the best lines of 2016. Triple H is another example of what makes this series so strong: Awesome sculpting, great paintwork, and a cool take on the WWE Superstars. This guy just completely wins me over and I'm giving him an Epic. He is without a doubt one of the best $13 dollar action figures on the market.

If you're looking for another figure of Triple H, I reviewed the Series 35 Elite figure, too!