31 Days of Toy Terror Lives: The Wolfman Monster from The Real Ghostbusters: Monsters by Kenner 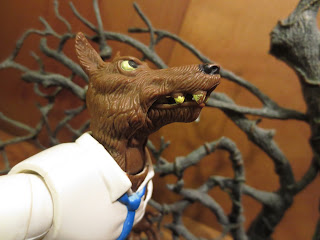 Ever since me and my daughter watched the recent Goosebumps movie, wolves and werewolves have been massively popular in our house. Unfortunately, there aren't many werewolf movies that are appropriate for a child (the only other movies containing werewolves we have watched together have been Alvin and the Chipmunks Meet the Wolfman, the 1941 film The Wolf Man, Mad Monster Party, and The Nightmare Before Christmas) so werewolf toys are always a hot commodity. My daughter loves this toy and I couldn't be more thrilled: I loved this toy as a kid, too! The Wolfman Monster is easily my favorite figure in the Monsters subset of The Real Ghostbusters line. He just fits in so well! Let's take a closer look at this guy after the break... 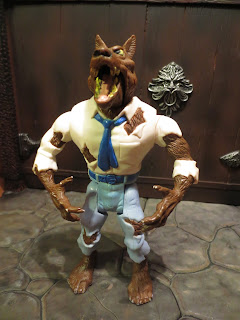 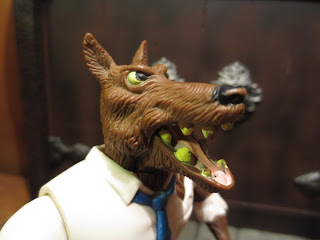 * Remember that this figure was part of a used lot of figures I picked up off of Ebay for a really good price, so the paint wear happened long before I ever got my hands on these. That being said, this is one of the best werewolf sculpts ever! I love it! I love the long nose, the yellow teeth and eyes, and the pointy ears. Just perfect work here, particularly on the hair. 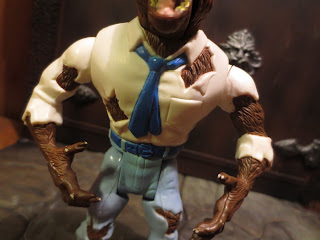 * One of the things in my mind that separates a werewolf from a wolfman is the presence of clothing. This Wolfman is still decked out in the normal duds he was wearing prior to his transformation which include some blue dress slacks, a white dress shirt (with a breast pocket), and a blue necktie. I love the ripping and tearing effect on the clothes! It's really well done, as are the wolf's hands. Hey, considering the outfit, wouldn't it be funny if this was actually Louis Tully? 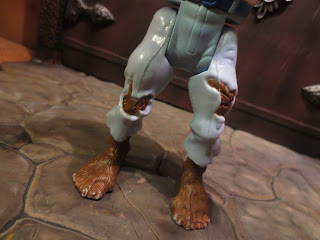 * The Wolfman's pants are ripped up, too, as are his shoes. Well, his shoes are completely gone; all that's left are his huge, hairy feet. Err.. paws. Huge, hairy paws. 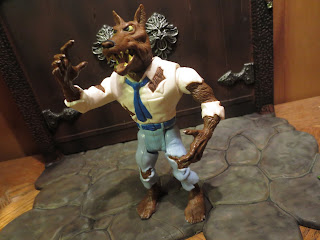 * The Woflman isn't a bad action figure, either. While he has a built in action feature, his arms and hips still swivel freely. He's really fun to play with and holds up well. I've let my little one run around with him all she wants over the past few weeks and he's still in fine shape. This toy is almost 30 years old and it's still holding it's own nicely. You gotta respect that. 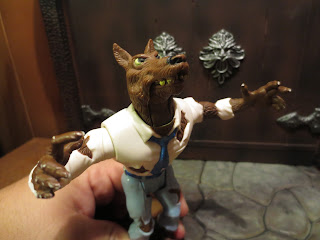 * The Wolfman does have an action feature like the other figures in this series. Squeeze his legs together and his arms spread out, his head tilts back, and his jaw closes shut. Yup, this guy actually howls at the moon. How cool is that? Also, you can see my hand in this picture! Hi everybody! 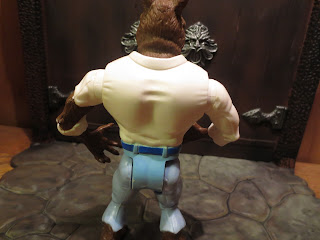 * The only negative I have with this guy is that the back of the figure doesn't have that much detail. It'd be really cool if the ripping and tearing of his clothes extended to his back but it doesn't: There is only a bid of mild stretching going on back there. 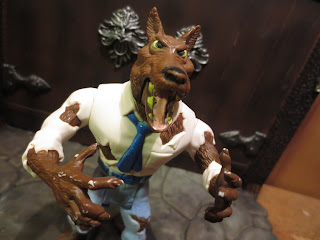 I've always loved this figure and now, over 25 years later, I still do. He's just incredible and so much fun to play with. I love the idea of the Ghostbusters going up against a wolfman, particularly if it's Louis Tully. That would be hilarious, wouldn't it? The poor guy always getting turned into dogs, lycanthropes, and what not? This is an Epic toy and one of the best monsters Kenner put out in the line. He's cheap to pick up so if you don't own one and collect Werewolf related memorabilia, snap him up.


Keep checking back here every day in October for more Toy Terror! Also, make sure to check out the Toy Bloggers United contest being hosted here this month! For more 31 Days of Toy Terror, check out my Hokey Halloween Horror page for spooky fun from 2016 and years past!
Posted by Barbecue17 at 10/18/2016