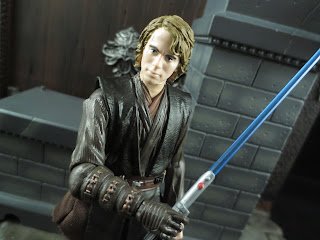 Since my little one is getting into Star Wars pretty heavily, we've been watching through Rebels and all of the films. Well, all except Revenge of the Sith. It has some pretty intense moments in it that she's ready to process yet. While Hayden Christensen's acting in Episode II has become the stuff of legend, I really think he did a great job in Episode III. Honestly, watch The Clone Wars and then pop in Episode III and I think you'll be more pleased with what Christensen did with the character. I still get chills when he yells "I hate you!" at Obi-Wan. Of course, this review isn't really about Episode III or Hayden Christensen's acting: It's about an Anakin Skywalker action figure from Star Wars: The Black Series by Hasbro. While the Phase I Revenge of the Sith Obi-Wan Kenobi turned out to be a massive pegwarmer (my local Walgreens still has three on the pegs), Anakin was a figure that few collectors even found on shelves. At this point he's one of the most expensive figures on the aftermarket, so I was fortunate to pick him up in a trade. Is he a worthwhile purchase for those of you wanting to go back and pay the big bucks for this guy? Read on and find out after the break... 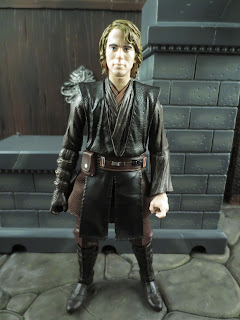 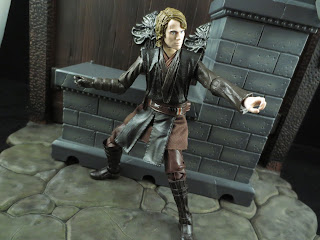 * Since he's a Jedi, Anakin needs to be able to move freely and unhindered. Fortunately, he's able to with ease! Hasbro did an excellent job on Anakin's articulation as his joints are tight and sturdy with an excellent range of motion. The "skirt" of his tunic also doesn't hinder his motion in the least because Hasbro wisely mixed together a rubbery plastic and actual fabric to create the effect. 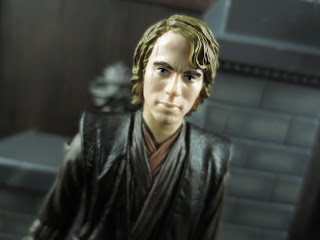 * Hey! I really like this Anakin headsculpt. He's not in full on "youngling slaughtering mode" yet but he does have a bit of an intense gaze. This is definitely a headsculpt that if you handed it to me sans body, I'd know immediately who it was. 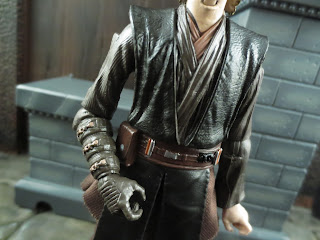 * Here's a glimpse at Anakin's torso. It looks really good, too. I'm digging the work on his padded glove and the paintwork on the tunic. It actually looks like it's made from a leathery like material due to the excellent sculpting and paint. 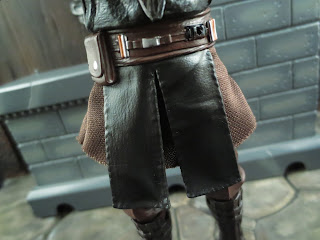 * Here's a closer look at the bottom of Anakin's tunic that I mentioned above. As you can see, the mixture of soft goods and a softer, more rubbery plastic works really well here. Sometimes these mixtures work and sometimes they don't, and fortunately Anakin's is the former. The belt is also pretty detailed and features a hole where his lightsaber can be plugged in. 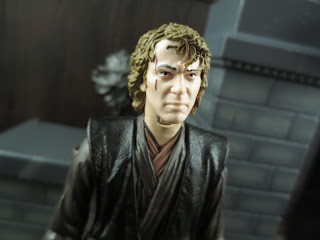 * If you prefer your Anakin to be less angst ridden and brooding and more " I want to slaughter younglings" then you'll prefer this second headsculpt. Not only does Anakin have the Sith eyes going on but he looks much more pissed and his hair was all sweaty. He claims it's just because he was watching COPS but it's probably due to his battle with Obi-Wan on Mustafar. Anyways, it looks pretty good and swaps out easily. I wish more figures in the Black series had alternate heads! So far the only ones that have had this feature are Darth Maul and Anakin. his feature needs to be used more often! 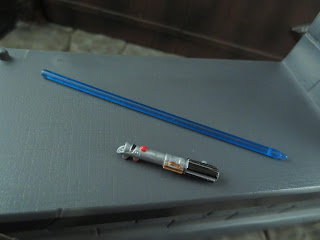 * Anakin comes equipped with his second lightsaber, which is the one that Obi-Wan took from him after their duel on Mustafar and that he later gave to Luke. Of course, Luke lost it on Bespin and it ended up, somehow, in the possession of Maz Kanata. Finn held on to it for a little while, too, before Rey claims it. Although she tries to pass it back to Luke. I guess I'm saying that this is that famous lightsaber and, like your mom, it gets around.

Oh, and Han Solo used it briefly once, too. 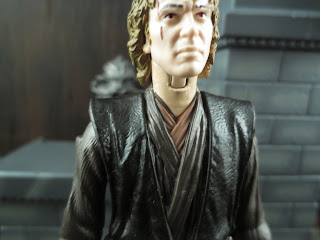 * I like the functionality of the neck hinge that Hasbro used on these earlier figures in the series but I hate that the hinges are so visible. The newer figures rarely have this problem, but they also don't have easily removable heads.

* I complained about this same issue with Obi-Wan a few years back, but where is Anakin's robe? How can Hasbro sell a figure of a prequel era Jedi with no robe? That's ridiculous! 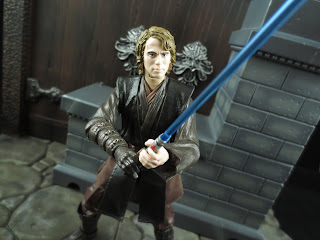 My only real complaint with this figure is the lack of a Jedi robe, which is just one of those odd things that Hasbro does which keeps this line from being a amazing as it possibly could be. Overall, though, Anakin is great. He's actually one of the best figures in the entire line. It's a shame that he was so difficult to find as he's a pretty good example of this line's potential. While the price has skyrocketed on this guy (unless you can work out a good trade, the going rate seems to be around $70-$100 dollars) he's such a prominent figure that you'll definitely miss having him. He's a Great and a 1/2 figure but just make sure you shop around for him first. Hopefully we'll get another Anakin down the road. I'd love a Clone Wars Anakin, Episode II Anakin, and even an Episode 1 Anakin. Imagine little Ani with his backpack, podracing helmet, and a Naboo pilot's helmet? I'd still buy it, and you know you would too!