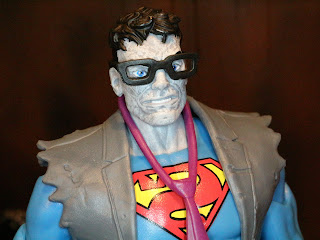 Me is Bizarro Barbecue17. Me not like DC Comics action figures. Me hate Batgirl, Masters of the Universe, and carbonated water. Me not find new Bizarro figure at Walgreens last week. This not a short review of Bizarro from Mattel's DC Comics Multiverse line....

OK, sorry, I can't keep that up that long! Yes, this is the DC Comics Multiverse Bizarro that is exclusive to Walgreens. I found it a week or so ago on a quick trip there while picking up some Chinese food next door and boy did it pay off! New DC Comics Multiverse figures have been hard to come by and Bizarro has been what I've really been looking for. He's a great classic version of the character and it's been well over a decade since Mattel last gave him a new sculpt (although his last repack release was in the MOTUC vs DCUC Faker vs.Bizarro set). This guy came at a great time as just a few weeks ago my daughter brought home one of the kids DC storybooks from school and it was a Superman and Bizarro story, so she's been really interested in Bizarro lately. This one was a hit! Let's check him our after the break... 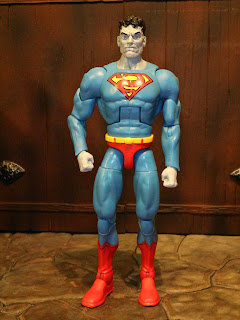 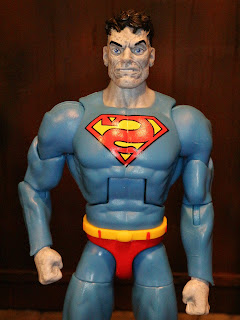 * Bizarro turned out really, really, well, although you may not be able to tell that from the package: Bizarro is packaged backwards in the tray, so only his back is showing! The figure itself looks great, though. While he's built using a smaller body than previous incarnations, it works well for a more classic styled Bizarro. He's very much based off of last year's Rebirth Superman, although I think fans would go nuts for a Superman with this color scheme. Notice that his belt is new and very much a classic Superman belt. The backwards "S" logo is fantastic, too, with a very clean stamp. 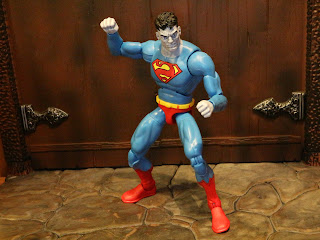 * Bizarro's articulation is pretty solid and is definitely improved over most other Mattel DC figures due to the presence of double-hinged knees. The shoulders and head also have a really nice range of motion. 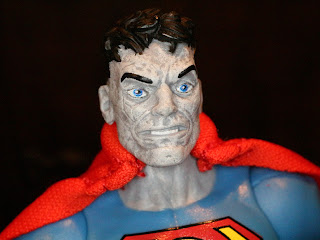 * I love the headsculpt. It's a great Bizarro likeness and I like that it's not just angry looking. It definitely captures elements of Superman's look, but still has he added Bizarro charm. This feels like a really cool depiction of a more benign and less evil Bizarro. 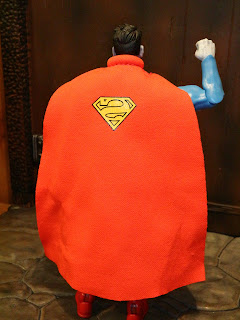 * Bizarro comes with one of the soft goods "Super Powers" styled capes. Bizarro's cape of course features the backwards "S" logo on it, which is very neatly applied. Personally, though the neck clip is dated, I love these sort of capes. 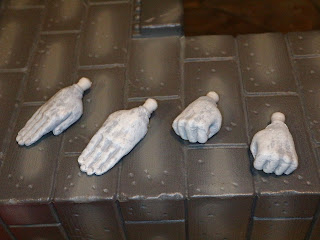 * Bizarro comes with the same four hands the Rebirth Superman came with: Two for flying and two for punching! They swap easily and capture Bizarro's mottled grey skin quite nicely. 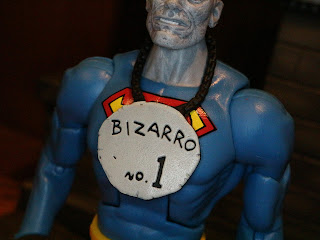 * Bizarro is also rocking his signature Bizarro No. 1 necklace, an award winning piece of jewelry from the Bizarro collection. It easily fits over his neck and looks pretty cool on the figure. 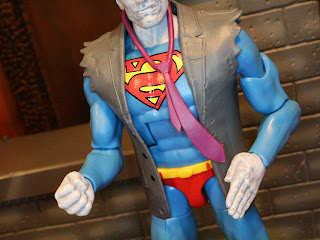 * To put Bizarro in "disguise" he also comes sporting a torn jacket and a loose hanging tie, perfect for when you want to disguise him as El Kal (or when you want B'wana Beast to show off his Magic Mike routine). The outfit fits really well and it's just so wonderfully bizarre that you can't help but love it. 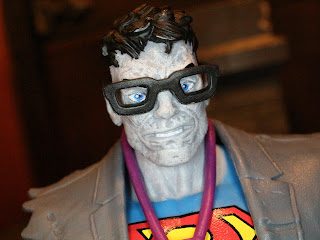 * Bizarro even comes with some glasses! They fit on his head really well. While they're oversized, they just add to the charm of this figure. I love them! They actually look really cool on the figure, although cool in the dopiest way possible. Have fun adamantly denying that this is a Bizarro figure to friends and family! 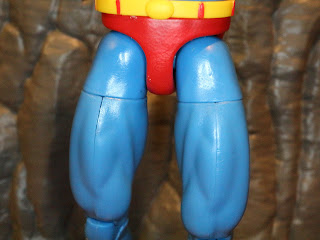 
* Like with Superman, I don't like the look of this waist piece. It makes the upper thighs look really strange and far too small. It's just... odd. 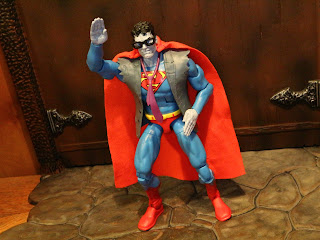 You know what? This figure is pretty darn good. He's fun, durable, and comes with a bunch of accessories allowing you to have two different looks for the figure. This is actually one of the best Multiverse Mattel is put out and it's really and to see them starting to put out product of this quality now that we know they're losing the license next year. Last year had some good releases, but they were too few. Had Mattel put out figures this packed with extras last year who knows what might have transpired? This is an Epic figure and well worth tracking down at Walgreens.