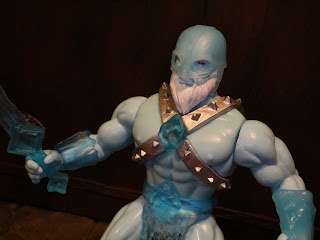 Last month I reviewed the Ice Mode version of Mister Freeze that was given out free at NYCC 2018. I really liked that guy so today I'm checking out the normal version of Mister Freeze from Funko's DC Primal Age line. Like the rest of the figures in the series, the early shipments released through Amazon in 2018 were prone to breakage so Funko completely released a second run of these through Target in January. These seem to be selling well as the classic DC Comics characters blend together quite well with the 1980s barbarian fantasy style of the classic Masters of the Universe toyline. Let's check out Mister Freeze after the break... 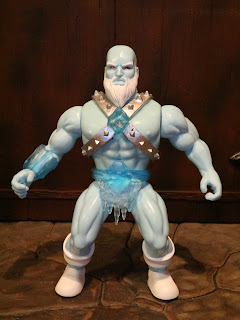 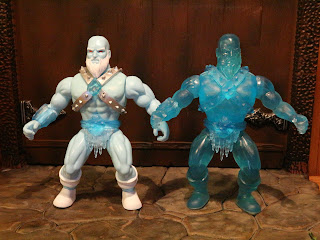 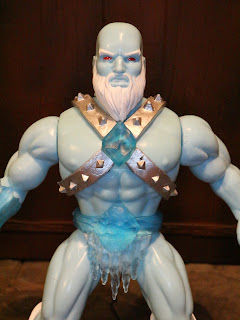 * If you've ever played with a vintage Masters of the Universe figure, you have a good idea what you're going to get here: Muscles, a loincloth, and funky armor. To redesign Mister Freeze to fit into the barbarian fantasy world of DC Primal Age, he's been given a translucent blue body, a spiked harness, and a loincloth that looks like icicles. I really like the style of these figures and this version of Freeze really fits the character well, helping him to really stand out. The light blue and silver paint work looks nice and matches Freeze's classic colors quite well. The translucent blue ice gem on the harness looks really, really cool. 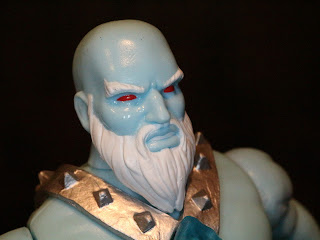 * The headsculpt is easier to see on this figure than on the Ice Mode version due to the paint. I dig the red eyes. And, yeah, it still looks like Cal from Cal from Calvin's Canadian Cave of Cool! That beard is definitely fierce, isn't it? The white beard and eyebrows are very, very sinister. 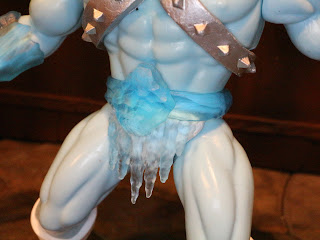 * I like the ice loincloth. It would be really uncomfortable for anyone other than Mister Freeze but this guy wears it well. This detail is tough to fully appreciate on the Ice Mode figure but the painted version makes it much more noticeable since the translucent blue stands out so well. 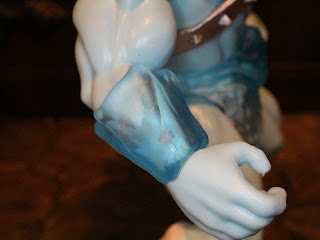 * You also wouldn't notice this ice cuff on the Ice Mode figure, either. It's clearly a separate part of the sculpt, though, and looks really wicked cool. Imagine being able to generate ice armor on the fly? Maybe that'll pop up as one of Elsa's abilities in Frozen 2, huh? 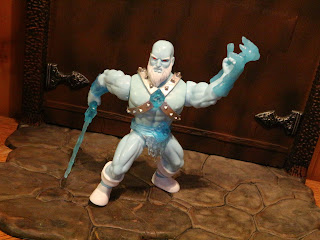 * Mister Freeze is definitely built quite similar to a Masters of the Universe figure or any other similar barbarian fantasy figure from the 1980s although his hip joints are more traditional ball joints rather than the rubber banded legs of the vintage MOTU figures. I know the Amazon releases of the DC Primal Age figures had some extremely widespread breakage issues with the hips but the Target releases from 2019 seem quite sturdy. 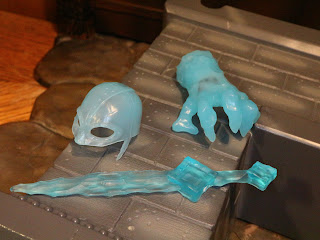 * This version of Mister Freeze comes with the same accessories as the Ice Mode figure: A helmet, an ice sword, and an ice claw that fits over his left hand. 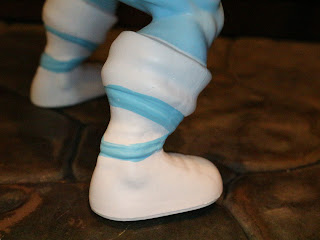 * The boots are really underdetailed with below average paintwork. You can see lots of slop even with this minimal amount of detail. 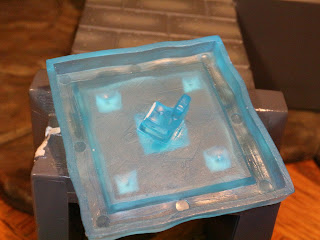 * Pretty much out of the package the clip on Mister Freeze's ice shield snapped. You might remember that this happened with my Green Lantern figure as well, so it seems to be something that affects the translucent accessories. Hopefully anything translucent from series 2 is far less brittle. 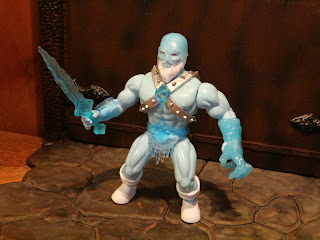 Despite the breakage issue with the shield, I still really, really like this figure. While he doesn't have the Coin of Protection that the Ice Mode Mister Freeze has, the paint applications on the figure do give him a bit more personality. Mister Freeze is one of my favorite characters from this series, particularly due to his cool ice details and his nice assortment of accessories. Be careful with his shield (maybe just don't even use it) and you should be in good shape. He's a Great and a 1/2 figure and a lot of fun, even if he's got a flaw or two. I'm really curious to see more characters in this series so here's hoping we hear about a series 3 at some point.