Action Figure Review: Werewolf Biker from The Worst by Super7 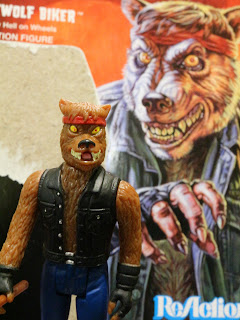 I feel like you couldn't even begin to enjoy this review unless you imagine Werewolf Biker being in a sleazy grindhouse styled trailer with the old fashioned movie trailer narration. Because that's exactly the vibe I get from this figure: Werewolf Biker is a vicious, brutal, bad guy that audiences root for despite him being Hairy Hell on Wheels. I like to believe that in some alternate reality there is an Earth where Werewolf Biker was a long running series of over the top 70s and 80s films that have now became legendary as cult classics. In the (early) 1990s there was even a revival TV show on USA and an attempt at a kids cartoon called Werewolf Riders. You just gotta look at this figure from Super7's The Worst line and the infinite possibilities start to flow through your mind...

* Nobody can accuse Super7 of false advertising as this figure is exactly what you expect: A werewolf who is also a biker. He's got brown furry fur, just like a werewolf, and traditional biker clothes. Decked out in leather boots, tight jeans, and a leather the Werewolf Biker is either ready to raise some hell or join a Village People reunion. In fact, I like to imagine that both of those things happened in Werewolf Biker 4: San Francisco Savage!

* The fingerless leather gloves complete the look perfectly, offering you a figure that is 50% Werewolf, 50% Biker, and & 100% red blooded American. That actually comes from the Reagan era fan favorite installment Werewolf Biker 6: Full Moon Over Moscow. 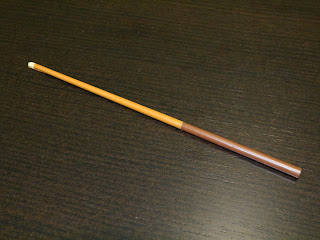 * Werewolf Biker includes the pool cue that he carried in the sequel to the original film, Werewolf Biker 2: A Fistful of Fur. The pool cue was used in three iconic scenes: Werewolf Biker's street fight with the Japanese Vampire Yakuza gang, the scene where Werewolf Biker tosses it like a javelin at the gasoline factory, causing a huge explosion, and when he wins the international pool tournament to save the Brooklyn Orphanage.

* The packaging uses the original art that Ed Repka, a prominent illustrator of album covers, created for the original film. I've always had this poster on my room ever since seeing the films on bootleg Betamax tapes in middle school and seeing it on an action figure cardback is just magical. 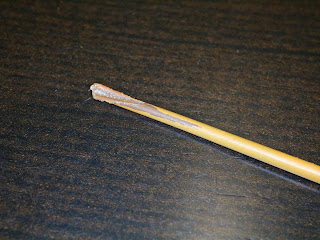 * The only negative is that Super7 went too specific with this accessory. I think they were trying to capture a scene from the episode of Alf where the Werewolf Biker guest starred. In the scene the Werewolf Biker discovers that a cat has been chewing on his pool cue, to which Alf comments: "Maybe it's interested in a second life as a shishikab."

Personally, I'm thrilled to finally have Werewolf Biker on my shelf. With the reboot coming out next year and the spin-off She-Wolf Biker, it seems like now is the perfect time to start capturing the fan base. I'm sure this will be a hot commodity at this year's Lupo-con, the annual gathering of Werewolf Biker fans. Super7 did a great job of adding the Werewolf Biker into The Worst! I mean, even though he wavers back and forth between being a full-out villain and an antihero, how can you not love this guy?  He's Great!


This is the first Werewolf Biker figure I've ever reviewed. For more figures from The Worst, check out the following: