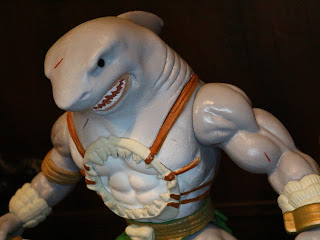 I've been slowly working my way through the DC Primal Age toyline and today I'm checking out another one of the series' villains: King Shark. King Shark is a pretty cool addition to the line and provides a nice counterpart to Aquaman in the line. While DC Primal Age has the usual complement of Batman foes and A-list DC villains like Bizarro and Lex Luthor (coming in series 2), King Shark is a nice lower tier villain to add some flavor to the line. A giant, savage shark man fits in perfectly with the barbarian fantasy aesthetic of the line, doesn't it? Let's check this guy out after the break... 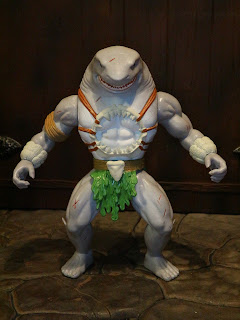 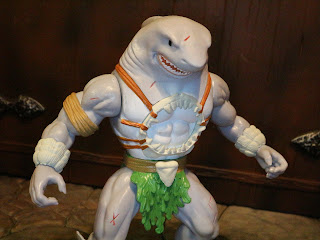 * King Shark is an excellent figure and features a sculpt that definitely features the detail you might expect on a toy from the 1990s or early 2000s rather than the 1980s, although he still fits in well with other 1980s 5.5 inch barbarian fantasy lines. I love the design on this guy, particularly all of the ornamentation and the various scars all over his body. 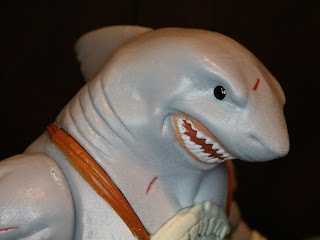 * The headsculpt is pretty cool, too. King Shark doesn't have a separate head like most other figures but instead has his head molded as part of his body. The details such as the gills, the fin on his back, and the teeth are quite well done. I love the teeth. They're pretty small but painted rather neatly for the size. 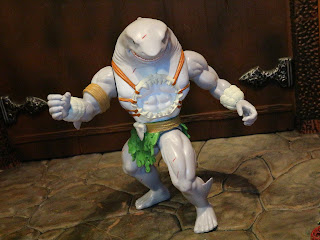 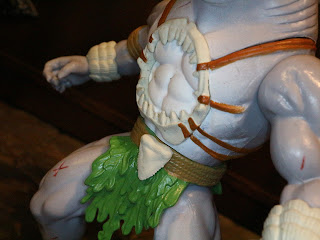 * King Shark has a set of shark jaws on his chest serving as some light (and possibly entirely ineffective) armor and a loincloth made out of seaweed or kelp or something. Again, great detail here with a rather nice, neat paint job. 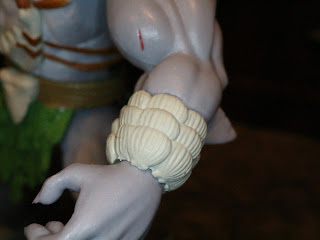 * I'm also a huge fan of these seashell bracers! How crazy cool, right? How would one even go about making something like this? 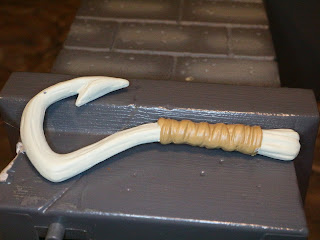 * King Shark has a really cool hook like weapon, similar to Aquaman's hook hand. It has a few nice paint applications and looks really cool being wielded by King Shark in battle. 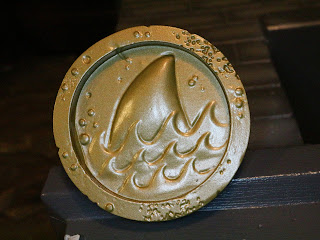 * Last, but not least, is King Shark's shield. It's molded in a bronze colored plastic and features a great relief of a shark fin jutting up through some ocean waves. There are also various marks and dents all over. Did King Shark decide to gnaw on this at some point? Cosmetic damage aside, this is one of the coolest shields in the line. I dig it. 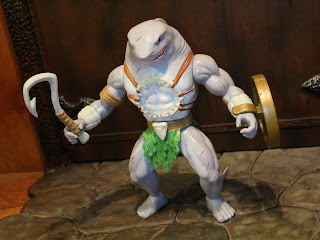 Being a giant shark man with Masters of the Universe styled proportions, a loincloth made of seaweed, and a shield with the Jaws poster on it, King Shark definitely is an Epic figure from the DC Primal Age line. While most of the figures in series 1 and 2 are A-list or high B-list characters, King Shark adds a bit more variety to the line that's very welcome. I'm hopeful we'll here about a third series soon as we desperately need some more females in the line and I've love to see some more magic based characters such as Etrigan and Dr. Fate and perhaps even Darkseid as a larger figure, perhaps similar to the vintage MOTU giants.