Action Figure Review: He-Man from Masters of the Universe Ultimates by Super7 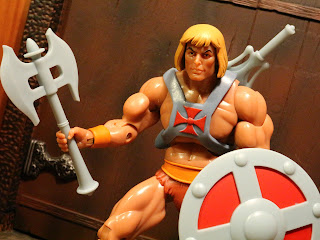 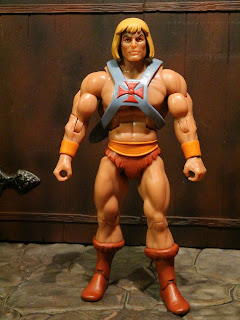 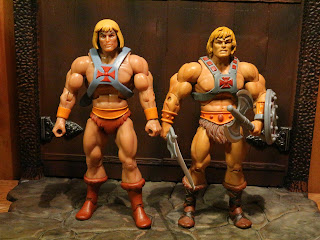 * On the left is the Ultimate Filmation styled He-Man while the Mattel Masters of the Universe Classics styled He-Man (second release) is on the right. It's a good glimpse of how different these two lines are despite having so many similarities. I wasn't reviewing toys when I first started collecting these, so I don't have a link for you. I don't own Mattel's Club Grayskull He-Man, but this figure is really a version 2.0 of it. 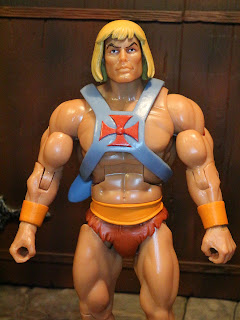 * While I'm not wild about the overly simple Filmation design when it finds its way into MOTUC, when it comes to the straight up inspired Filmation line I'm down with the cartoon like design. As you can see, the details like He-Man's bracers, harness, and belt are smooth and symmetrical, just as they were in the often simple Filmation animation cels. The colors are quite nice as well and overall Super7 has done a nice job here making a very recognizable action figure. 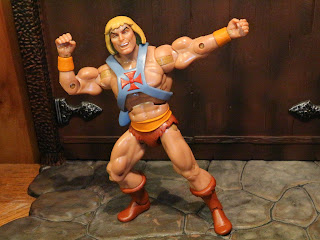 * The articulation is strong. Super7 has continued to add new joints such as the improved ankles and the swivel/hinged wrists. He feels quite nice and and is as fun to play with as you might expect a He-Man figure to be. 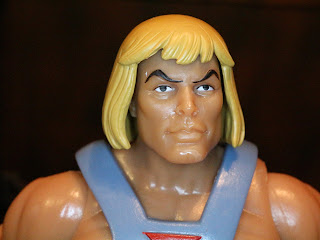 * The main draw of the figure (besides simply being a Filmation inspired He-Man) is the presence of four interchangeable heads. First up is the standard He-Man head. I'm going to address the waxy look of the plastic in a minute, but so far as the actual sculpt goes it looks great. This is clearly Filmation's He-Man and you can nearly hear John Irwin's iconic voice when you look at him. 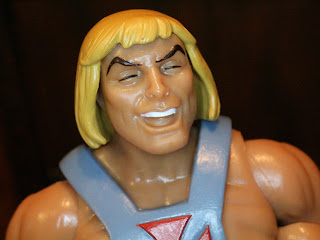 * The second head is a laughing He-Man portrait. It's reused from the exclusive laughing Prince Adam figure but it looks better here. The laughing Prince Adam was too tanned but this one fits He-Man just right. I'd actually like to see Super7 sell a set of laughing portraits for the rest of the main cast, possibly alongside an Orko or Cringer figure. That would be pretty sweet, huh? 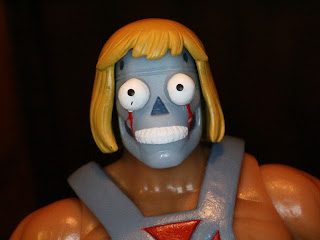 * The third headsculpt might be my favorite as it's so, so out there: It's the robot He-Man from the episode Disappearing Act. While Skeletor has Prince Adam captured, Man-At-Arms sends a robot He-Man to serve as a decoy. The sculpt is just offsetting but makes a great conversation piece. It kind of looks like one of the aliens from They Live, doesn't it? 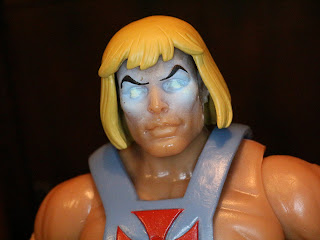 * The fourth head is the Filmation Faker head. Unlike the toy, Filmation's Faker was simply He-Man with glowing blue eyes and a different voice. Only appearing briefly in the episode The Shaping Staff (remember that the Shaping Staff was included with Entrapta back in 2014), the Filmation Faker is a pretty minor character but the head is a fun extra and it features glow in the dark eyes. Cool, huh? 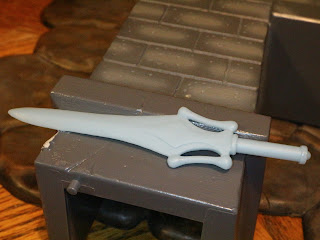 * He-Man includes all three of his classic weapons: The Power Sword, an ax, and a shield. The Filmation Power Sword looks pretty cool here. It's molded in a plastic that I wish were a bit more silver but does seem to match the look of the cartoon fairly well. It's a nice sculpt and the figure holds it well. 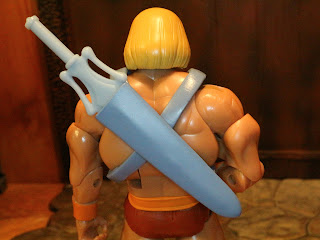 * He-Man's Power Sword fits inside the scabbard on his back quite well. Some fans have pointed out that the scabbard is on the incorrect side, which is true, but it often was shown on the opposite side as well. 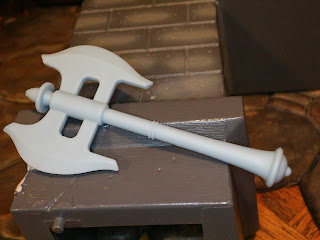 * He-Man comes with an ax but this one doesn't come from the cartoon: It's actually based on an early Mark Taylor sketch. I love this design, don't you? I do wish it were molded in darker plastic but it's still quite nice as it is. 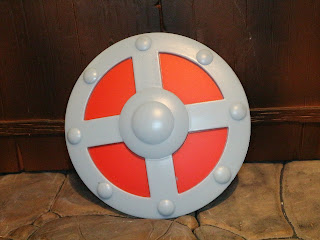 * To round out his complement of weapons He-Man comes with a shield. A very large shield. It's way larger than the standard MOTUC He-Man shield. The toy inspired shield only appeared in one episode of He-Man and the Masters of the Universe, but maybe that's where Super7 got the inspiration? I've also seen a few collectors point out the shield He-Man uses in this early Filmation commercial, so that's also a possible source of inspiration. 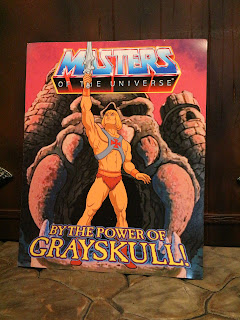 * Last, and least (but still cool) is this mini art print. On the back is the bio for the figure, printed as if it were written by Scrollos himself. While it's a simple paper accessory I really like the concept. I wish the entire MOTUC line had included the bios on collectible cars with artwork! While Super7 has their struggles they're great at making aesthetically pleasing packaging and pack in materials. 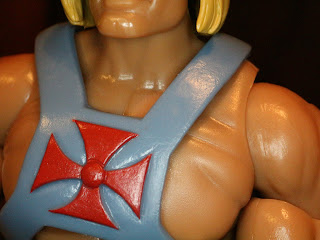 
* Why is He-Man's harness not removable and why is it thicker than the original figure? What's the deal? Had it been removable and thicker I could understand but since it isn't I wish the straps were thinner. They look rather bulky here. 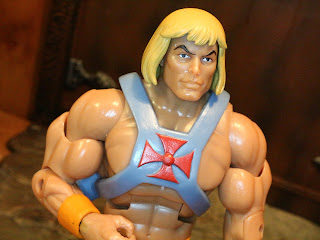 * The biggest complaint that most collectors seem to have about these figures is that the plastic looks "waxy" on them. I agree. While they do look better in person, the plastic is unpainted and thus just doesn't look as good as most of the MOTUC figures that were released previously. This might be a deal breaker for some folks but a more minor annoyance for others. If you can, try to see these in person if you're on the fence about them. 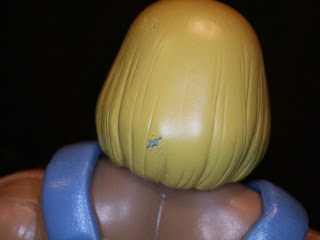 * My Faker head has a pretty noticeable scratch on the back, exposing the gray plastic underneath the hair. I'm pretty sure this isn't a "battle damage" feature but a simple quality control issue. 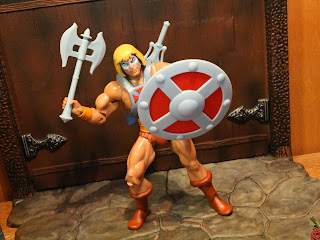 Considering that Super7 sold this set for $35 dollars originally (you'll have to pick them up on the aftermarket now) you're getting a lot of bang for your buck. If you like the style and can tolerate the shinier plastic used here, this is a pretty solid Filmation styled He-Man. It's not perfect but the amount of alternate heads do a great job of helping this figure feel like a worthy purchase. The Ultimate He-Man is a Great and a 1/2 figure and a really fun release. Heck, considering that you have the parts for three different characters (He-Man, Faker, and Robot He-Man) you could use these heads along with the previous Filmation He-Man and even the Holiday He-Man to further populate your shelf!


He-Man/ Prince Adam is one of my favorite characters and I've reviewed quite a few toys of him: The Series 3, Series 2 and Series 1 M.U.S.C.L.E. He-Man and Prince Adam minifigures, plus the Masters of the Universe Classics Galactic Protector He-Man, the future King He-Man, Laser Power He-Man, Snake Armor He-Man, and Flying Fists He-Man, the Super7 Prince Adam (Laughing) exclusive, the Mega Construx He-Man from the Battle for Eternia Collection, and the Funko VYNL Prince Adam + Cringer set.