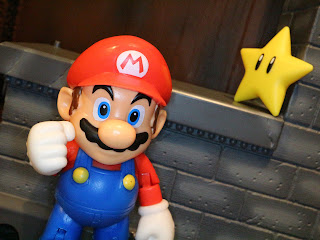 I don't remember if I mentioned it in my previous reviews from the new Jakks Pacific Super Mario figures but I actually preordered a whole set of series 1 figures. While these are technically a new line, the figures pretty much feel like a continuation of the long running World of Nintendo series. I'm not sure of the reason for the change in name (I'm assuming that overall Jakks just wasn't interested in releasing anything but Super Mario based figures) but I'm not overly concerned. While World of Nintendo relies heavily on repaints and reuse, series 1 of Super Mario features some straight up repacks. Basically, for ordering a complete set of series 1 figures I've ended up with some figures I didn't really need. Let's take Mario here: He's basically the same as the original 1-1 Mario and the 2-4 Mario. I was really hoping for a new Mario to kick off the new series, but that's not what we got. Let's take a quick look after the break... 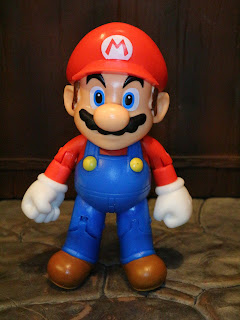 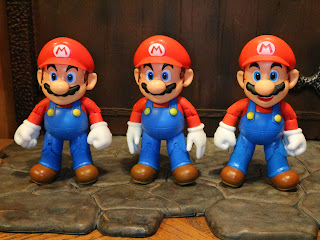 * On the left is the new Mario from Super Mario, the middle is the World of Nintendo 2-4 Mario, and on the right is the original 1-1 Mario.  As you can see, all of the figures have the exact same bodies with the new Mario having the fists from Mario 1-1 and the head from Mario 2-4. That's it. Nothing new. Check out those previous reviews as there isn't much I can say new about this figure. 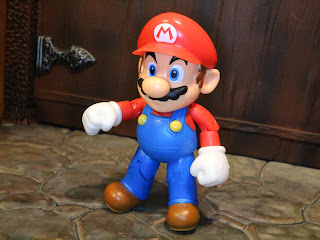 * This body has been around for over five years now and while that might seem a bit dated, the style and design of the World of Nintendo line and now Super Mario have remained pretty consistent. if you don't have a standard Mario than this is a pretty fun figure. If you already have both of the previous figures than there's really nothing new here. Still fun, decent paint, and a faithful sculpt capturing the Nintendo style. 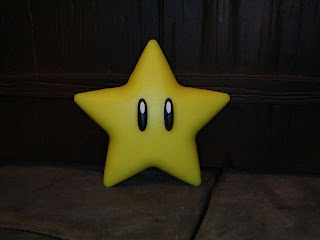 * I love how Jakks includes classic Mario powerups with the figures. While the Super Star has been included with two previous figures (both versions of Super Power Mario), I haven't reviewed either of those. The design is very nice and the paintwork on the eyes is perfect. 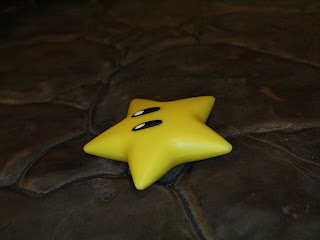 * Mario has the same positives and negatives as the previous figures, so check out those previous reviews for full details.

*The Super Star is cool but there is no way to really keep it standing. You can either lean it against something or just let it flop around. A clear stand would have been pretty cool, right? 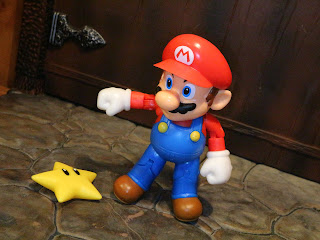 All in all, this is a pretty Eh 1/2 version of Mario. There is really nothing new here as the figure is just a mishmash of pieces from the two previous figures with a different (but not new) accessory. If you don't have Mario yet you should be reasonably happy with him but everyone else can ignore him. I wish I had but I have no idea how to purchase these figures without grabbing them by the case. GameStop carries these although they're pretty hit or miss as to what they get in. There are so many Super Mario Bros. characters I'd still love to see (Rosalina, Nabbit, Birdo, a Boomerang Bros, Princess Daisy for starters) and I'd love to see new figures rather than constant retreads.


I've reviewed quite a few Mario figures (something I never thought I'd be able to say) including the standard Mario, the 2-4 Mario, the classic Fire Mario, the indestructible Gold Mario, the water-hating Cat Mario, the industrious Mario Maker Mario, the take charge Mario with Cappy, the high flying Racoon Mario, and the magical Tanooki Mario.