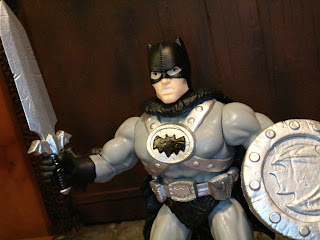 While last year's Amazon exclusive DC Primal releases were riddled with quality control problems, 2019's Target exclusive rerelease of series 1 fixed those problems. Heck, not only are the figures better but the presence of the tie-in DC Primal Age comic book and other merchandise along with the ability to see these figures, beasts, and the Batcave playset setting on store shelves was a major improvement for the line. While series 2 is just starting to show up, Target has one more surprise in store: An exclusive black and grey Batman. This is exactly the same figure as the standard release Batman except that he's in a darker color scheme this time. To be honest, I really never need much coaxing to buy another Batman figure, so Target had me sold on this one from day one. This guy has been showing up in stores over the past 2-3 weeks and usually seems to be found in the regular toy aisle along with the rest of the (very limited) Mattel DC offerings. When is a repaint more than a repaint? Let's find out after the break... 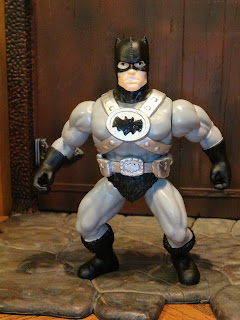 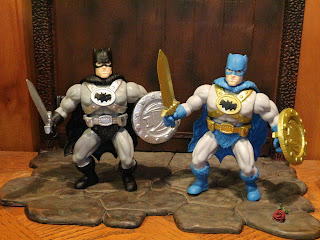 *  On the left is the Target exclusive black and grey Batman while the (also technically Target exclusive) blue and grey Batman is on the right. These are absolutely just color variants of each other, so if you have one you know what to expect from the other. For the full scoop make sure to check out my review of the standard DC Primal Age Batman as I'm mostly pointing out what's new here or the differences. 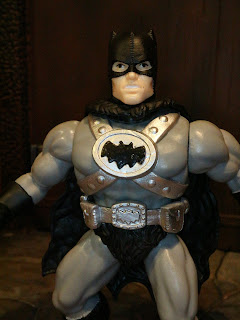 
* Again, this is a simple repaint of the standard Batman. The grey of the batsuit is a bit darker while the blue details are replaced with black. I actually like how the gold He-Man like harness and classic utility belt are cast in silver here. It's a different look, as Batman doesn't typically wear silver, but it fits the Primal Age theme well. the articulation and sculpt are the same as on the standard release. 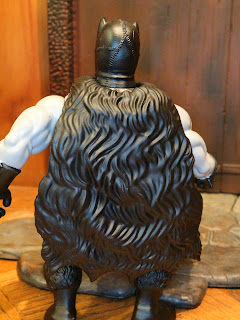 * Bruce is sporting a furry black cape. It's the same easily removable mold as the cape included with the regular blue and grey Batman but the black makes a bit more sense. I my experience, it's typically easier to find creatures with black fur to make capes with when you're scavenging in a savage, primal wasteland rather than finding beasts with blue fur. 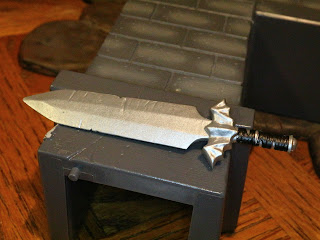 * I love this sword. I actually might like it in silver better than the gold of the first release. I've long been a fan of the Kenner Legends of Batman line and this feels like a sword design that could have come from that series. I mean, look at that blade? It's just so chunky and awesome looking. And that hilt? I dig it man, I dig it. It's incredible! 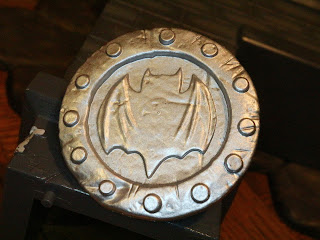 * The shield is awesome, too. It's got a massive bat on it with lots of sword and sorcery styled flair. The gold color is perfect, too. This is another piece that's just aces. 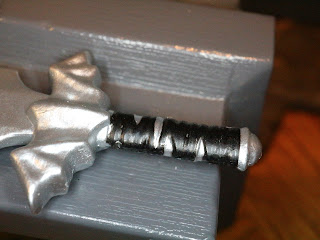 
* My only complaint here is that the paint on the handle, which looks great, scrapes off far too easily onto Batman's hands. 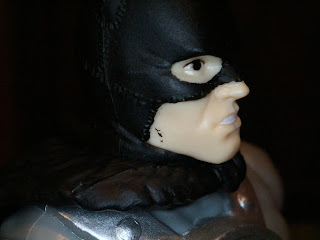 * Thee are definitely a few noticeable errant paint marks on this guy, particularly around the boots and on Bruce's right cheek. 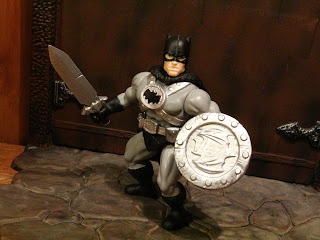 This is a pretty cool paint variant. While it's another Batman figure, I think most fans of DC Comics would agree that you gotta have the option between a black and blue suited Batman. While this figure has more paint flaws than the standard release, he's still a really cool figure. I'm not sure if I like him better or not than the blue and grey suit (that one seems more fitting for the line, though the black is really cool and a more "realistic" color for a fur and leather outfit) but I do like having a second Batman: One to ride Ace and one to chill out on top of the Batcave. This is a Great figure and a another solid hit for Funko in the DC Primal Age line.

I've reviewed so many Batman figures that he has his own review gallery: Check out the Dark Knight Gallery for more reviews.