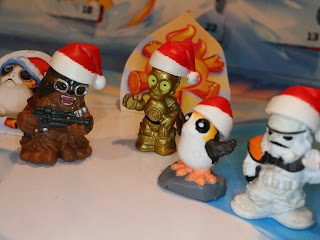 Yes, we're near the end of January. Yes, I'm reviewing an Advent Calendar. I actually didn't hear about the Star Wars: Micro Force Advent Calendar until after Christmas so I tracked mine down in early January. I got it on clearance, too (although I've hear they're down to around $8-$9 dollars at Target). Star Wars: Micro Force is a fun little line although the fact that they're typically blind bagged mixed with the terrible distribution of the single packs means there are a few of the series I haven't even seen in stores. The Advent Calendar is a fun idea and includes figures from the various series released thus far as well as some "exclusive" figures for this set. I'm going to buzz through these pretty quick, which is kind of the opposite of the intent of an Advent Calendar, but considering we're far past Christmas and Epiphany, I think we're OK. Light your advent wreath and join me after the break... 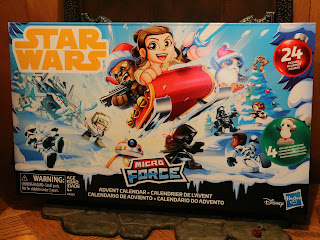 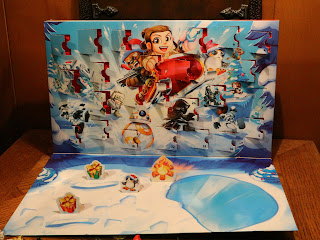 * The box folds down into a display scene. The back of the box features the 24 compartments that open up (it's cardboard over a plastic tray, like most advent calendars) while the folded down base is a winter scene (Hoth?) with four pop up elements. There are two packages, a campfire, and a Porg wearing a Santa Claus hat. It doesn't stand up on its own, so you'll have to lean it against something to keep it in place. 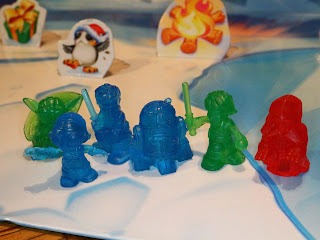 * There are 24 figures included in the set and six of them are holograms. You get: 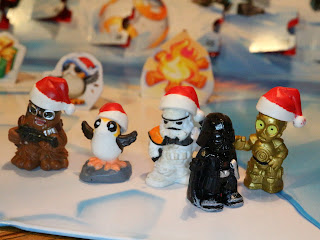 * Next up are the Christmas variants. These are really just rereleases of previous figures with little Santa Claus hats glued on their heads. Well, except for Darth Vader. His boots are covered in snow! You get:
Chewbacca (Vandor-1)
Porg
Sandtrooper
Darth Vader
C-3PO 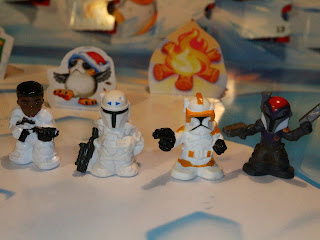 * There are a few other "armored' characters, too! 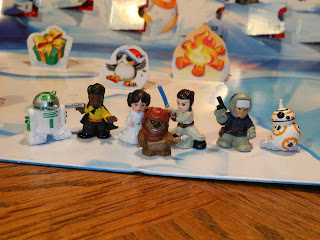 * For heroes, you've got a decent selection: 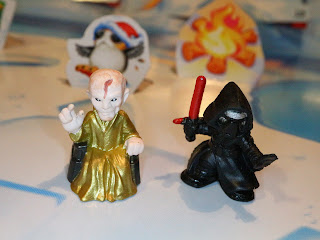 * Last, but not least, we get two Sequel Trilogy villains. 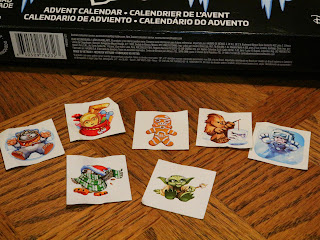 * The set also comes with seven stickers that are placed inside seven of the advent calendar doors. They're kind of fun and feature such silly things as a Stormtrooper gingerbread man cookie, Yoda roasting marshmallows, and Han Solo literally frozen in a block of ice. 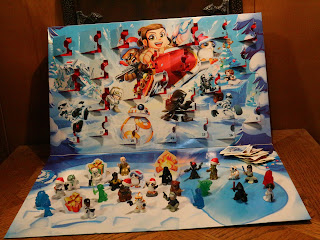 Had I known about this set before Christmas I would have tracked it down and opened one a day. Getting it after Christmas, I simply opened it up. I paid around $20 for it, so it cost me less than a dollar a figure which is cheaper than normal for Micro Force. I only ended up with four true duplicates, so that's not bad. Whether you are purchasing this for your kids or yourself to open next year or you just want the figures, how appealing this set is is based on how many of these you already have. Overall it's a Good and a 1/2 set with lots of coolness for the Advent season.


Surprisingly, I haven't reviewed that many other BB-8 items. Just the Black Series Rey and BB-8.

If you also have a Boba Fettish than check a couple other Boba Fett toys on the site, including the Black Series Boba Fett, the Walgreen's exclusive Boba Fett (Prototype Armor), both the standard Hero Mashers Boba Fett and the Han Solo Vs. Boba Fett two-pack version, the Funko POP! #102 Boba Fett, and the Micro Machines Bounty Hunters set as well as Fett as a background character in the Bossk Micro Machines Mini Head and in the 4-LOM Mini Head.


If you're looking for another Finn review, check out my reviews of the Black Series Finn (FN-2187) , Finn (First Order Disguise), and Finn (Jakku), as well as the micro figure of Finn included with the Micro Machines First Order Star Destroyer playset and the Micro Force Finn (FN-2187).

If you're looking for more Kylo-Ren inspired products, check out my reviews of the standard TFA Kylo Ren, the TLJ Kylo Ren, Kylo Ren (Throne Room), and the K-Mart exclusive Kylo Ren (Starkiller Base) set, as well as the SDCC 2016 Kylo Ren Unmasked. Of course, a miniature Kylo Ren also came with the Micro Machines First Order Star Destroyer playset. Oh, and there is the Micro Machines Kylo Ren Playcase, too!


If you're all about Porgs, check out the Black Series Porgs set.

If you're also a fan of Sabine Wren, check out  If a few other Sabine toys on here so far: The two pack of season one Sabine Wren and a Stormtrooper and the single carded season 2 Sabine Wren from Hasbro's 1/18th scaled line, the Black Series Sabine Wren, the POP! Sabine #135, and the Walgreen's exclusive Sabine [Helmeted] POP!.

This are the first figures R2-A6 and Wicket W. Warrick I've reviewed on the site.