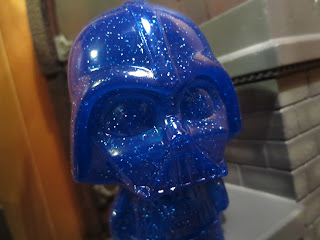 Today I'm going to start checking out some of the goodies from the most recent Smuggler's Bounty box from Funko and I figured I'd start with the big guy himself, Darth Vader. This month the Smuggler's Bounty box not only includes two Funko POP! figures but also a Hikari Minis. I've heard of Funko's Hikari line of vinyl figures but I've never owned one before. They're kind of an homage to the Japanese Sofubi styled figures but available more readily in US Markets. I didn't know there was a mini line of these coming out, so Darth Vader is a cool way to kick things off. He's available in five different colors at random in the boxes: Red, Black, Silver, Gold, and Blue. Ready for a closer look at a cute, glittery, vinyl version of the guy everyone is waiting to see in Rogue One? Then join me after the break... 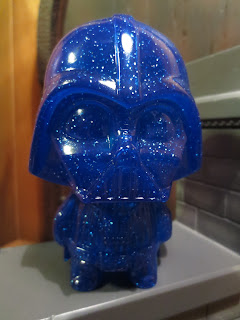 Non-Scalper Price: $25 dollars as part of the Smuggler's Bounty box which also includes two exclusive POP! vinyls, a pin, a patch, and a Rogue One t-shirt. 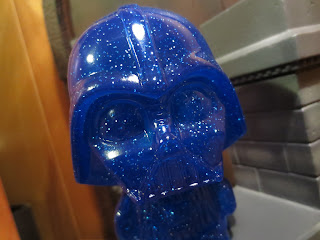 * The Hikari style is different. The figure is overall less caricatured than a POP!, but the body seems a bit more deformed with stubby legs. The sculpt isn't as sharp as on a POP! but there's definitely a nice style to it. The vinyl used here is hollow and actually a bit squishy. I kind of like the feel of the figure. 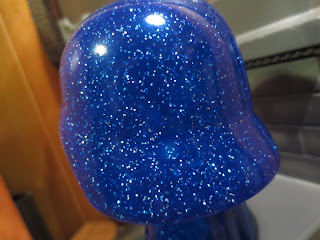 * The thing I definitely like the most about this figure is the color scheme of the plastic. The translucent blue plastic with glittery stars just looks incredible. While getting the glittery black plastic figure might have been even cooler, this blue definitely conjures images of some Star Wars marketing and licensing items of the past. It's a cool concept and definitely is very eye-catching. 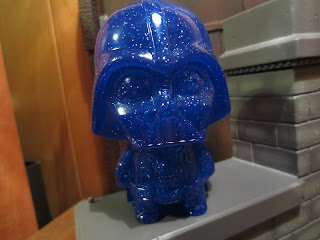 You know what? I kind of like this guy. He's different and I couldn't see myself really getting into these, but due to the iconic status of Vader I don't mind having this sitting around one bit. Again, I love this blue color as it looks fantastic as a translucent plastic with a great glitter effect. This is a cool little extra for the Smuggler's Bounty box and a Great little designer vinyl figure.