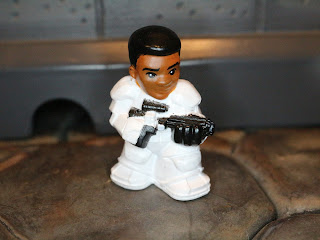 Guess what I'm checking out today? Am actual new sculpt from the Star Wars: Micro Force line by Hasbro! While series 1 of the Star Wars: Micro Force line simply reused figures from the older Fighter Pods line Series 2 introduces new sculpts from the newer Star Wars films. Today I'm checking out Finn, AKA FN-2187, in his First Order Stormtrooper gear. While Finn didn't wear his outfit long in The Force Awakens he certainly wore it during some character defining scenes. Let's take a quick look at this minifigure Finn after the break... 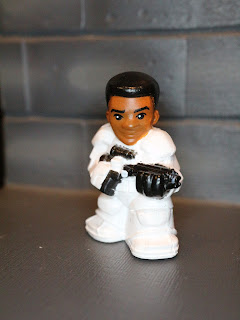 * Toys of the heroes wearing Stormtrooper and Clone Trooper gear has a rich history in Star Wars fandom so there is definitely something familiar and comforting with Finn decked out in trooper gear. He's wielding the F-11D blaster rifle, too. The blaster kind of blends into the armor since it has white elements to it but, overall, this is a sharp looking little figure. 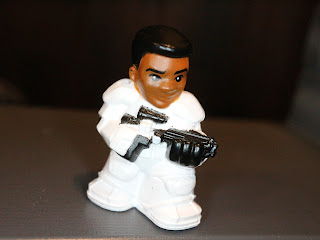 Finn isn't the most exciting figure in this new series (I would have rather seen him in his more common outfit) but he isn't bad either. He's a Good little mini of one of the main three from the Sequel Trilogy so you can't say that he's a bad pull.


If you're looking for another Finn review, check out my reviews of the Black Series Finn (FN-2187) , Finn (First Order Disguise), and Finn (Jakku), as well as the micro figure of Finn included with the Micro Machines First Order Star Destroyer playset.