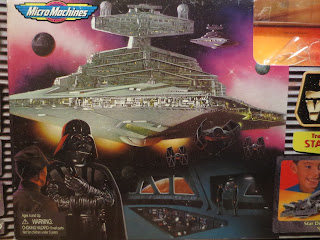 Today I'm doing a very special review from one of my favorite toylines of all time: Galoob's Micro Machines Star Wars! Not counting the vintage figures that made their way into my G.I. Joe collection when I was quite young, Galoob's Star Wars Micro Machines were the first Star Wars toys I ever collected (even before the POTF2 line). I started collecting them in early fall of 1995 and continued pretty strongly throughout the line's life until the Episode I Micro Machines hit. While I didn't have every vehicle or figure set, I did have most playsets that were released. Well, all except this one which I didn't own until just recently. While the Millennium Falcon playset was a pretty popular item, later in the line's life (around late 1997 and early 1998) Galoob began releasing more transforming sets that resembled various vehicles. Most fans remember the Double Takes Death Star but fewer remember the Slave 1 that transformed into a Special Editions inspired Tatooine or the Rebel Transport. I'd be willing to argue that this Star Destroyer playset is quite possibly the rarest playset in the line and is definitely not something many fans will remember. While the packaging says it turns into a Space Fortress, I think the interior still feels very much like the interior of a Star Destroyer and makes a great playset. Ready for a super cool look at this great playset that is now almost 20 years old? Then join me after the break.

Oh, and that box in the picture above? Yes, I did buy this thing sealed only to open it up, apply stickers, and play with it like I was in Middle School all over again. And yes, I totally sat around and played with Micro Machines all through Middle School. I'd do it again, too. 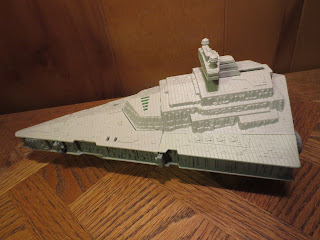 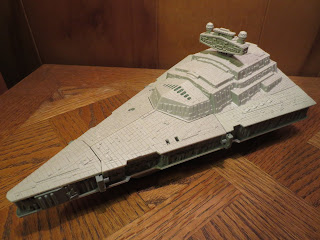 * Throughout this review you'll probably see me making a number of comparisons to Hasbro's First Order Star Destroyer Playset that was released last year as part of their Micro Machines relaunch. While Galoob's Star Destroyer is a bit smaller and shorter, just look at the level of detail on it compared to Hasbro's. The paintwork, while minimal, is better too. This ship just looks fantastic, particularly impressive considering it is almost two decades old. 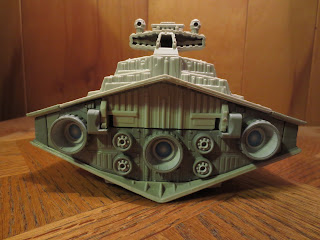 *Here's a quick look at the rear engines, too. There's clearly two different colors of plastic here that don't align perfectly but, overall, it's a decent effect, particularly considering that the Star Destroyer is really just a shell for the playset inside. 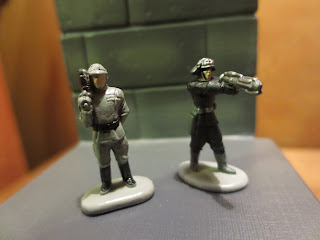 * The set comes with four figures, the first two of which are an Imperial Officer standing at attention with his blaster held up and an Imperial Naval Trooper firing at a target. Both of these figures are reused sculpts from the army-building figure packs, but the paint jobs actually look a bit sharper. 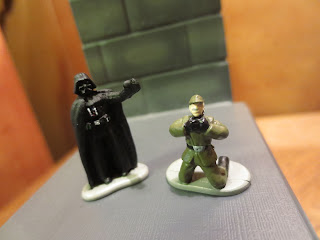 * The real treat here is Darth Vader, extending his left hand to deliver a Force choke, and the second Imperial Officer who is on his knees futilely resisting a Force choke. This Vader is insanely detailed: Not only is his bodysuit actually textured properly but the individual buttons on his chest piece and belt are painted. You can even see a lightsaber on his belt! These two figures are two of the coolest microfigures Galoob ever created and a true testament to their mastery of the Star Wars license. 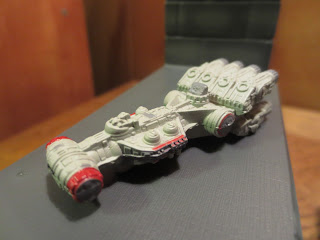 * This set comes with two vehicles, although you might not consider the second one a true vehicle. The one that absolutely is a vehicle, though, is the Rebel Blockade Runner. This has always been one of my favorite Micro Machines and it's cool to see that it was included in one of the playsets. It looks so similar to the standard one included with many other vehicle packs but this one actually seems to be just a bit shorter than the original with sculpting that might be a bit sharper. 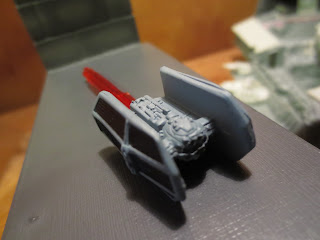 * Darth Vader's TIE fighter was released multiple times in the Micro Machines line (most significantly in the Stormtrooper/ Death Star transforming playset) but this is an entirely new mold. It's smaller and more compact because it actually functions as the head of a missile. Yes, this TIE fighter actually launches out of the nose of the Star Destroyer. That's why I'm not sure I consider this to be a true Micro Machine vehicle; it's more like an accessory. 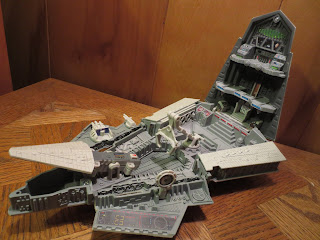 * The set opens up by folding up the main bridge, folding down the left and right sides, and elevating the forward nose of the ship. It's not as intuitive as some sets but it looks great opened (and it stays opened, unlike Hasbro's piece of junk) and has a lot of room to play. 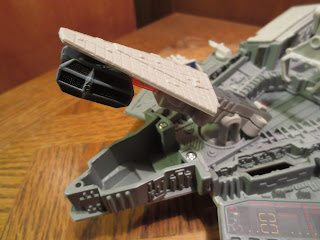 * Possibly the most "questionable" feature of this playset is the missile launching TIE prototype. The nose elevates and can pivot, allowing you to launch Vader's TIE fighter in any direction you would like. It launches fairly far and is kind of a neat feature. I was never big on the missile firing features on Micro Machines stuff but this one is kind of interesting. If you don't like it, it is quite unobtrusive and gives you a place to store a couple of microfigures. 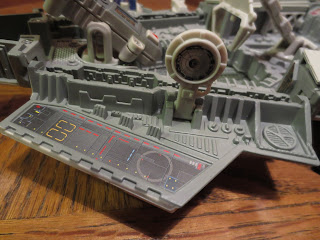 * The left side of the set folds down into a "landing strip" with a radar dish that flips up. This is a cool place to land a TIE Fighter and gives some more room to play. The radar dish is a bit underwhelming but the sticker on it is really nice and detailed. 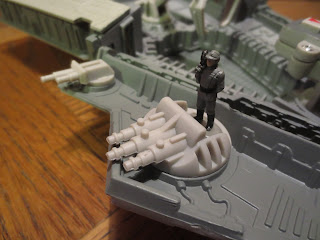 * On the right side of the ship (starboard, I believe)  get two rotating turbo lasers. And guess what? Unlike Hasbro most recent Star Destroyer, these ones are actually on the edges of the ship so they can be used in battle! You can even place a trooper on on of the turbo lasers to serve as a gunner. 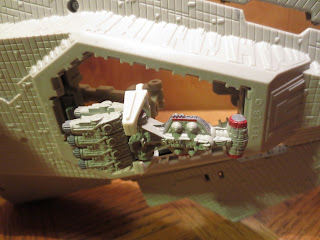 * Probably the best feature in this set is that the bottom hangar of the Sta Destroyer opens up and has a claw that you can use to raise and lower vehicles. The back of the box calls it a "tractor beam," so maybe it's intended to be secretly invisible during play. The only negative thing about this is that the peg that attaches to the vehicles attached via the bottom, meaning that vehicles are pulled in upside down. It's not a big deal, especially on a ship like the Tantive IV, but it's definitely an odd design choice. 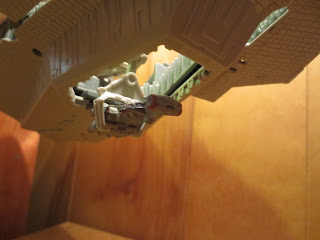 * Want to know the best thing about this feature, though? Since the bottom of the Star Destroyer opens up you can recreate the beginning of A New Hope with the Tantive IV being pulled into the grasp of the Empire. Far our, right? I love this. I flippin' adore it! It's possibly one of the greatest things Galoob ever devised with Micro Machines and it again shows how much they loved the property. 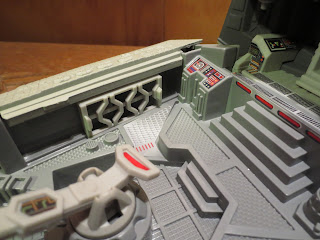 * Further back on the right side of the ship is a detention cell which can hold a couple microfigures. It's cool and all, but I think Galoob really should have tried to incorporate Vader's meditation chamber in this set. 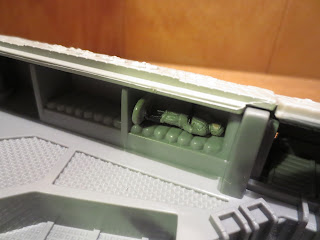 * On the other side are two bunks for the crew. Yup, now the Stormtroopers have a place to go and slack off. Hey, this would be a great place to put the injured Stormtrooper from the Stormtrooper/ Death Star playset, wouldn't it? 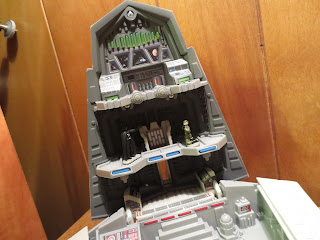 * The entire rear tower is quite impressive. The stickers are extremely detailed and give this tower the feel of the busy interior of a Star Destroyer bridge. There's also a working elevator that transports figures from the lower level to the middle level using the exterior Star Destroyer bridge as a lever. 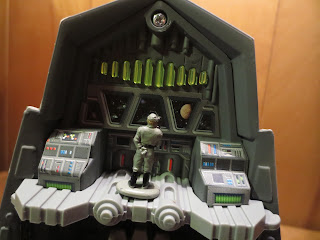 * Check out the main bridge! I love the translucent green pieces that give it a cool glow and the stickers that beautifully show what's going on outside. This is a great place to reenact scenes from Lost Stars if you're a fan of that book! 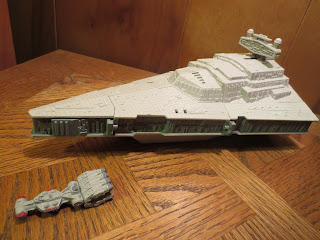 By adding this piece to my collection I now own every Star Wars Micro Machines playset Galoob produced prior to the Episode 1 line (I'm working on that series next as there are some fairly uncommon pieces in that line, too!). I'm really glad to have this set and it didn't disappoint. While I wish I had owned it years prior, I'm sure glad that I was able to experience the sheer toy bliss that opening a Micro Machines set from Galoob always gave me. This is another Epic set from Galoob and is well worth tracking down if you're really trying to complete this stellar toyline. Hasbro has a lot of improving to do if they want to ever make playsets as good as Galoob's.


Of course, I have mentioned the Hasbro First Order Star Destroyer Playset, which I really do loathe. If you're looking for more Micro Machines reviews, check out the following: