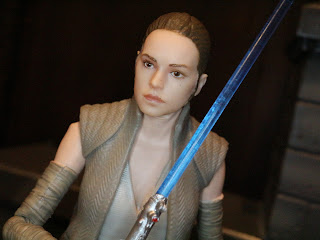 Today I'm checking out a Star Wars figure that I've been waiting over two years to get: Rey in her Resistance Outfit. Hasbro is calling this one Rey (Island Journey) rather than Rey (Resistance Outfit) like the 1/18th scale The Force Awakens figure as she does have elements of her appearance in The Last Jedi such as her oversized cloak but, make no mistake, this is the Rey from the end of The Force Awakens that delivers Luke Skywalker his lightsaber on the mysterious Ahch-To. Groovy! As a 2018 new release Rey takes advantage of the face printing technology that Hasbro has been using on some of their Marvel Legends figures. That means you're getting the most realistic Daisy Ridley likeness you are going to find in this scale! Let's check out this cool new version of Rey after the break... 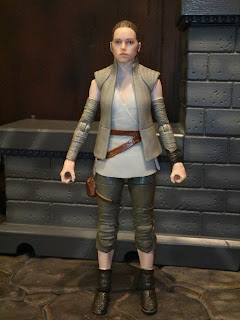 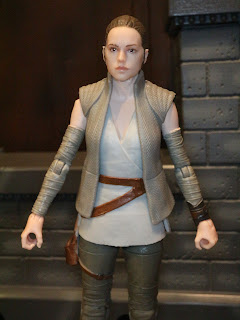 
* I love this outfit and I kind of wish Rey had worn it a bit more in The Last Jedi. It's a very cool look that mixes a few different styles together. Technically the vest is removable but it is very tight. So tight that I'm not sure I'd be able to get it back on. Still, if you wanted a Rey figure with a different appearance, you could remove it. 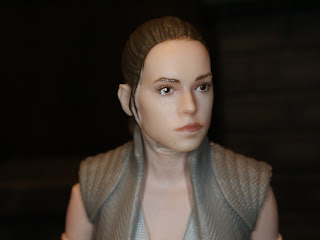 * Here is a close-up of the headsculpt so you can see just how excellent it is. I think we've always know that Hasbro has created solid headsculpts but the paint has held them back from greatness. Not any more! This new printing method is incredible and really gives the character a very life-like appearance. Remember: Most likely the screen your reading this on is displaying this figure as being larger than life. Being just a bit shy of 6 inches, this is incredibly lifelike for that scale and nicely resembles Daisy Ridley. 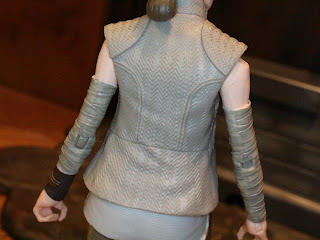 * The texture on the vest is very impressive. I love the detail in the fabric and the various sculpted details. 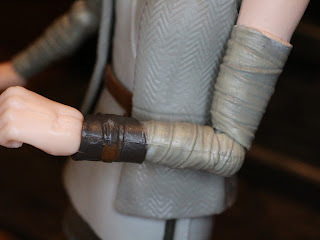 * I also really like the detail work on the arm wraps and the wrist guards on Rey's right wrist. 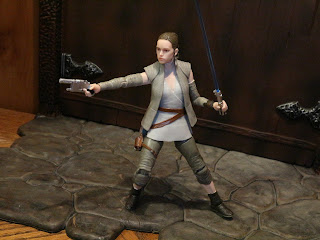 * The articulation is excellent, which has been the case with most of the Black Series figures. The Black Series definitely has one of the best blends of plentiful articulation with solid sculpting available at mass retail. Rey can take some excellent poses and is just a delight to mess around with. She's sturdy, too, so no worries about breakage. 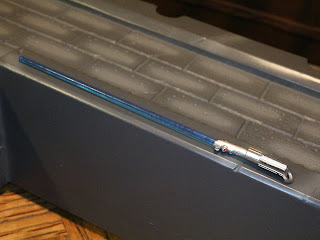 Re absolutely includes the Skywalker lightsaber. You know, the lightsaber that Anakin built that Obi-Wan took and gave to Luke who lost it on Bespin and somehow made it's way to Maz Kanata who gave it to Finn who used it for a bit but was later wielded by Rey who took it and gave it back to Luke who chucked it over a cliff where Rey found it and.... yeah, that one. Plenty of figures have already been released with this lightsaber, so you know what you're getting here. The blade does separate from the hilt, of course. 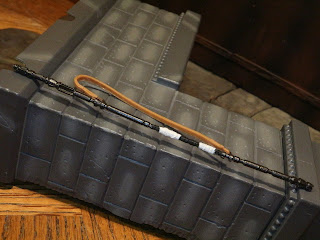 * Rey also comes with her signature staff. It's not perfect, but it seems to have a bit sharper of a sculpt than the Jakku verson of Rey had. I think the strap is more effectively placed, too, so that Rey can wear it across her shoulders. 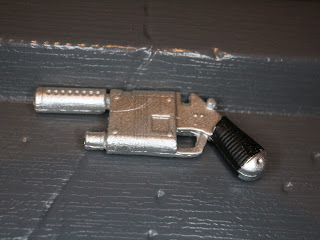 * Rey's third now "signature" accessory is the NN-14 blaster pistol that Han Solo gave to Rey on Takodana. This is an incredible design and Hasbro nailed it. The weathering on it is pretty slick, too. 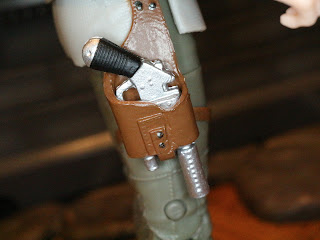 * The blaster fits perfectly into the holster on Rey's right hip. Nice. 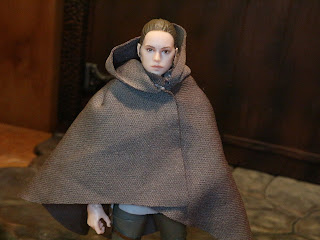 * So, Rey comes with an oversized poncho and it's...just OK. The quality is good; the materials feel sturdy and durable with nice stitching, but the fit just seems kind of awkward. The hood seems cool but it is sewed to the back of the poncho/ cloak. 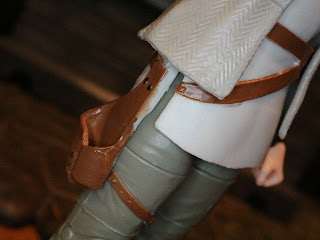 * Rather than being a separate piece like most other holsters in the line Rey's holster is molded as part of the bottom of her shirt. That's not bad in and of itself but the holster splits where the cut in her tunic is which makes things look a little awkward. 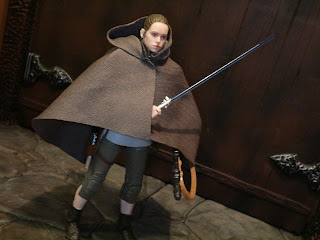 Despite the oversized cloak Rey (Island Journey) is still one of the best figures yet released in the Black Series. It's nice to see Hasbro continue to improve this line and the introduction of the face printing into the line definitely makes 2018 a tremendous leap forward for the line. If Hasbro can continue to improve the distribution and case pack ratios for this line while moving along with more fan favorite and Original Trilogy characters than The Black Series could be an unstoppable juggernaut in the 6 inch scale market. Rey is an Epic release.


For more Star Wars: The Black Series figures, check out the following: