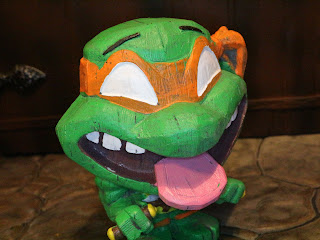 Today I'm checking out the last item from the very cool box of stuff that FOCO sent me last month and it just so happens to be another Teenage Mutant Ninja Turtles Eekeez figure: Michelangelo! This party dude really looks incredible in the Tiki inspired aesthetic of the Eekeez line, doesn't it? I'm really a pretty big fan of this line and I hope to add the other figures from it (Raphael, Donatello, and the Shredder) to my collection in the near future. As someone who has collected various Teenage Mutant Ninja Turtle figures since 1988, it's nice to see there are still unique depictions of the TMNT to be had. Let's check out Michelangelo after the break... 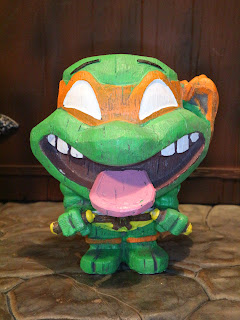 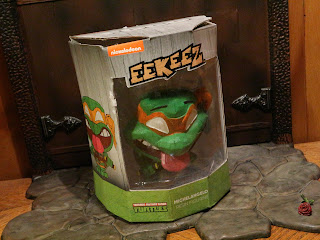 * Michelangelo's packaging is the same as Master Splinter's, another series 2 figure. It looks good and I like the semicircular box design. Unfortunately, Michelangelo was leaning forward in the package. Somehow he got jarred loose in transit. These are pretty collector friendly packages so you could easily replace him if you want to keep him in the package. 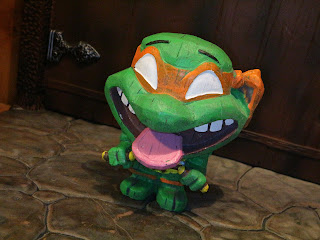 
* All of the TMNT figures I've reviewed thus far have looked really cool but Michelangelo might be the best fit for this aesthetic. Does this guy just totally mesh with the Tiki inspired design or what? He's bright, colorful, and absolutely fun! 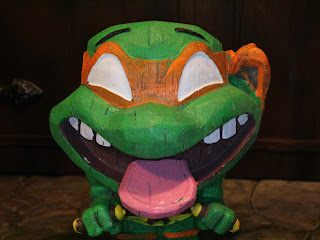 * The headsculpt is incredible. Again, in case you're just checking these out for the first time, they're designed to look like painted wood. They're actually cast in resin but your eyes probably won't believe that. They really do have an impressive, hand carved appearance to them. 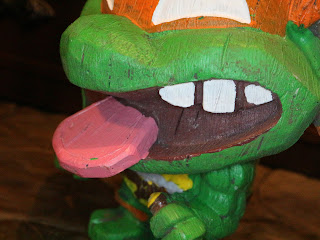 * I love the work on the teeth and the tongue. It's really cool to see these unique design elements included on each figure! 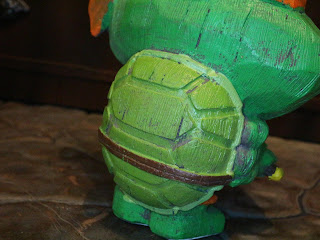 * Even simple details such as Mikey's shell are well done. The way the paint is applied further adds to the handmade, wood carved vibe of these guys. Guests checking out your collection will definitely want to put their hands on these as they have such a unique look to them. They won't believe they're not wood until they touch them! 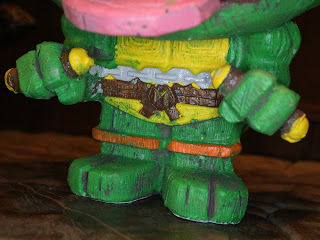 * Mikey is wielding his nunchuks, connected via a sculpted chain. Well, the chain is a sculpted part of his chest but it's pretty convincing in person, and keeps the figure from having anything that is easily broken. Little details such as the swirls on his plastron and the various textured elements on the skin add to the appeal.

I really hadn't heard of FOCO's Eekeez figures prior to receiving these in a box from FOCO, but I really like them. They're incredibly well made and just stand out on the shelf. There are lots of stylized vinyl figures available these days but these definitely have an edge due to the unique aesthetic. The hand carved wooden appearance and slightly rough paintjobs on these just ooze coolness. Michelangelo is a Great and a 1/2 collectible item and is well worth adding to your TMNT collection. FOCO still has him in stock, so scoop him up if you're interested!

If you're a fan of Michelangelo, I've reviewed a few other figures from the 2012 toyline including Mikey the Elf and Stealth Tech Michelangelo, along with the Playmates Michelangelo (The Secret of the Ooze, 1991) from the Classic Collection.

The subject of this review was provided to me free of charge by FOCO.
Posted by Barbecue17 at 1/18/2019