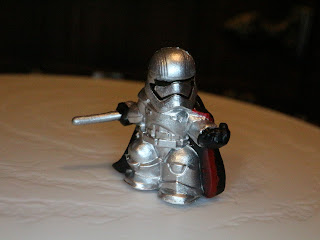 Hasbro has started putting the Star Wars: Micro Force figures in new lightsaber packaging and is now calling the line Star Wars: Micro Force Wow! While the name and packaging are different, the figures are the same as the previous Micro Force figures, which are essentially the same as the Fighter Pods figures from a few years back. I'm pretty sure these are all new sculpts, though. One of the figures I got in my pack was Captain Phasma. While Phasma's not one of my favorite characters or anything, she definitely does have a great look.  This figure depicts Phasma with her Quicksilver Baton from her battle with Finn in The Last Jedi. Ready for a quick look at a small figure? Then join me after the break... 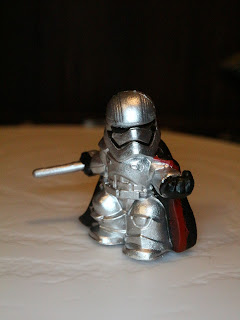 Non-Scalper Price: $8 for a pack of 4 figures

* I like that Phasma is in a bit of an action pose. The paintwork is really nice on her with a great silver color for her armor. Having her baton behind her back with her left hand in a "come and get some" pose just looks cool. These are really detailed little figures for being less than an inch tall! I definitely hate the blind bagged way these are sold but I can't knock the figures themselves. Interestingly, the packaging always calls these "squishable" but these are made from a very firm plastic that is only the least bit rubbery. 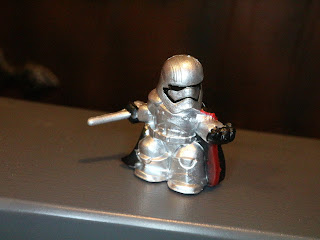