Micro Review: Collection I from Micro Machines: Star Wars Episode I by Galoob 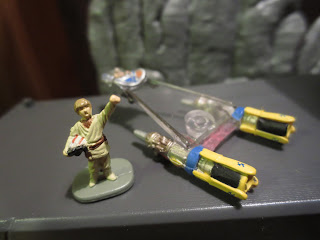 I'm so into Micro Machines right now and as I'm filling in some gaps in my collection I'm also bringing you some reviews of cool, classic Star Wars product. Today I'm looking at the first pack of the smaller carded Micro Machines sets released for Episode I: The Phantom Menace. I remember these being out but I didn't collect many of them at the time as I was more interested in the traditional 1/18th scaled figures. These were cool sets that I remember thinking had bizarre character selections. There were lots of B and C list (even Z list, possibly) characters in them which is always cool when it comes to Star Wars, but which seemed weird when it was really hard to assemble the main film cast. This set gives you one of the top dogs, though, as you get a young Anakin Skywalker figure. Let's take a brief look at the first in a series of five of these short reviews, shall we? Join me after the break... 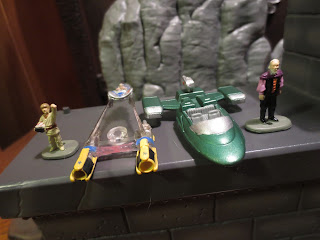 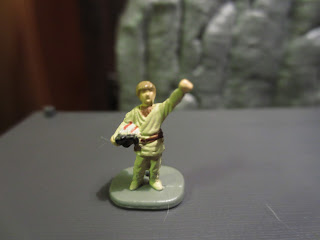 * First up is Anakin and, while he may be a small figure, he actually is really quite expressive. He looks pretty excited so perhaps this microfigure represents him having just won the Boonta Eve Classic. Look closely and you can see the goggles on his podracing helmet and the pouches on his belt. I love this little guy! Like the other Episode I Micro Machines figures, Anakin also has a hole in his base so he can fit onto the pegs on the various playsets. (By the way, if you appreciate Jake Lloyd's role in the Star Wars saga, go join the Facebook group "I Support Jake Lloyd!") This kid basically lived the dream and had the weight of the world on his shoulders, so let's let him know we support him. Let's also remember that the kid has the best line in a Christmas movie ever from his role in Jingle All the Way: "She's next door petting Ted." Classic! Watch the film for more context as it makes the line even better! 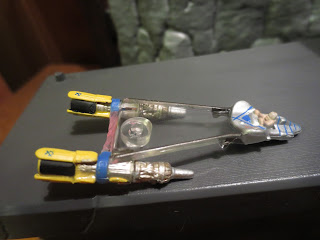 * Do you think Anakin's Pod Racer is the most iconic vehicle from Episode I? It may not be but I'm sure you could make a good argument for it! Episode I was all about podracing. While I think the scene drags a bit when I rewatch the film these days, at the time no one could get enough podracing. I still have a soap dish that's shaped like Anakin's podracer. That's legit. This is a nice looking vehicle and it's far more durable than you'd expect due to their being a clear plastic reinforcement between the pod and the engines. Too bad these sets didn't come with stands, though, and this one really needs one. 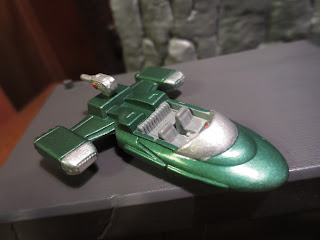 * What an incredible mini! The Flash Speeder was used by the Royal Naboo Security Forces in defending against the Trade Federation army and in retaking the Theed Palace. This is a brilliant vehicle with a beautiful paintjob; that metallic green is just gorgeous. The paint inside the cockpit is messy but that happens when you're painting teeny tiny buttons and levers. And yes, Galoob painted those. I've always loved the rear mounted cannon on these vehicles, too. It just looks cool. Naboo had some great architecture and vehicle designs, didn't it? 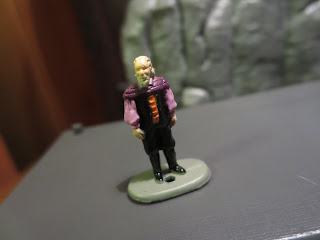 * Sio Bibble is the Governor of Naboo with the wicked cool beard that has freaking awesome line that I always remember from one of the Episode I trailers: "A communications disruption can mean only one thing...Invasion." That sounds so freaking cool and I'm going to say it the next time the phones glitch at my office. While Sio Bibble might not be the most exciting character, he did end up in all three prequels, so he has that going for him. I love how in Star Wars films and lore every minor character somehow feels significant. Oh, and this is a nice, detailed microfigure. Nice paint work, too. 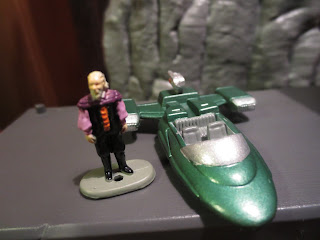 I really think Galoob made some strange pairings in these sets. Rather than try and create a play scenario in the package itself (something possible when including vehicles and microfigures) it feels like they kind of through some random figures together. Still, each figure is really nice and it's tough to not appreciate these if you're a fan of Micro Machines. The figures are both solid (Anakin definitely gets the edge, though) as are the vehicles (I like the Flash Speeder best). Looking back, I think this was a Good and a 1/2 set that at least paired up Anakin with his podracer, which was a good thought.

I've reviewed quite a few other Micro Machines sets from both Galoob and Hasbro, including: