Action Figure Review: Dylamug from Masters of the Universe Classics by Mattel 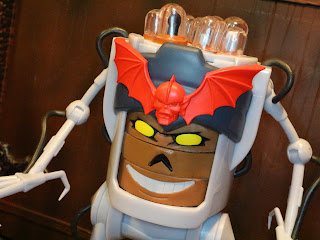 Over the next week I'm going to be wrapping up reviews of the stuff I picked up in 2018 that I want to make sure I review before I start my annual "best of the year" awards at the end of January. Masters of the Universe Classics is my favorite toyline of all time so I'm pretty glad that 2018 was the year that Super7 really started continuing the line. There were some incredible figures released this year, such as Karg, Quakke, and Wrap Trap, but there have been a few less than impressive releases as well. While figures with a true Filmation aesthetic have a home in the He-Man and the Masters of the Universe line, Super7 seems to be trying to work them into the standard MOTUC line, too, and the results are less than impressive. Dylamug has long been one of the most wanted figures in MOTUC due to his role as one of the earliest Horde villains in She-Ra: Princess of Power. Getting him as part of Super7's second series is a real treat but, aesthetically, he feels like he almost belongs more in the Filmation line rather than MOTUC. Join me me after the break so I can show you why. 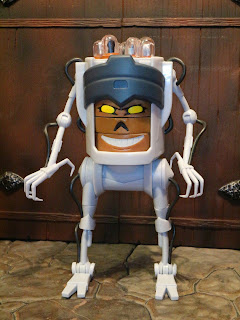 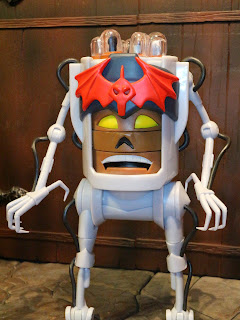 * Super7 really did do a nice job of translating Dylamug from the Filmation animation into a three dimensional poseable action figure. He is nearly spot on to the animation and makes for a really fun figure. While the world of MOTUC is quite unique and colorful, Dylamug's unique build still manages to stand out. 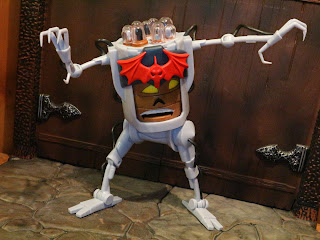 * Dylamug has a unique build and while his articulation is a bit limited, it's not bad. He has swivel hips, which are probably necessary to keep him standing upright since he's incredibly top heavy, so those are understandable. The other joints are pretty decent and feature some useful swivel/hinge joints. He feels fairly sturdy too, more so than I originally thought he would. 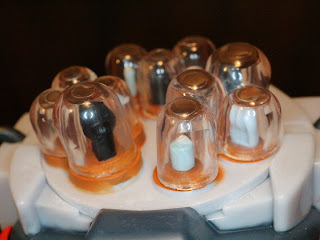 * One thing I really like are the various electrical looking tubes on his head. They're different sizes and filled with different little objects. They look great and really add a needed dose of detail and coolness to the figure. 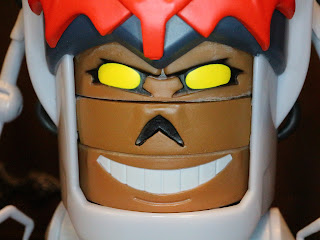 * I love Dylamug's evil looks! Unlike Man-E-Faces or Double Trouble (who both feature alternate faces), Dylamug actually has differently shaped eyes and mouths on two separate cylinders. Spin them and you have multiple expressions for the guy! They look great and really give you some fun display options! 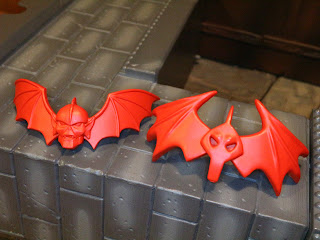 * To also give you more display options, Dylamug comes with two different Horde crests that fit on his forehead. One is a more animated looking crest based on the character's Filmation appearance while the other looks like a more traditional MOTUC inspired Horde crest. I prefer the more MOTUC inspired crest to help him fit in more with the 100s of other MOTUC figures I already own, but giving us options is always a plus. 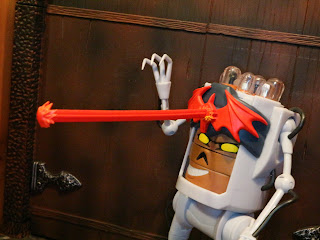 * To recreate Dylamug's ability to blast energy beams from his Horde crest, Dylamug comes with a special Horde crest with an energy beam emitting from it. It's a cool accessory and is pretty fun to mess around with. 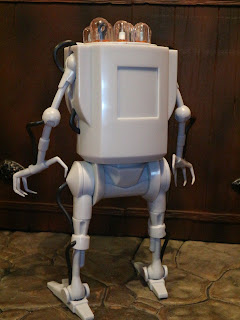 
* While there have been a few different styles running through the MOTUC line, overall the line has tried to do take Filmation designs and make them look a little bit more detailed. That didn't really happen with Dylamug as his body is just plain grey with little detail and hardly any paint application or shading. I really think that Dylamug should have been in the Club Grayskull line or he should have been given a bit more detail to "Classicize" him. 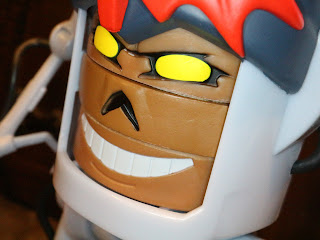 * It's not horribly noticeable but it's clear that the dials for Dylamug's eyes and mouth are a different shade of brown than the nose piece. 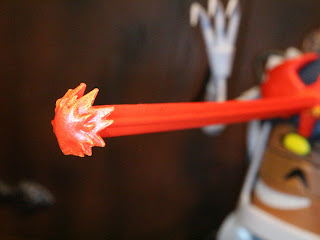 * Don't you think the energy blast would have looked better molded in a translucent plastic rather than being solid red and given some orangish yellow paint apps? I do. 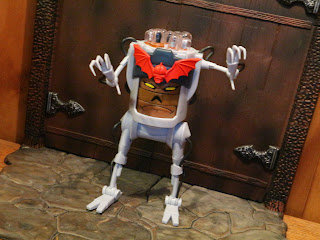 Dylamug is a Good 1/2 figure but I still don't feel like he belongs in MOTUC. He should have been in the Filmation inspired Club Grayskull/ He-Man and the Masters of the Universe line! He's a solid figure but for the heightened price he's just not as impressive as he should be. Super7 should soon be revealing the next series of Masters of the Universe Classics figures, so I'm hoping we'll see more figures that feature the detail and style we've come to expect. Dylamug is a cool figure but I can't help but feel like he's missing the cool embellishments and flourishes I expect from a Four Horsemen sculpt.


This is the first figure of Dylamug I've reviewed. For more Masters of the Universe Classics figures, check out the following: